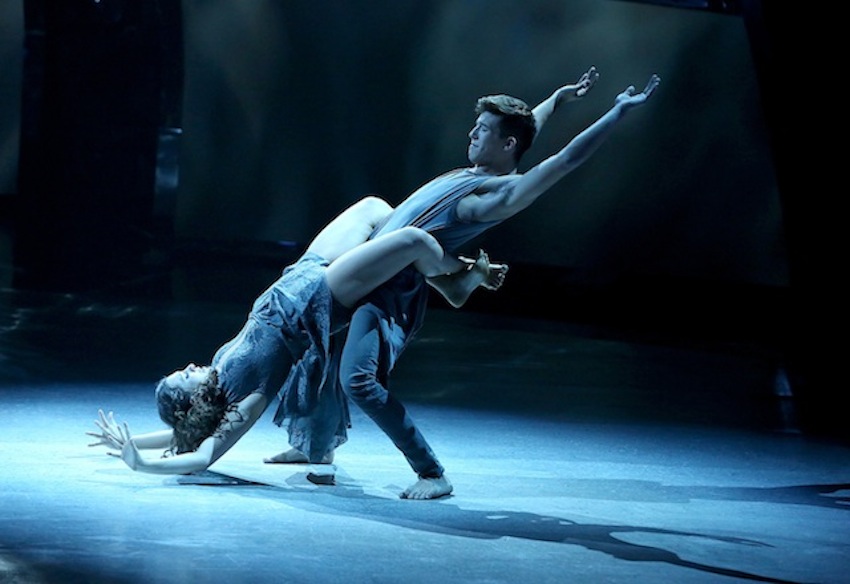 Welcome back, city kids, to the last show before the semi-finals. The stage is looking empty with only six dancers left, but they’re working overtime to fill the space. They each dance three routines: once with their original partners, once with an all-star, once on their own, and as part of a neon-DJ group number choreographed by Nick Demoura. Busy night.

With so much to do, Cat makes quick work of introducing Nigel, Mary, and returning guest judge Christina Applegate, and we get right into the first dance: Ricky and Valerie’s saccharine sweet Spencer Liff Broadway routine. Spencer takes a snapshot from Fragonard with a giant swing on the stage, which causes some entertaining problems during dress rehearsal when Valerie’s skirt catches on it. Fortunately that’s not an issue during the live performance, and it’s a great laugh. The routine is the perfect fit for Valerie too, who is sweet and glowing. It’s fun seeing her and Ricky together again.

Jessica and Casey burn up the stage with their Doriana Sanchez disco full of big complicated lifts and endless turns, often at the same time. Though good fun, it lacks footwork, which is highlighted by Nigel’s perfectly innocent comment about dancing in the clubs in the 1970s: when social dancing (which is what disco started as), you wouldn’t expect to throw your partner in the air like that, but performance dance has become all about the tricks. That doesn’t detract from this routine though; it just makes us a bit forlorn for social dancing. Christina also clued everyone in to one of those little known dancer’s secrets: holding in snot while dancing. Thanks for that visual, Christina.

Zacque (Zack and Jacque) dance a lukewarm fox-trot, the first of Jean Marc Genereux’s choreographies tonight. It leaves the judges (and us) wanting more. Fortunately for all three of them, their second dances are much better. Jean Marc’s cha-cha with Ricky and all-star Anya lights things on fire. Ricky looks like he’s been cha-chaing his whole life, and with Anya as a partner, that’s a tough feat.

Jacque’s Sean Cheesman contemporary number with Will abandons the metaphor of Nena’s “99 Red Balloons” (covered by Sleeping at Last) for a giant red ball and a literal downpour of red balloons. Though the choreography is lovely and the dancers perform it well, it’s a little obvious and the props aren’t necessary.

Jessica looks like an anime Lady Gaga in Ray Leeper’s crazy club jazz routine with Ade. Both of them look like they walked out of Weird Al’s “Tacky” video—not that there’s anything wrong with that. Mary and Christina both love the piece, with its wacky ragdoll hip-hop movements, but Nigel is underwhelmed. While we like it, we can see why he might feel that way: The music is at an in-between tempo (too fast for some movements and too slow for others), which makes some steps seem like they’re in slow motion.

Casey dances a breathtaking Stacey Tookey contemporary number with all-star Makenzie. The dancers tell the story of a couple on their last day together, and their movements rely on each other: climbing, leaning, supporting, and holding each other throughout, almost like contact improvisation. It’s emotional, stunning, and exquisitely danced.

Our two tappers take on hip-hop this week, and both do it flawlessly. Valerie and all-star Twitch perform a wedding dance choreographed by WilldaBeast. Twitch is surprised by how funky Valerie is “for a tapper,” but he shouldn’t be. Tap is funky! Valerie certainly steps away from her sweet, good girl image with this dirty, sexy, hard-hitting routine and an adorable wedding dress costume with a tearaway overskirt.

Zack dances the number everyone’s been waiting to see all week—if not all season—as SYTYCD finally brings back season 4’s Phillip Chbeeb as a choreographer. It’s about time. Chbeeb creates a wicked cool hip-hop duet for Zack with last year’s winner Fik-Shun, and they do not disappoint. The men create Rorschach shapes and shadow puppets while emulating Chbeeb’s unique popping style. It’s a tough job, giving something so idiosyncratic to others to carry out, but both dancers are great, dancing cleanly while keeping their own personalities. Zack goes one further by taking on the character while also showing his individuality.

Throughout the evening, the Top 6 dance incredible solos with nary a weak one in the bunch… except perhaps Jacque, whose cute ballet to the Andrews Sisters’ “Boogie Woogie Bugle Boy” is too incongruous. Whichever company makes the jeans Ricky is wearing should use his solo as a commercial; they move right with him through all his split leaps. We especially love Zack’s solo with its lightning-fast taps to Jason Mraz’s music. He must be so thrilled to see Mraz perform on the show next week (as are we).

With the dancing out of the way, as well as a performance by Rixton, it’s time to announce the Top 4, and it’s a bit of a surprise. Ricky, of course, is through, as is Jessica. Valerie is shocked to learn she made it through although it’s not as surprising to the audience since she hasn’t been in the bottom all season. The surprise is that Zack stays with her, leaving Casey and Jacque to retire from the show. We couldn’t be happier about this result. Casey is a wonderful dancer, but Zack has grown so much and it’s thrilling to have two tap dancers in the Top 4! A first!

What did you think, city kids? Are you as happy as we are that Zack’s in the Top 4? Were you hoping for a different result? Which is your favorite routine tonight? Let us know in the comments.