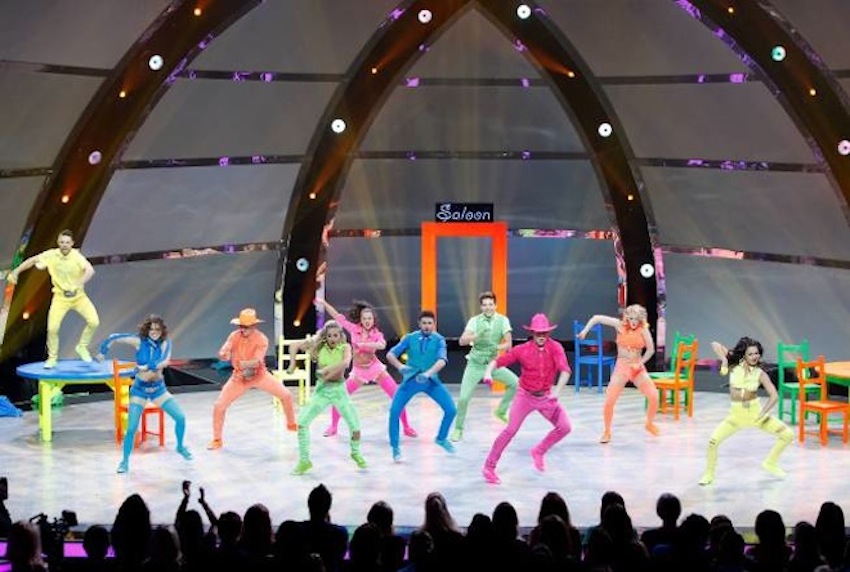 So city kids, tonight’s So You Think You Can Dance forces the contestants to step up their game as they work with the all-stars for the first time. The show brings a moving, fun night of dancing and a surprising elimination, as a hip-hop dancer with big fancy tricks goes home while a tapper stays in the Top 8. Hooray! Show producers also try a new technique, revealing the endangered couples as the night progresses, rather than at the top of the show.

Gold-medal figure skater Tara Lipinski joins Nigel Lythgoe and Mary Murphy at the judges’ table, as the show kicks off with a high energy hip-hop group routine from new (to SYTYCD) choreographer Jamal Sims. Nigel calls the dancers Neon Cowboys, and they sure are colorful, perhaps making up for how empty the stage looks with only 10 dancers. The entertaining routine features a couple of tap solos for Zack and Valerie, but for whatever reason, only Zack’s feet are miked (or dubbed).

The duets start with Bridget dancing a Bollywood Disco routine with all-star Brandon, choreographed by Nakul Dev Mahajan. Why they need to combine Bollywood and disco is unclear, except that Nigel made the comparison two weeks ago, primarily because of the non-stop energy required for both. It’s also unclear where the disco is exactly, except in the lifts. Both dancers gave the fast-moving routine all they had, though Brandon out-danced Bridget (this despite a slip following his aerial cartwheel). Bridget is the first dancer in jeopardy.

We’ve rarely met an Argentine tango we didn’t like, and Tanisha’s Miriam and Leonardo-choreographed number with Ryan is no exception. It’s so sexy and so exciting with great ganchos and really cool, difficult lifts. The ending is a bit abrupt and slightly off, but the rest is magical.

Finally, after weeks of wondering where they’ve been, Tabitha and Napoleon have finally returned for a hip-hop number with Emilio and all-star Jasmine. It’s kind of a bizarre concept—a snake wanting to dethrone a king (like this one?)—but it works much better than expected. The smooth popping and animated movements convey the sinewy, slithery snake motion well, and Emilio and Jasmine jump in and out of a basket in cool ways. It’s so great to have NappyTabs back.

Tyce Diorio asks a lot of Valerie for her jazz routine with all-star Ade; He wants her to be mean. She’s such a sweet, gentle person with a genuine love of dance that pretending to be cruel and hard turns out to be a bit too much of a stretch for her. His choreography is cool, especially the push-up Ade does with Valerie standing on his back, but as Mary points out, it’s a big step forward for her, but not quite enough. Fortunately, she’s still safe.

Lovebirds Jacque and Rudy dance in the same break, though not with each other. In fact, Rudy has to “have the hots” for all-star Jenna in a Louis Van Amstel cha-cha, while Jacque dances an ethereal contemporary ballet piece—the first ever on the show—with Chehon, choreographed by Travis Wall, who apparently wants to choreograph for New York City Ballet (now that they’ve made it known, it’ll likely happen). Both dancers do extremely well: Rudy is so hot that he wins a coveted ticket on Mary’s Hot Tamale train, and Jacque is called exquisite and breathtaking. We just wonder if there’s still as much of a love connection between the two dancers as they’re making it out to be. It’s certainly entertaining watching Rudy crack up Cat as she explains the voting process.

The amazing Ricky, who apparently is capable of absolutely everything except making a mistake, dances a deceptively difficult Mandy Moore jazz routine with all-star Lauren. He’s still so consistently great, while still growing, that Nigel says what we’re frankly all thinking: why should Cat bother opening the envelope when we know he’s safe? That final rolly-polly combination on the floor by itself is awesome. We love Mandy Moore, as a choreographer and as a person.

Despite Ricky’s impressive lead, Casey is able to match him with his exquisite Spencer Liff Broadway dance with all-star Kathryn. We know he’s got great technique, but he uses it in such a flawless way, and combines it with a caddishness that’s heartbreakingly stunning. Great choreography and a great song too: Liza Minnelli’s “Maybe This Time” from Cabaret. The only unfortunate thing is that with Casey also being safe, tapper Zack falls to the bottom.

All-star Twitch is cast as an old man (again?), in a fun and funny NappyTabs hip-hop with Jessica. Fake belly and grey hair aside, he can’t fool us: he’s still a brilliant dancer and engaging entertainer. It’s a tough job for Jessica to keep up with him, but she does pretty well. The concept leaves something to be desired, with old man Twitch lusting after young woman Jessica (who looks like Madonna in that 1940s hairstyle). The booty spanks are getting old, but the routine is good fun.

Poor Zack. He does the math and knows that he’s in the bottom two—and that it’s likely he’s going home since he’s up against Emilio. Despite his breathtaking performance in Sonya Tayeh’s moving contemporary piece with last year’s winner, Amy, he’s crying during the judges’ critiques—all of which are glowing. He’s a wonderful dancer, in all styles, and delivers what Amy calls his “wow” moment. Though was anyone really wondering where he’s been?

After SYTYCD takes a page from the Dancing With the Stars playbook, as all-stars Kathryn and Chehon dance to Christina Perri’s live performance, Cat announces the departing dancers—after much off-screen fumbling with the envelope. Turns out Zack needn’t be quite so emotional, as it’s Emilio who’s sent packing, along with his previous partner, Bridget. Rudy is presumably sighing in relief too, as his crush Jacque is also safe. That’s a fine result, as Emilio’s tricks have started to feel a little one-note, even though we know he’s not.

What do you think, City kids? Are you surprised by this turn of events? Did you also expect Emilio to be safe? Which was your favorite performance tonight? Are you looking forward to next week’s apparently all Michael Jackson evening? Let us know in the comments.