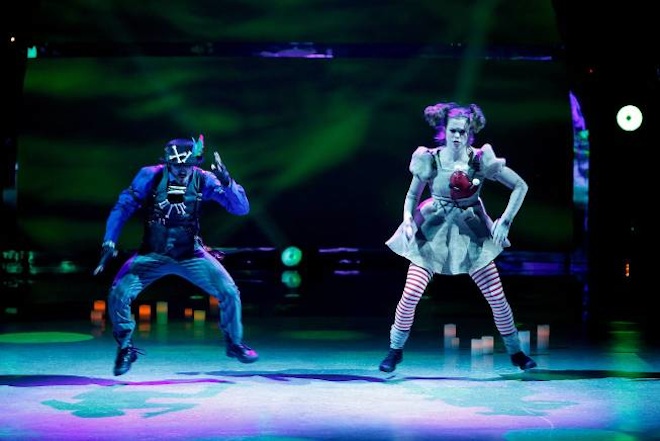 The summer is flying by and—bam—we’re suddenly into the Top 10 on So You Think You Can Dance. There isn’t as much fanfare this season, and it’s unclear why they have to rush and eliminate four dancers tonight instead of two, but they do. Another of our favorites is gone. Wah.

Bridget and Emilio kick the evening off with a great Ray Leeper jazz routine, the first of several demonic-themed dances. They both play stylish devils, strutting and popping across the stage in red and black suits and bowler hats, reminiscent of “What You Feel” from Buffy The Vampire Slayer’s musical episode “Once More, With Feeling.” The judges love it, and Christina, who is equal parts talkative and quippy, seems to blow her wad on this first critique, not clearly explaining what she thinks of the dancers’ faces during the routine and forcing Mary to be amazingly short and to the point. Maybe that’s not such a bad thing.

The red and black theme reappears in Rudy and Tanisha’s contemporary routine by Mandy Moore, who also choreographs the women’s group piece. The pair is lovely and sexy without being overt as they pull off many difficult lifts effortlessly. Though the package for the group routine led us to expect something more hard-hitting and funky, the seven women in the lyrical routine are strong and powerful, especially as Evanescence’s hard rock sound kicks in part way through the piece.

The wacky Jean-Marc Genereux returns for two ballroom routines, a vampiric paso doble (also in red and black) danced by Zack and Jacque, and a smooth, classy quickstep with Carly and Serge. Both pairs dance very well; Zack channels his best Eric Northman and Jacque holds her own. Serge and Carly dance beautifully, but at this point in the evening, it’s clearly too late to save them.

Teddy and Emily dance a Warren Carlyle Broadway that fizzles as it goes on. We also can’t help but wonder, what are they doing to Emily’s shoes? She slips again, a minor one that she recovers from easily, but she also slipped during her salsa last week.

Man, oh man. In the eloquent words of Christina, “Travis Wall, shut your face.” Travis remains the contemporary king tonight with a duo and a group piece, both of which are stunning. He maintains his flair for drama, turning feelings into physical expressions (that kiss!) and making us feel all that he feels. He finally gives Jessica another chance to show why she deserves to be here, with her new partner, Casey, who is a good match for her. The gorgeous routine features cool swinging moves and beautiful lifts that go so well with Hozier’s great song, “Like Real People Do,” which while slow and emotional, also has a propulsive energy to it (we may need to finally check out the iTunes page Cat is always telling us about).

Always great at choreographing for men, Travis’s group piece shows off the excellent Top 14 men as underwater sea creatures, waving and undulating like coral. Ricky waves right up to the surface, doing a backflip onto the crowd of men, and Emilio is propelled through the air, caught effortlessly by the others. They end by diving off the edge of the stage into the sea. Stunning.

Pharside and Pheonix close out the duets with a witch doctor/voodoo doll routine for Ricky and Valerie, respectively: He recalls The Shadow Man from The Princess and the Frog, she evokes Sally from The Nightmare Before Christmas with her black seams and red upturned mouth. This Creole Coppélia features great choreography that the dancers make their own. Valerie grows by leaps and bounds, week after week, clearly soaking up everything she can from Ricky, who remains brilliant.

We also see another of the season’s winning dance crews. Academy of Villains comes back to perform another demonic but really cool routine. Very inventive, with lots of hip choreography and wicked use of props.

Peppered throughout the evening, the six endangered dancers perform solos, though they only do so much to help their case. Teddy and Casey both give amazing solos, as does Emily. Serge and Carly’s solos fall a little flat, as he succumbs to the difficulty of a ballroom guy dancing without a partner and she loses her energy to the odd cut of the song, which sounds like it ends prematurely. Jessica’s solo is fine, though she resorts back to the sex kitten bit. But her duet with Casey, and Travis’s choreography, cements their positions in the Top 10. The others, including the lovely Teddy, are all let go.

What do you think, city kids? Are you as sad as we are that Teddy went home? What about the others? Would you have made any changes to the Top 10? Are you looking forward to the returning All-Stars next week? Cast your votes below.