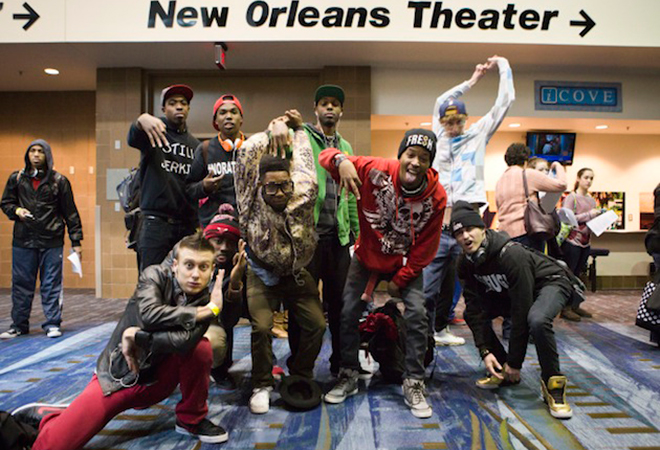 Woohoo, City Kids! Our favorite (summertime) dance show is back—and with shiny new graphics. This show has the best dancing on television, and it looks to be an exciting season featuring more incredible “athletes of dance,” as host Cat Deeley calls them.

We start in New Orleans with resident judges Mary Murphy and Nigel Lythgoe joined by guest judge Wayne Brady. He’s so entertaining and he has some of his own fun with the contestants. The judges have been playing with the contestants more these past couple seasons. Auditioning is difficult business, so it’s wonderful if they can make the dancers feel more comfortable.

Day one in the Big Easy starts strong with excellent soloists who go straight through to Vega—I mean Los Angeles. This year the callbacks are in Pasadena, but we’re so used to saying Vegas since that’s where they’ve been for the past 10 seasons.

18-year-old contemporary dancer Shelby Rase and 19-year old ballroom dancer Tanisha Belnap both go straight through to callbacks. Shelby, who looks and sounds a bit like Laura San Giacomo, starts her solo with a beautiful developé that shows tremendous control and balance, but the remainder feels repetitive, with similar tricks using the same leg. Her father turns up the heat a bit, showing off the bottle dance he started doing in college—natch. It’s a bit disconcerting.

Tanisha’s routine is daring and sexy, and that’s just her walk upstage. She’s got quite a wiggle. She has a good amount of content in her ballroom solo, which is difficult to do. As Mary mentions, it’s clear she’s got modern dance technique to flesh out her solo. Very smart.

Megan Marcano also earns a ticket to the callbacks after her lovely contemporary routine. The 22-year old beauty, who has been caring for herself since she was 12, really impressed the judges with her coquettish, individual style and effortless technique.

Some familiar faces return to the auditions, including New Orleans bouncer Shelby “Skip” Skipper, this time with his brother Shane. They impress the judges with their individual dance style, but the judges ultimately feel Shane has more to learn. They send Skip through to the callbacks while younger brother Shane goes home.

Novien Yarber also returns, as does Caleb Brauner, who both auditioned in Memphis last year. They each get teary in front of the judges but for very different reasons. Novien loves to dance so much that he’s overcome with emotion, perhaps letting his self-confidence, or lack thereof, get the better of him though he puts on a stellar audition and goes straight through to callbacks.

When Caleb (who I keep wanting to call Teddy) auditioned last year, Nigel brought his surprisingly impressive father up on stage to dance with him. This year, Caleb reveals that his father passed away very suddenly during the year, but not before he had convinced Caleb to follow his dream. He’s there to fight for it and boy does he. When he doesn’t make it past the choreography round in New Orleans, Caleb shows up again in Chicago, with a different routine, one that’s made even more poignant by his quirky style, as guest judge Jenna Elfman points out. This time, despite a little difficulty with the choreography round again, he makes it through to Los Angeles.

Hold on, though. Before talking about Chicago, we cannot forget Trevor Bryce, whom Nigel praised as putting on “one of the greatest solo performances I’ve seen on So You Think You Can Dance.” That’s high praise but Trevor deserves it. His odd, quirky, impressive routine to the various melodious noises a PC makes is strong and very unique, showing tons of personality as well as technique. As Wayne mentions, you’ve got to have that foundation before you can mess around with it. We suspect Trevor will be around for a while.

New Orleans also saw a few other characters, like large and in-charge aerobics instructor Jacoby Jimmerson, the “Big Black Swan” who cut a rug with Wayne Brady, and Wendy Williams-impersonator Courtney Barnes. Both dancers had some impressive moves, but neither were strong enough on technique to make it to the next round. I was curious to see how Courtney would handle choreography, but the judges weren’t. There’s also a dancer with some kind of rope routine who apparently made it to, and past, choreography, but they didn’t show his routine. Wonder what that’s about.

The first city ends strongly with a ballroom couple, Marquet Hill and Brooklyn Fullmer. While their performance seems too flailing the judges love them and send them through to callbacks. We’re over that song, Blurred Lines. Yes, it’s a catchy tune that’s great to dance to, but it’s also offensive and totally overplayed—even before the three times we heard it in this episode.

We’re finally on to the second city, Chicago—now christened Chi-beria because of the frigid temperatures during the audition days. But the dancers keep it hot inside especially best friends Nick Garcia and Rudy Abreu. What an interesting dynamic they have: close friends who also compete for the ladies. They make an entertaining duo but they’re strong individual dancers with unique talents. Nick’s ballroom solo was super sexy solo while Rudy’s warrior contemporary routine took no prisoners. Both very exciting.

The strippers—er, jit and hip roll dancers from last season in Detroit return again, and Mary insists that they give Jenna Elfman a private dance. Looks like much of it is too hot for network television but perhaps it’s just as well. The four make it through to choreography but not past that point.

We have to wait till next week for day two in Chicago, but in the meantime we have homework: Justin Beiber and his choreographer Nick DeMoura announce a new component to this year’s competition. They introduce us to two new dance crews in each audition episode, and we, the audience, can tweet which crew we’d like to see on the show. Our choices today are the popping/robotics team Poreotics or the all-women tap crew Syncopated Ladies under Chloe Arnold. You may remember from last season that we love tap, and Chloe and her sister Maud do amazing work. We were rooting for the tap crew even before we realized Chloe was involved.

What about you, City Kids? Which crew did you vote for? How’s the competition shaping up so far? Who is your favorite dancer tonight? Any early predictions for the Top 20?