Home Uncategorized “So You Think You Can Dance” Season 10, Episode 9 Recap: All... 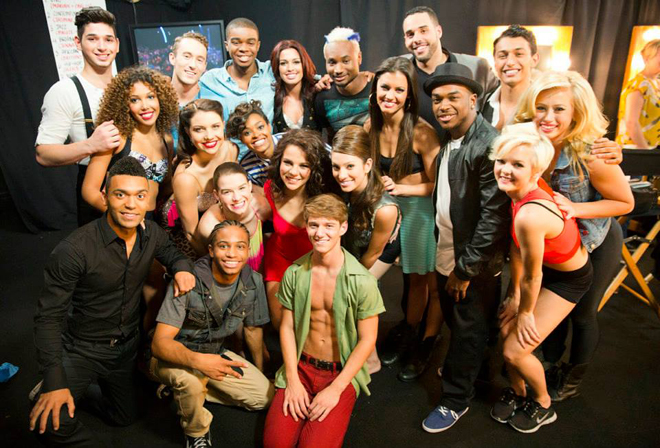 What an odd night, City Kids. Everything about it seemed awkward, and not in a good way. SYTYCD’s first season 10 elimination was the worst offender—not because of who was eliminated but how.

Before the eliminations, the evening started with a group routine. From the quirky outfits to the thigh slaps to the stilted shakes, it had Sonya Tayeh written all over it but was actually choreographed by Tyce Diorio. The dancers played dolls coming to life (like Christopher Scott two weeks ago) in a strange nightmare. Interesting to see, but it’s going to be difficult for anyone to come close to last week’s stellar NappyTabs opening number in which the dancers ran through the halls of the SYTYCD studios.

After Cat Deeley rushed through introducing the “jidges”—Nigel Lythgoe, Mary Murphy, and guest judge Christina Applegate—she quickly introduced the dancers. Boy did the audience go crazy when Paul and Makenzie danced their eight counts. Paul is likely the one with the screaming, shrieking fan base in the audience. If that keeps up, he’ll be around for a while.

Cat then reviewed what happened last week and revealed the six dancers who were in jeopardy: Brittany, Alan, Makenzie, Jade, and partners Mariah and Carlos. In a format change from last season, they revealed these dancers at the top of the show, saving Makenzie and Alan immediately and forcing the others to dance for their lives before eliminating two of them. Mariah, who was first, had to dance without even the benefit of a commercial break to get over her shock, which clearly showed on her face. The judges were underwhelmed with the solos and the dancers seemed trapped in the limitations of their own styles (particularly the women). Surprisingly, the judges said goodbye to Carlos and Brittany, allowing Mariah and Jade a chance to grow.

However, the eliminated dancers couldn’t retire after that. In a horrible twist, they had to stay and perform with their rescued partners. Before announcing anyone’s fate, Nigel had asked if they were able to do that and Cat answered for them saying, “They’re dancers.” Yes, they are professionals, but it is cruel and unusual punishment for the producers to pull a stunt like that. We hope it wasn’t a ploy to make things more dramatic.

Once that unpleasantness was out of the way, it was on to this week’s performances, where things didn’t get any less weird. Curtis and Hayley did the first of too many overly sexy routines; in this case a strange Ray Leeper dominatrix jazz dance in black (p)leather outfits. It seemed gratuitous, but the judges loved it. While Curtis danced maturely and has enormous potential, he has such a young face that it’s sometimes difficult to see him in these kinds of roles. His slow, one-handed cartwheel from the floor was gorgeously controlled. Mary said “Hayley Holy Smokes,” and called Curtis a “giggle bucket” (um, what?), and Christina lost everyone when she told the dancers to “ooze into the words” more. Okay.

The judges love Aaron, but we think he’s extremely lucky to be paired with the incredible Jasmine Haitch (as Cat says it), who’s so sharp and fierce. They performed another way too sexy routine, this time by Tabitha and Napoleon, prompting us to check what rating the TV Parental Guidelines gave the program. Mary asked about this too, in a joking way. It’s rated TV14 DL, which means children under 14 should watch with parental guidance because of suggestive dialogue (D) and crude language (L). Bizarre. We guess they’re referring to sign language (i.e. dance).

More hyper-sexed routines followed: Paul and Makenzie portrayed a mad scientist (we hoped it would be this one) and his Fem-bot (again with the mannequins?) choreographed by Sean Cheesman in some strange modern-day Coppélia. She does have beautiful feet though, and Christina nailed it when she said Paul looked like a young Patrick Dempsey. Jasmine M. played a young innocent to Alan’s creepy tango pirate for their Miriam and Leonardo-choreographed Argentine tango. Some of the lifts were exciting, like that split leap, and the footwork when the music picked up got the blood pumping, but the routine had too many showy lifts and not nearly enough tango. This was also one of a few routines where the music overpowered the dance. Jenna’s character put Tucker’s in his place during their nightclub cha-cha, which also had too much sexy attitude and not enough actual cha-cha. (Nigel took it out on the dancers while it was the fault of Dmitry Chaplin’s choreography). Amy and Fik-Shun played cage-dancing, butt-slapping bellmen (wha??) for NappyTabs’ hip-hop routine. We believe Nigel when he says they may end up in the finale, but we also agree with Cat when she hysterically said, “This is not what I ordered.”

What is with all the butt grabbing and booty slapping tonight? We confess to being affected by recent discussions of rape culture in politics, comedy, and television, but the choreography grew a little one-note with too many gratuitously sexy routines that promoted bad gender stereotypes. Even Jade and Malece’s messy but energetic Bollywood number supposedly portrayed a guy wooing his girl back. It’s getting boring and it’s unnecessary. As we said of the “Meet the Top 20” episode, we love when the show features dance for dance’s sake, and it’s not necessary to have props or gimmicks or poorly thought-out concepts that don’t pan out or help the routine.

Speaking of overly sexy, let’s just take in Cat’s insane outfit for a minute. Yellow patterned skirt aside, the top was a kind of Egyptian-necked, black, Leeloo Dallas Multi-Pass Band-Aid thing that showed entirely too much skin. She can certainly pull it off, so to speak.

The highlights of the evening were the two Stacey Tookey routines, the first featuring gorgeous (“Velvet Underground and”) Nico, in his element, and Alexis, who was done a disservice by the package reminding us that she’s not a contemporary dancer. She danced beautifully, though the music again overpowered the movement. They also win the award for best please-vote-for-us bit, with her heart-shaped fingers and his adorable kissy face. Stacey’s other routine, danced by Carlos and Mariah, was made all the more powerful by Carlos’ early elimination at the start of the show. It’s hard to know how much emotional punch it may have had had they not been in the bottom.

Eliminated Brittany and BluPrint also danced a library-based Broadway routine by Spencer Liff, eliciting an interesting comment from Christina about playing to the back row. Nigel also implored BluPrint to “believe in what you’re selling,” while pretending Brittany’s elimination was not his fault. Odd.

The producers’ decision to eliminate the couple at the start of the evening only to have them perform later set a strange tone for the night, and we suspect they will get plenty of backlash from it. It will be interesting to see if they change it during the season. We also have one more request of the producers: Bring back the slo-mo replays. There have been fewer and fewer these last two episodes, and it’s one of the things that makes this show superior to other dance shows.