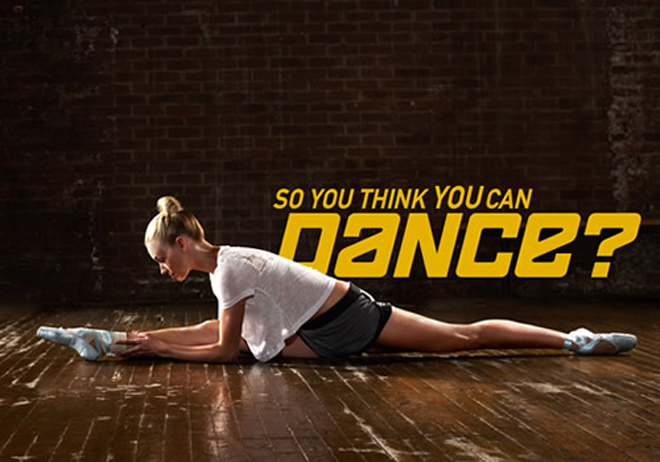 Welcome back, City Kids, to another round of amazing auditions, which seemed to toggle between wacky and sweet. Despite the crazy chicken costumes, dislocated shoulders, and spooky visions, there was still plenty of incredible dancing. Either the not-so-good dancers know to stay away, or the SYTYCD producers have stopped broadcasting the train wrecks.

While some viewers prefer to watch the live-performance shows, we love the auditions. It’s the first time seeing new dancers who have one shot to blow the judges away. Everything is novel and fresh, we have time to learn their “move du jour,” and we see a more intimate and vulnerable side of the dancers.

Last night started in Los Angeles, where Modern Family’s Jesse Tyler Ferguson again joined judges Mary Murphy and Nigel Lythgoe for more whack-tastic performances. It doesn’t get weirder than Nicholas Stewart aka Slick. (“Ick” is more like it.) Slick danced a style called flexing or bone breaking; his disembodied arm flipped inside out as he manipulated his head and tortured his shoulder. It can’t be healthy and it looked disgusting. Just, no. All three judges cringed and Jesse looked ready to crawl under the table.

Last week we only saw glimpses of contemporary dancers; this week featured many, along with some sad stories. At least four contestants shared their heart-breaking situations starting with Alex Kessinger who might have been in foster care had her aunt not raised her. But you wouldn’t know that tale of woe from her sex-kitten audition, full of winks and poses with some flashy tricks thrown in. We found it boring but it impressed the judges who handed her a ticket to Vegas.

Sebastian Serra, on the other hand, had an exciting audition. The powerhouse Orlando Ballet dancer exploded like a shot, with huge jumps and great energy, though it’s difficult to sustain for long.

The producers teased a trio of weirdness, making it seem like awful, horrible stuff would come: a woman in a bright red Firebird ensemble, a mostly naked man doing Native American hoop dancing, and a tall, lanky man dancing on pointe. All three were surprisingly good. The tradition of men doing pointe work goes back decades, and the Chicken Lady danced well, had a pretty face, and was quite a character. Hopefully we’ll see them again.

From Chicken to Duckie: Season 5 contestant Phillip Chbeeb returned to cheer on his best friend and student, Emilio Dasal, nicknamed Millie. Jesse said, “as in Thoroughly Modern,” but no one seemed to get it except Mary. Millie gave an entertaining audition and Mary wasn’t the only one who thought he broke his arm. He successfully navigated the choreography round as well and made it to Vegas. Like his mentor, Millie is one to watch.

Two more young brunettes auditioned with contemporary styles: one finished the day in L.A. and the other opened the Austin, Texas auditions. Both were stunning, with a maturity well beyond their 18 years. Makenzie Dustman, whose parents are “in a vocal jazz group, and they sing” (um… isn’t that what vocal means?), danced to classical music, showing off gorgeous lines and dazzling pictures: those important snapshot moments within a routine. In Austin, Hayley Erbert also gave an attention-grabbing audition, and as promised, she was effortlessly sexy (unlike Alex). Actress Minnie Driver, who filled the guest judge spot in Austin, made sure Nigel knew what’s what, and sent Hayley straight through to Vegas.

It was quite the family show in Austin. Four-year-old Anthony, though too young for the competition, performed with an adorable star quality that will take him far. Donovan Gibbs, 18, whose parents gave up their home so they could keep their dance studio, impressed Mary with his varied vocabulary despite being primarily a b-boy. Lucky for him, his father is probably older than the competition age limit, because Dad could also bust a move. And Hampton Williams, aka The Xcercist, returned, this time with his girlfriend, Darlesha Goggins, and their four-year-old daughter. While his audition wasn’t as impressive as last year’s, they did show unique style and high entertainment.

Much like the Xcercist did last year, Shane Garcia moved Mary to tears. After explaining that his dancing allows him “to speak freely,” unhindered by his stutter, he presented animation and bone breaking that was beautiful, not shocking or hideous. Their pre-commercial tease fooled no one: Shane did great in the choreography round and was bound for Vegas.

The producers did snooker us with Dannon O’Brien, whose primary interest seemed to be crazy pants and weird horror makeup. No talk of dance in his pre-audition package, Dannon helps his parents run a haunted house, and looked like he would be terrifying to watch dance. Instead, he was brilliant: a strong, quirky dancer with great technique, creating horror-inspired images (he snapped his own neck!), and recalling memories of season 5 contestant Kupono Aweau.

And what a shape on Nick Muckleroy, who displayed amazing control while dancing to “We Insist,” by the brilliant experimental cellist Zoë Keating. (If you have a chance to see her live, do it.)

It remains to be seen how they’ll top last night, but next week in Boston might do it. They’ve already shown some poor woman hitting her head on the floor. We’ll have to count to see how many more times they show that.