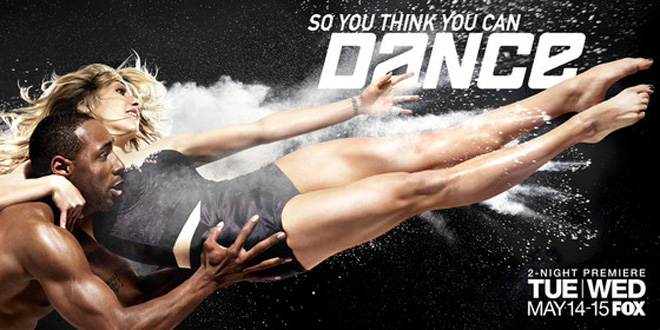 The SYTYCD (or “city kid”) team was in rare spirits last night in Detroit, their second audition city for season 10. Permanent judges Nigel Lythgoe and Mary Murphy and guest judge, season four competitor Twitch, goofed off, got crazy, and brought everyone in on the fun. (Was there something in the water?) Yet there was still time for outstanding, unique dancing.

This show always brings top contemporary dancers like adorable powerhouse Amy Yakima, whose dad also took the stage, and tall drink of water Morgan “Mo” Williams, who has enormous strength and height in his long limbs. But the street dancers stole this episode. Not just hip-hoppin’ b-boys, but a Krumper, a tapper, a group of male exotic dancers(!), and a new style: Detroit Jit.

Will “Sysko” Green demonstrated Jit, a descendent of 1920s lindy hop and jitterbug with an emphasis on fast-moving footwork. And boy, did he move fast. His feet flitted about nonstop, mixing in African American stepping and even tap. He also moved fast with Mary, bringing her on stage for an up-close-and-personal, steamy new dance called “hip roll.” When she returned to the judges’ table, horndog Nigel said, “Sysko, you brought the blood to parts of her body that haven’t been there in years.”

Twenty-one-year-old Jade Zuberi performed animation (a style of popping) with control and musicality. His tight, subtle movements made him look pixelated. He’s fantastic at what he does, but can he do anything else? The judges thought so, and sent him straight through to the Vegas auditions. He may have trouble there, but he probably won’t be the only one.

DeFonte “Prince Charming” Thomas, the standout dancer in the already talented group of male exotic dancers who closed the episode, also impressed the judges. His full body rolls started at his naked shoulders, ran all the way down and back up his legs, through his torso, and out his arms. Wow. The judges sent him to the choreography round, where he worked extremely hard. Despite Nigel trying to fake us out, we knew Charming would make it to Vegas. It will likely be tough for him, but it’ll be exciting to see how far he goes.

We’d also like to see more from the female krumper shown in a montage, but she was overshadowed by more Motor City antics: Her grandmother joined the judges onstage for some Gangnam Style.

Tyrone Cobham, Jr., a hoofer (modern rhythm-style tapper), simply and eloquently summed up why he loves tap: “because it’s just rhythms.” Well, duh—and yet absolutely true. He jammed a lot of fast, complicated rhythms into his routine, but his taps had a scratchy sound that could have been cleaner and more deliberate. And the camera needs to stop cutting to the audience so often. Yes, tap is an auditory style, but we’d still like to see what the dancer is doing.

Goofiness is infectious, and the judges and host Cat Deeley are so encouraging to the contestants and their families. They promote dance, by anyone, no matter who or where you are. We’re looking forward to more wackiness next week, as we return home to L.A. before hitting the road for Texas.