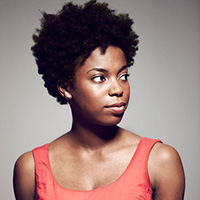 Share
Email
Facebook
Twitter
Pinterest
ReddIt
WHAT: After a barrage of criticism about its lack of diversity, Saturday Night Live this week hired three African-American women. Comedian Sasheer Zamata will join the cast while LaKendra Tookes and Leslie Jones will move into the writers’ room.
VERDICT: It’s about time! Congrats and good luck to all these ladies. On another level, how depressing that in the year 2013 SNL‘s abysmal lack of diversity makes this a rare and noteworthy event. Wouldn’t it be great if the show’s producers decided that white dudes with brown hair weren’t the funniest humans on the planet? What if they routinely employed more people of all colors? In the world of SNL, that still sounds more like sci-fi than comedy.
☞ Here’s a profile of Zamata, and Indianapolis native who reportedly won the role over 11 other players, from our sister mag Indianapolis.