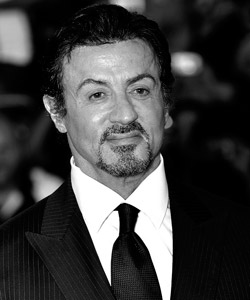 The appeal of the Rocky franchise isn’t in its complexity, but in the resonance of its clichéd messages: You can do it. Believe in yourself. I could go on, but I might find myself in the throws of a Journey song. At Los Angeles Film Festival’s sold-out discussion with critic Elvis Mitchell, Stallone needed little to please a whooping audience. Responding “I love you, too” like an Italian mobster was enough to make the crowd giddy.

The stalwart actor/writer told his fans that the motif of his films is redemption, so when Mitchell proposed that they’re really about a search for family, the actor was blown away. “That’s extremely profound,” he said, a black t-shirt stretched thin over his 63-year-old pecs. “damned if you aren’t right.” “Okay show’s over everybody,” Mitchell joked, rising from his seat. It would have been charming if he hadn’t pulled the same gag the night before with Catherine Keener.

After Stallone delighted the crowd with alternative endings that were considered for some of his films, Mitchell asked why Rambo departs from the ending of David Morrell’s First Blood, the book on which the film is based. At the end of the book, Rambo attempts suicide. “Even worse,” Stallone corrected Mitchell, “a self-induced suicide.” As the audience contemplated this perplexing distinction, Mitchell pressed on about why the movie doesn’t kill Rambo off like Morrell did in the novel. “For all intents and purposes, he’s dead,” explained Stallone, “why does he have to be slaughtered?”

Stallone’s films are his catharsis, vehicles to repair in fantasy what he can’t in reality. The inspiration for the speech that he delivers in the latest sequel was inspired by a strained relationship with one of his real life sons. “It ain’t how hard you hit,” the retired boxer tells his son in the movie, “It’s about how much you can take, and keep moving forward.”

Perhaps the same words got Stallone over some of his career flops, and there were some. Years before he was to be immortalized as Rocky Balboa, casting agent Andrea Eastman rejected Stallone for the part of Pauley Gatto in The Godfather–“she wouldn’t even cast me as an extra at the wedding” he explained. It was through a cheeky smirk that the actor spoke about hiring Eastman to represent him 20 years later.

But after finding fame, Stallone wasn’t immune to failure. Rocky V, which he bitterly regrets not having directed, earned a third of the profit the earlier films raked in. Reflecting, Stallone recalled being ashamed that his kids, who were young at the time, would never know him in his prime. “I couldn’t face my life,” he said. But in 2006, he made a major comeback with Rocky Balboa (you can imagine the canonized score playing as the box office numbers came in). Since then, he says he’s been writing every day. “Sometimes five minutes, sometimes five hours…sometimes I write, ‘Exterior: Building. Night.’ Done.”

When the conversation winded down, the audience saw a sneak peak of The Expendables, Stallone’s upcoming smash-mouth thriller about a band of mercenaries hired to overthrow a South American dictator. Guess who plays the leader.