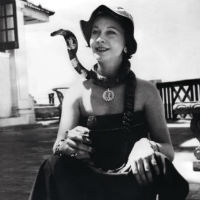 Today would have been the 100th birthday of Vivien Leigh, one of the most vibrant stars of Hollywood’s Golden Age. She embodied two of the most iconic female movies characters of all time, Scarlett O’Hara in Gone With the Wind and Blanche DuBois in A Streetcar Named Desire, but her three-decade acting career also included turns as Lady Macbeth, Juliet, and Ophelia. Leigh was fiercely protective of her personal life, a sense of discretion she shared with her husband Laurence Olivier. Details about her life, especially those surrounding her struggle with bipolar disorder, have remained sparse.

Kendra Bean’s new illustrated biography, Vivien Leigh: An Intimate Portrait, a large coffee table book with more than a hundred pictures, offers a nuanced account of the actress’s tumultuous life. Beginning with Leigh’s birth in Darjeeling, India, where her father was a British officer, Bean traces her Hollywood breakthrough, her affair and marriage to Olivier, her battle with mental illness, and her untimely death at age 53. The book contains interviews with those who knew Leigh, newly unearthed documents from the Laurence Oliver Archives, and hundreds of previously unreleased photos by photographer Angus McBean.