Home Theater “Sleepless in Seattle” Hopes to Sing on Stage 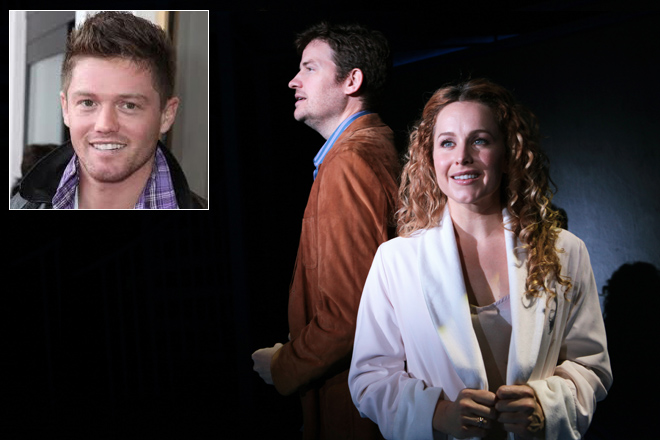 Spencer Liff has been through the process before. The dancer and choreographer who’s known for his work on So You Think You Can Dance and How I Met Your Mother has been involved with four other movie-to-musical adaptations on Broadway. Now he’s choreographing Pasadena Playhouse’s Broadway-bound musical version of the beloved 1993 romantic comedy, Sleepless in Seattle, starring Meg Ryan and Tom Hanks.

The story centers on Sam (Hanks), a lonely widower whose son calls a radio talk show to ask for a new mom, and Annie (Ryan), a journalist who hears the call. “This is a very specific genre: taking a famous movie and trying to capture what people liked about it, without copying it,” Liff says. “I’ve done that now four times and seen what works and doesn’t.”

Liff has also learned a lot from his mentor, Rob Ashford, the Tony and Emmy award-winning choreographer behind Thoroughly Modern Millie and the 81st Annual Academy Awards. Liff worked with Ashford on the Broadway adaptations of Cry Baby and The Wedding Singer, and continues to perform in the Tony Awards presentations Ashford choreographs (including the one on June 9).

Like Ashford, Liff considers himself a storyteller. “I love telling the stories and making that the main focus,” says SYTYCD’s go-to choreographer for Broadway. “It’s not just putting on a bowler hat and doing Fosse hands.”

That reflects the lessons Liff learned at Ashford’s dancing feet. “You cannot do a piece of movement without it meaning something,” Liff says. It’s not always easy to do that in the 90 seconds allotted him on SYTYCD, despite working with contestants who are “capable of doing anything you want.”

In adapting Sleepless in Seattle, Liff has the additional challenge of working with strong singers and actors who are not necessarily strong dancers. The show, which has changed writing and directing teams at least twice since the adaptation was announced in 2009, was not initially going to feature dance. The film doesn’t have much of an ensemble, but Liff believes ensembles represent the voice of the show. He explains that Sleepless, the musical, “could’ve been about any one of these people, and we choose to focus in on the lives of [Sam and Annie],” played here by Tim Martin Gleason and Chandra Lee Schwartz.

“I was given the cast of people and they are in all shapes and sizes and dance ability backgrounds,” says Liff, who joined the production in March. “We wanted the ensemble to look like that. They weren’t meant to look like six-foot tall, leggy, beautiful chorus people that were cookie cutter and all looked the same. That wouldn’t have served the rest of the show well.”

Liff faces a tall order for this show: “How can I do something interesting and creative that is physically within the capability of our cast, but looks impressive and serves our story?” He explains the need to give the cast something they can run with. He hopes to do that by “bringing interesting ways to use furniture or props, something that might be a mundane activity and turning that into a dance. I’ve tried to do movement that feels like it’s new and not seen before.”

The trend of turning films into musicals has been around for decades—think of the original 1968 Promises, Promises based on the 1960 film The Apartment—but has become much more prevalent in recent years. As with jukebox musicals like Mamma Mia and Rock of Ages, movie adaptations are safer investments because they are based on successful titles that build on nostalgia.

“They’re very safe to do because it’s a nice title, and people want a title,” Liff explains, “but New York is very harsh on them because they don’t call them original.” It is difficult to know what will be successful on Broadway. Many movie musicals, including the ones Liff danced in, are not considered commercially successful but were popular with fans. “The Wedding Singer was critically mixed and ran for a year, but I’ve never seen better fans,” Liff says. “There were people who saw the show in that year 150 times. They would see it three times a week. People really got into it.”

As to whether Sleepless will make it to Broadway, Liff says, “I’ve stopped speculating because you never know what people like.” He’s hoping that people will connect to the story in a fundamental way despite the unusual romance in which the two characters fall in love but don’t meet until the curtain closes.

“I think this show offers a tremendous amount of heart and hope,” Liff says. “It deals with loss and moving on, second chances and first chances. The love story is really at the heart of it, and it does that so well.” It’s up to audiences to decide whether Liff is right.