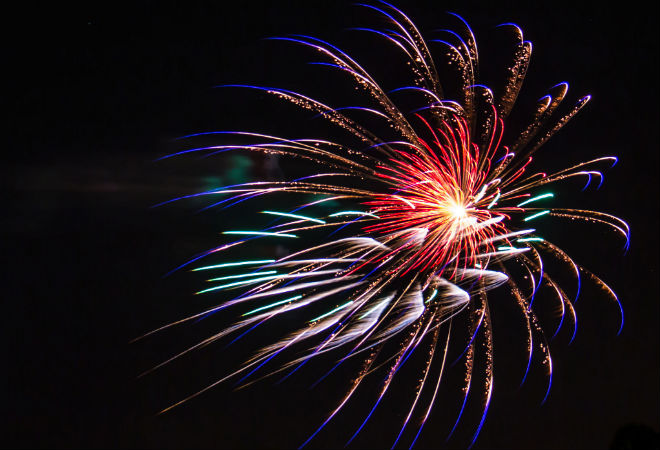 There’s a reason the 4th of July is known as Independence Day, and it’s not one you’ll find in a history book. On this holiday, we’re (hopefully) free from conference calls, deadlines, carpools, and other duties. It’s an opportunity that deserves to be celebrated. If you can’t afford to fly to a private island or buy a red, white, and blue Lamborghini, an ear of barbecued corn and fireworks show should do the trick.

July 4th Fireworks Spectacular
Where: Hollywood Bowl
When: July 2-4, 7:30 p.m.
What: Spend your July 4th with The Jerk Himself, as Steve Martin performs with Steep Canyon Rangers and Edie Brickell. With tickets starting at just $13, it’s no wonder the Bowl’s bash is one of the most popular in town.

All-American Fourth of July
Where: Queen Mary
When: 2 p.m. – 10 p.m.
What: All aboard one of the world’s most historic ships for a family-friendly celebration. Under the elaborate fireworks, enjoy food, dancing, and live performances. If you’re not ready for the night to end at 10 p.m., the ship offers overnight packages.

4th of July Block Party
Where: Grand Park L.A.
When: 4 p.m. – 9 p.m.
What: Think Coachella with fireworks but without the desert heat and costly tickets. See the biggest rooftop fireworks display in downtown and watch performances on two stages from DJs and bands such as Semi Precious Weapons and Phantogram. Bring your blankets and picnic baskets, but leave your wallet at home—it’s free!

July 4th Late Night and BBQ
Where: Aquarium of the Pacific
When: 5 p.m. – 10 p.m.
What: Ever been to the aquarium at night? Explore the many wonders of the sea (and patriotic sky) as you indulge in barbecue. No word on whether Nemo will attend.

Americafest
Where: Rose Bowl
When: 2 p.m. – 9:30 p.m.
What: Celebrate our nation’s birthday at “America’s stadium,” where you’ll see the largest fireworks show in SoCal and motorcycle stunts. Also performing this Independence Day is Beatles tribute band Liverpool Legends. You know, the British Beatles. Oh, the irony. Admission starts at $13 and kids under 5 get in for free.

Pacific Palisades Fourth of July Parade
Where: Sunset Blvd., between Via de la Paz and Drummond
When: 2 p.m.
What: How many people can say they spent their 4th of July with a five-time NBA champion? Join Grand Marshal Steve Kerr at one of the country’s largest Independence Day parades. Finish the evening with a concert and fireworks show at Palisades Charter High School’s Stadium by the Sea.

L.A. Galaxy vs Portland Timbers
Where:StubHub Center
When: 8 p.m.
What: Angelenos who aren’t exhausted by the World Cup can support their home team as bursts of light illuminate the sky. Soccer never seemed so patriotic. Tickets start at $20.

Red, White & Rock N’ Roll
Where:Starlight Bowl
When: 6:30 p.m.
What: You might as well rename Independence Day to Flashback Friday at this concert headlined by the Surfaris and the Tokens (of “The Lion Sleeps Tonight” fame). Surfin, a Beach Boys Tribute band, will also entertain throughout the night, which will be emceed by Brian “Mr. Rock N’ Roll” Beirne of KEARTH 101.

Disney’s Celebrate America! A Fourth of July Concert in the Sky
Where: Disneyland
When: July 1 – 4, 9:25 p.m.
What: Whether you’re a kid or young at heart, there’s something sentimental about Mickey Mouse-shaped fireworks.

2014 Fourth of July Fireworks Festival
Where:CBS Studio Center
When: 4:30 p.m.
What: According to the event’s theme, this July 4th, “All You Need is Love.” There will also be magic shows, the Television Motion Picture Car Club, Blacksheep Squadron model airplanes, and a kids fun zone. For an additional $20, you can upgrade your $20 general admission ticket and watch the fireworks spectacular from the venue’s rooftop. Oh, and Beatles tribute band Paperback Writer is playing.

4th of July Fireworks Celebration
Where:Burton Chace Park and Fisherman’s Village
When: 9 p.m.
What: What makes fireworks more beautiful? Seeing them reflected in water. Bring your picnic basket and enjoy the view at this 20-minute show.