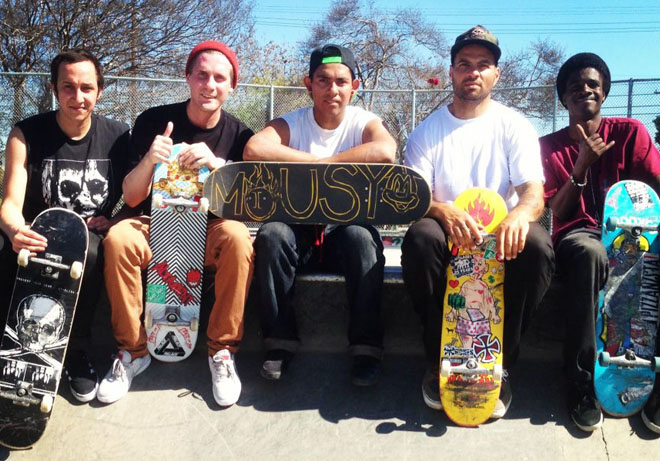 Agah (white shirt, yellow board) with the staff of his current endeavor, DTLA's Pizzanista! (Photographs courtesy of Facebook and Asuka Hisa)

Skateboarding took hold of Salman Agah early. The skating pro, who used to run with Tony Hawk and counts skate legends Steve Berra and Eric Koston as colleagues, remembers falling in love with the shape and presentation of expertly crafted boards as a toddler. After hopping on one of his own at age 5, he was hooked.

Now 40, Agah wants to share that love with kids today in cities so deeply embedded in skater culture. The entrepreneur behind DTLA’s Pizzanista! weighed in as a consultant for the Park Studio program Skaters and Makers this past April at Santa Monica Museum of Art, where his wife, Price Latimer, serves as board president. Eleven students from nearby Olympic and Santa Monica high schools spent their spring breaks building a DIY skate park of sorts, based off the designs of Gil Le Bon Delapointe and under the guidance of architect Francois Perrin and craftsman Dante Cacace.

They cobbled together 22 functional wooden mini-ramps and boxes that can be assembled into one large, compact box. Toward the end of the week-long workshop, Agah brought out a board to test the obstacles, giving his seal of approval before their work goes on display in the museum’s Project Room 1 on May 31.

Compared with Agah’s own trajectory, the 15-to-18-year-olds who participated in Park Studio this year are a bit late to the game (most said they were interested in art but had little experience with skateboarding). Agah, “Sally” to his friends, says he’s more concerned with the life skills they’ll pick up working with their hands and exploring what to do when the surrounding environment restricts their passions. We chatted with him about what skateboarding has done for him so far, and what he’d say to a rookie looking to cruise our tightly regulated streets.

You’re a lifelong skater. Tell me about your earliest experiences, before going pro in the late ‘80s.

I’m from Washington, D.C., and when I was really young, just a toddler, I was with my parents in Ocean City, Maryland, on the boardwalk. We went into a shop that was just full of skateboards. I looked up and I saw ‘em all hanging from the ceiling. I just remember falling in love with the way the boards looked. My parents ended up buying one for me. It wasn’t actually until a couple years later, ‘til I was about 5 or 6, that I really started getting a chance to ride it.

It was just a toy then. I didn’t know there was a skateboarding scene or anything like that. In 1980, I moved with my family to the Bay Area, just south of San Francisco and basically, unbeknownst to me, landed in the hub of what was the birthplace of modern-day skateboarding. In the ‘80s, skateboarding really became popular. I had already been skating and I started as an adolescent discovering that scene – the music and the photography and the art and the skateboarding. I just got immersed in it. I mean, that was all I ever cared about or did. If it wasn’t skateboarding, I didn’t have any interest in it.

Gil’s design for the Skaters and Makers exhibit emphasizes this idea of adaptability — creating your own course and terrain when a proper skate park is out of reach. How have you done that in your own career?

A lot of what is popular is obviously driven by the media and what gets covered. In the ‘70s, skateboarding was being defined by privately owned skateparks. Then due to liability and what not, those skate parks were going away, and people started searching out backyard pools. That type of skating is really hardcore. Once that kind of went away and there were no public parks anymore, a lot of skaters took the streets. That’s when street skating was kind of born, in the early to mid-‘80s.

Street skating, I think, opened a lot of people’s eyes to the possibilities. If you want to skate, and you have a desire, anything’s skateable. Skateboarders have shown that they will use any and all terrain. It could be a staircase, handrails, a vertical wall that meets the sidewalk — skaters skate everything, even natural terrain. I’ve seen articles of people out in the middle of nowhere in Yosemite, or out in like Utah somewhere. They have their boards and they’re out in the middle of nowhere camping, but there’s something that’s skateable and it looks aesthetically pleasing and there you have it.

You’re credited with developing “switch stance” — changing to your non-dominant side on the board. What was it about skating culture that allowed you the freedom to try new things?

Every culture has its life cycle, you know? There was a period of time, I think, where there was a response to how skateboarding was perceived in society. Part of that response was these really kind of wild fashion statements and I think a lot of why I was interested in skating and why I felt like I could skate in the way that I did was because it was something that was not accepted in society.

It was all about making our own rules and living our own lifestyle and defining what life was for ourselves. It was purely a form of self-expression. There was no judge, there was no arbiter. It’s like art. You just do it and if people recognize it, cool. If not, that’s really not the intent. The intent is to get the most out of life and express yourself the way you want to, regardless of how it’s perceived or received.

For me, I had my limitations physically. I’m kind of a bigger guy and a lot of skateboarding was in pools. It was about like reaching down and grabbing your board, and I had a hard time with a lot of that stuff. I was into doing tricks that you didn’t have to use your hands to touch your board. I was all about using my feet. The guys that I looked up to were innovators — Mark Gonzales and Tommy Guerrero, Ray Barbee. They were all kind of on the cutting edge of street skating at the time. I just wanted to do my own thing. That was my motivation.

And I did know that in order to find a place in skateboarding and make a name for myself, I would have to be unique in some way. I really wanted to be a part of the community and the culture. In order to be a part of something, and be a part of it for a long time, you have to put yourself out there in such a way that you can be accepted as being extraordinary in some way, shape, or form. Otherwise, you know, I’ve seen so many people come and go. It’s like, yeah, they were good skaters — they were probably better than me, most of ‘em. But their names are not remembered. I really wanted to be remembered for something.

So how did this all come together for Park Studio?

Really it was Asuka [Hisa, Santa Monica Museum of Art director of education]. She’s a very creative person and very much about connecting youth and the community through art. We were just happy to participate in it. Obviously with my background and Price’s being part of the board and all that, you know the right people to get it done. But it was really all Asuka’s idea. I just made myself available.

I worked along from the very beginning as a consultant to connect the museum with people in the skateboarding industry and offer my own personal knowledge and time to help. But Francois skates and Gil skates. I think the team that Asuka recruited to be a part of it all come from a different era and time of skateboarding, but kind of with the same ideology.

What do you think the kids got out of the program while they were drilling away on these structures?

You know, building things and learning skills that have broader life applications can be fun, and can be exciting and also can be a way in which they can connect with their community. When you build something, you’re basically giving of yourself and your ideas and your time, then other people are going to enjoy it in whatever way they can.

What about visitors to the exhibit, who might be totally unfamiliar with the world of skateboarding? What do you hope they’ll take away from it?

Sometimes you can’t expect people to get everything that you hope for out of an exhibit. I just want it to be visually pleasing. I don’t think it needs to be anything more than that. It’s like a flower. It blossoms and it might have a fragrance, you get to enjoy it for a day and then it’s gone. But that was its only purpose for the person that walked by.

What advice would you give someone who maybe comes to the exhibit and decides they want to take up skateboarding?

Get a skateboard and play. It’s just a toy. Enjoy it. Go to your mom-and-pop shop, visit with one of the skaters – they know how to outfit someone who’s just getting started. Get a board, and just have fun with it.