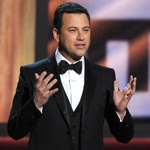 Jimmy Kimmel is on a roll. On January 8 Jimmy Kimmel Live moves from its “sorry, we’re too sleepy to watch” midnight spot (complete with peppy Nightline lead-in) to 11:35 p.m., pitting the talk-show host against Jay Leno and David Letterman. (Conan O’Brien, exiled to TBS and pulling in atrocious ratings, is no legit contender.) Last September Kimmel hosted the Emmys, and this month he gets a star on the Walk of Fame. Can L.A.’s most junior member of the guild of armchair schmoozers usurp the throne? We’re counting on it.

1. Crowdsourcing
You laugh, you cry, you feel a little outrage. The videos of parents pranking their kids as they dole out crummy Christmas presents or announce they’ve eaten all the Halloween candy are priceless.

2. Fighting Shape
The seven dwarves whistled while they worked; Kimmel walks while he writes jokes. With the help of a futuristic treadmill desk, the once roly-poly Kimmel lost 20 pounds. Unlike certain slimmed-down actors (cough, cough: Drew Carey), he didn’t lose any charm.

3. Fountain of Youth
Along with Supreme Court justice and AARP spokesperson, late-night talk-show host is one of the few occupations where 44 is considered relatively young. With Kimmel’s two main rivals in their sixties, he’s a whippersnapper.

4. Family Values
Whether he’s stuffing his foul-mouthed aunt into a motion-capture leotard or packing his seven-year-old nephew into a suitcase, Kimmel enjoys tormenting his relatives. He also hires them for key positions on the show. Blood may be thicker than water, but laughter is more lucrative than both.

5. Necessary Censorship
The recurring bit in which Kimmel bleeps inoffensive words to make them seem smutty is a triumph of selective editing—and a smart critique of the FCC’s capriciousness.

6. Musical Chairs
Since day one music booker Scott Igoe has leaned toward performers who are unafraid to indulge their silly side, from operatic Josh Groban gamely singing Kanye West’s tweets to Eminem teaching Kimmel to rap (with limited success).