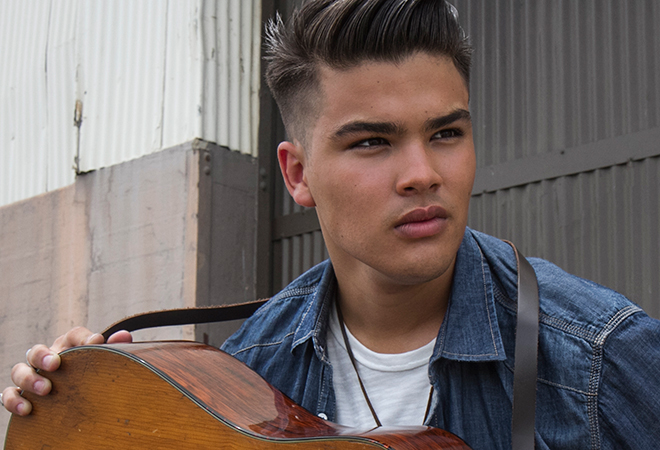 Hearing the passionate, raspy voice of a 1960s Muscle Shoals hitmaker and plaintive lyrics of love and loss, it’s hard to believe that Roméo Testa is only 19 years old. He grew up here in Los Angeles, and his urban-pop songwriting style reflects the music he loves to listen to: equal doses of John Mayer, Schoolboy Q, and classic blues artists.

Testa is hoping 2014 will be a big year. In May, Columbia released his six-song EP, The End, his single “Light it Up” was featured in a recent 7UP ad, and he’s working on a full-length album, Like Children, which he hopes to finish by December. On Monday, June 30 he’ll play a live show with a full band at School Night at Bardot to show off his new material.

Where do you live in L.A.?
I’m in Burbank; I’m a Valley boy. But I grew up in Echo Park and Silver Lake before they were the trendiest places on earth. More than anything, I feel like L.A. has taught me how to be a very accepting human being because you see so many people from so many walks of life. That’s somewhat my parents’ doing, but at the same time I give L.A. a lot of the credit for that.

Where are you recording the album?
I’ve been to London to record with Eg White and Fraser T. Smith who worked on Adele’s record. I’ve been writing out here in L.A., done a couple of sessions in New York, all over the place.  I’m just getting in with as many people as I possibly can.

How did you meet the people you’re recording with?
A lot of it’s through the label. I was 15 when I initially signed a development deal with Columbia. Dan Wilson, who did “Someone Like You” with Adele, is executive producing the album and he’s been a mentor to me. I’ve hooked up with a couple people through him. L.A.’s been a pretty good place to meet people. Music’s such a small world that you end up working with everybody.

What are you listening to these days?
A lot of Sam Smith. He’s probably one of the best artists to come out since Adele. John Newman. I always have my go-tos like John Mayer and all my blues guys: Buddy Guy, Muddy Waters. A lot of hip-hop.

Who would you love to perform with?
I think it’s always going to be John Mayer. Continuum is the holy grail of albums to me. I can probably sing you every single guitar solo on that album. He’s more than just a musician; he’s an incredible writer and lyricist. On top of that he has all of the things going for him that a lot of my idols had, like the Beatles. He and Adele are the modern day versions of those people; they’re up next to be legends.

How did you come up with your album title, Like Children?
The concept of the album has always been about everything that’s happened in my life: my brother dying of cancer, being bullied as a child, my parents not being together. Especially now as I am getting into early adulthood, you find yourself doing things you did as a child but in a much more magnified way. These things come full circle. Like Children just kind of works. It’s how we still do things.