Home Dance There’s Plenty of Nostalgia, Love, and Dancing in For the Record: BAZ 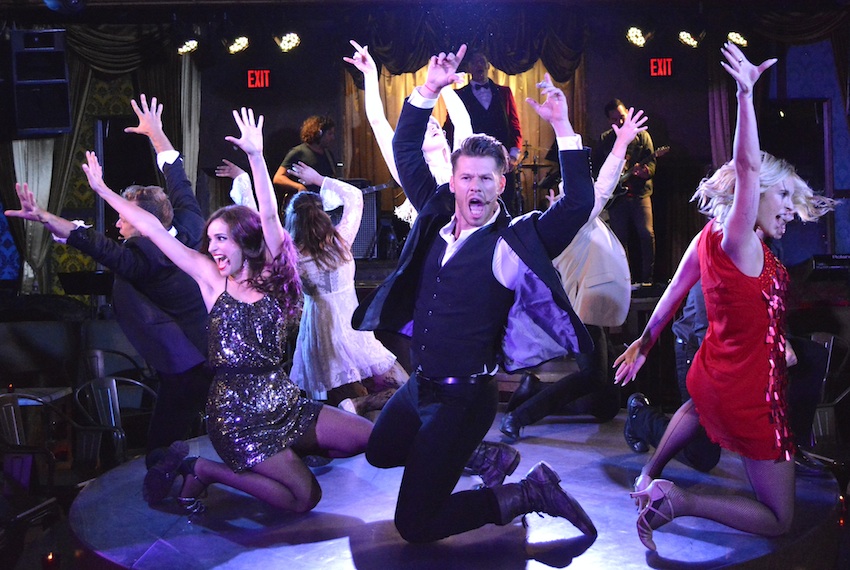 Nowhere is the impact of nostalgia more obvious than on Broadway, where it seems like the majority of shows are based on movies we’ve already seen (Kinky Boots, Matilda) or songs we’ve already heard (Mamma Mia!, American Idiot). For the Record takes it one step further. The latest show in the series, which mashes up movies and music in a cabaret-style show, is BAZ, an evening dedicated to the films of Baz Luhrmann. Inspired less by plots and dialogue, the show recreates scenes we know in a situation that invites the audience to become part of the show.

For the Record: BAZ draws from Luhrmann’s four biggest movies: Moulin Rouge!, Romeo + Juliet, Strictly Ballroom, and The Great Gatsby. Staged in DBA, a three-tiered West Hollywood nightclub that still manages to feel intimate, the show lets performers wander among the audience, dance on the bar, and stand on the piano where co-creator and musical director Christopher Lloyd Bratten plays and conducts. You’re literally in the middle of the action, singing along with songs you love and watching characters recite favorite lines.

Jumping between the films, which take place in a variety of cities and eras—Paris in the 1890s, Long Island in the 1920s, Australia in the 1990s—can be a bit confusing, but the thread that ties all four stories together is love. In three of these films, the man longs for the woman but she feels trapped, kept apart from her true love. (The odd one out, Strictly Ballroom, is also the only one with a happy ending.) It’s a pleasure to remember these classic love stories in a current movie climate so devoid of romance.

The cast rotates but a typical lineup might include Rumer Willis (daughter of Bruce), Barrett Foa (NCIS: LA), Janel Parrish (Pretty Little Liars and now Dancing with the Stars), and Lindsay Pearce (The Glee Project), who has a spectacular voice. It’s well acted, with some hysterically funny moments (especially from James Byous as The Duke) and tragic moments that are believable and moving. The simple costumes are gorgeous, and the singing is wonderful, despite a few sound production problems.

The dancing is executed well, though it’s less important here than it is in Luhrmann’s films. Luhrmann worked with choreographers and performers who had internalized different styles after years of study, be it the “strictly” ballroom samba and rumba, the flamenco and escuela bolera, or the Argentine tango and cancan. In BAZ, the performers are forced to take a few shortcuts because of the limited space, though they certainly work well with what space they have. The “Tango de Roxanne,” for example, is reduced to a violent throwing of the woman between her two male partners, with little to no actual tango involved (and with Argentine tango, it is possible to dance in a small space). And the classic scene from Strictly Ballroom where Fran’s father reprimands her and her partner for their lackluster paso doble lacked oomph because dad’s version of flamenco didn’t look so hot. These are minor quibbles and probably matter to hardcore dance fans in a way that they don’t to most theatergoers. They certainly didn’t detract from For The Record, which brings the nostalgia and romance of Baz Luhrmann’s films back to life.

Created by Shane Scheel, Christopher Lloyd Bratten, and Anderson Davis, For the Record: BAZ is playing at DBA on Santa Monica Blvd Friday, Saturday, and Sunday nights through November 23. Tickets available at DBAHollywood.com.