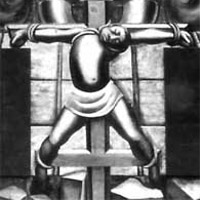 Mexican muralist David Alfaro Siqueiros was never one to shy away from controversy: a Stalinist, a member of the Mexican Communist Party, and a participant in an unsuccessful attempt to assassinate Leon Trotsky, Siqueiros—along with his art—was a product of the political upheaval caused by the Mexican Revolution. It should come as no surprise that his murals are an extension of his socialist ideals, each of them a graceful amalgamation of diplomacy and artistic expression that comment on the sociopolitical constructs of Mexican society.

America Tropical, the most celebrated of three murals completed in 1932 during Siqueiros’ six-month stay in Los Angeles, depicts an indigenous man tethered to a double cross on which an American eagle is perched. In the upper right hand corner of the piece, Siqueiros (never one to cloak his convictions) painted an armed Peruvian peasant and a Mexican farmer ready to defend themselves against the mural’s intrinsic antagonist: American imperialism.

The mural, which adorned an exterior wall of the Italian Hall on Olivera Street, was met with immediate criticism after its dedication on October 9, 1932. Within six months, the piece had been completely covered in whitewash. It wasn’t until the 1960s, when the white carapace began to peel, that Siqueiros’ hidden masterpiece reemerged. It is the only Siqueiros mural in the United States that remains visible to the public and in its original space.

America Tropical has undergone a massive renovation courtesy of a $9.95 million public-private partnership between the City of Los Angeles and the Getty Conservation Institute. After nearly 30 years of planning and delays, the refurbished work of art will be unveiled tomorrow, 80 years – to the day – after its shocking debut.

“This project tells the story of Siqueiros’ incredible artistic talent and his unwavering commitment to people, of censorship during a period of great political upheaval, and of its preservation and enduring presence,” says Los Angeles mayor Antonio Villaraigosa. “I’m proud that the City and the Getty Conservation Institute have come together to make this important investment in public art.”