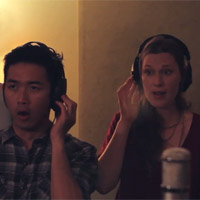 The Silver Lake Chorus is a two-year-old, approximately 25-person choral ensemble based in… well, you can propbably guess which neighborhood. Bon Iver is the musical alter-ego of Justin Vernon, the kind of guy who spends three months holed up in a remote Wisconsin cabin recording his eerie, angelic tunes. Together, they fight crime. Ok, not really. They do, however, collaborate on music.

The acclaimed singer and songwriter composed “From The Snow Tipped Hills” specifically for the Silver Lake Chorus. The song is trademark Vernon: celestial and shivery, fragile yet robust. The way SLC brings it to life in their just debuted video makes it clear this was a fruitful marriage, and there are more collaborations to come.

The chorus is currently working on their debut album produced by Australian singer Ben Lee and featuring original tracks written by Sia, Of Montreal, Aimee Mann, the Bird and the Bee, Tegan and Sara, and the New Pornographers. They hope to release it some time in 2013. If that’s too long a wait, you can catch the Silver Lake Chorus at the Satellite on Sep. 15.

The Silver Lake Chorus – From The Snow Tipped Hills written by Justin Vernon from Geoffrey Franklin on Vimeo.