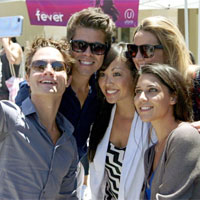 If you thought the Real Housewives of Beverly Hills were a preening, shallow lot, who could have imagined that a series called Start-Ups: Silicon Valley would lower the bar for intellectual depth even further? The third season of Housewives and the first season of Start-Ups both kick off tonight on Bravo with episodes that offer no major twists. The only surprise is how a bunch of self-proclaimed technology innovators end up looking more vapid than a gaggle of aging trophy wives.

Executive produced by Randi Zuckerberg (Mark’s sister), Start-Ups follows six would-be entrepreneurs trying to strike it rich in a post-Steve Jobs world. Most of them know nothing about Silicon Valley, but they’ve arrived with the same gleam in their eye that one imagines among California gold miners in 1849. The protagonists of Start-Ups are as telegenic as they are hubristic and largely devoid of shame or self-awareness. They’re also white. All of them. In Silicon Valley in 2012. Just how out of touch is Bravo? Hard to know, but the show feels at least a decade behind the curve.

Not one of these go-getters comes off well. Sarah, a “pioneering” “lifecaster” who proves you don’t need to have anything approaching an interesting life before you can broadcast it, is the show’s clear villain. Dwight, possibly the Puck of the series, is the only one who does any coding. Kim, though she’d probably cut out her mother’s heart for better stock options, at least seems smart. David spends most of his onscreen time rattling off the various plastic surgeries and physical procedures he’s had done. His goal in life? For everyone to achieve their dreams — by improving their bodies.

Although there’s a lot of talk by the actors (we assume there’s very little reality in “reality” TV) about how they want to change the world, they rely on the tired, empty jargon of corporate America (“upping your game,” “moving the ball forward”). What’s the result of all this “thinking outside the box”? Apps that amount to electronic self-help journals. The revolution won’t be televised, it will be incentivized.