Home Uncategorized Show Me the Love 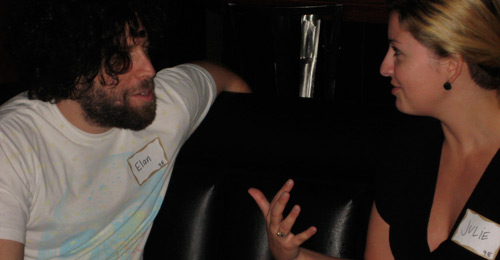 Dating Web sites are as old as the Internet, but lately it seems like every other day I’m hearing about a friend who met a really great guy on Match.com (I always ask if he has a natural desire to protect people and can be seen literally swinging on the site’s ubiquitous TV spots) or got engaged to someone they met on a JDate. No really, I hear online dating success stories more regularly than I receive my mail.

Still, my ears perked up when I heard about The Wing Girls and LawDate.com last week. The Wing Girls, two self-described “ballsy bitches” who go by Jet and Star, run a dating advice Web site for lovelorn men where they post videos on how to tell girls you like them, lists of things not to do on Facebook, and “post coital quotes from hell.”  A few Saturdays ago the girls hosted a speed dating event at Smiles Nightclub in Sherman Oaks, where I’m told about twenty guys and twenty girls asked each other suggested conversation starters for five minutes—or until the Wing Girls yelled “switch bitch!” The speed dating twist? Attendants were asked to bring a friend. Get it?

On Thursday, the Dolce Network launched LawDate.com, a “full-service online dating/social networking site designed with lawyers in mind and the non-lawyers who want to meet them.” I’ve always thought of lawyers as the most socially exclusive professionals—who doesn’t have a friend who developed a minor drinking problem thanks to firm-organized events their first year out of law school?—not to mention particularly easy to find, so the idea of another lawyer-centric club seems a little, er, inessential. Still, I guess lawyers and the layman who want to love them deserve a targeted chance at happiness.

The Wing Girls and LawDate are too contrived to be romantic, but at least one has a sense of humor, and they do both propose that there’s someone—and a dating service—for everyone. That’s a nice thought for a Monday. No word yet on if any matches were made at Smiles, and LawDate is too new to have success stories of its own, but I’ll keep you posted. I’m sure I’ll hear.