Home Art Artist Shizu Saldamando Was Ready for a Change When Becoming a Mom... 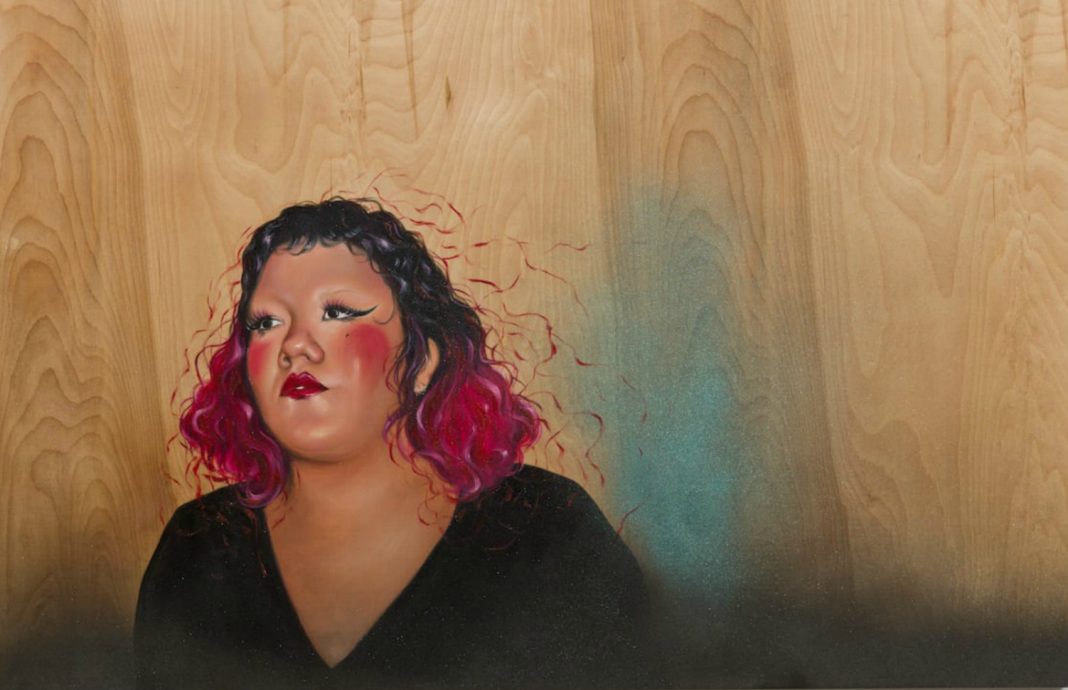 Shizu Saldamando spent the better part of a decade painting the people she parties with. “I think I’m trying to question the notion of exceptionalism within communities of color,” she told LA Weekly in 2017. “You can be a kid that gets drunk on the weekend, and goes to shows and still be human and relatable and deserving of equal rights.”

Lately she’s taken a different tack, more carefully curating her subjects instead of chronicling the punks and club kids who’ve drifted in and out of her life. The change in creative direction coincided with the biggest change of them all: she became a mom. Even if she’d wanted to keep partying till 2 a.m. and photographing subjects to paint, that wasn’t really feasible once her son came along.

“[Having a kid] kind of allowed me to revisit what inspired me about making art in the first place,” Saldamando says over the phone, her son babbling on her lap. “Trying to figure out how to create work not necessarily in such a drunken party context which is what I had been doing, but I guess in more of a structured [way]…to depict other artist, artists who I admire and do amazing work.”

Through the end of March, a mini-survey of the East L.A.-based artist’s paintings are on display at the Hotel Figueroa, where she’s been named its second featured artist, an honor that rotates quarterly; legendary photographer and chronicler of Chicano culture Estevan Oriol was the first. Created between 2009 and 2018, the works are sort of like an abridged history of Saldamando’s previous life. “It was kind of nice to see how the work related to each other after all those years,” she says.

Born and raised in San Francisco, Saldamando moved to L.A. to major in art and minor in Chicano studies at UCLA. While she was a student, she interned at the Getty and later landed a job at Self Help Graphics, then in East L.A., drinking in the city during long bus rides from the Westside to the Eastside. “That was really great,” she recalls. “I got to see L.A. and the changing demographics of every neighborhood as we rolled forward.”

Saldamando built a career around depicting L.A. communities that are underrepresented in fine art—the Latino punk and queer club scenes in particular—but eventually she reached a creative turning point. “I think before I had the child I was sort of at this weird impasse where I felt like I had done most of what I’d sought to accomplish within art making—not on a career level with galleries or sales, but my own art vision of the trajectory of what I wanted to create as a body of work, and I was happy with what I had created so far,” she says. “I was tired of going to art openings and tired of the whole thing and thinking that there has to be something else out there in terms of life in general. I was getting tired of the social aspect, just my situation at that time.”

Shifting her focus to the creatives she admires and becoming more “strategic and particular” about her portraits, has changed her process (not to mention that she has a toddler to keep an eye on during the weekdays when her husband is at work), but the soul of the work has stayed the same.

“I don’t think the aesthetics have changed that much,” she says. “Just the subject matter of who I depict.”

Shizu Saldamando at Hotel Figueroa is on display through the end of March at 939 S. Figueroa St., downtown.

RELATED: 5 Vintage Hotels Where Downtown’s Haunted Past Comes to Life

Inside the New Hotel Figueroa, L.A. Culture Comes to Life Through the Lens of Estevan Oriol

Your Sneak Peek at the Newest Hotels Opening in L.A.