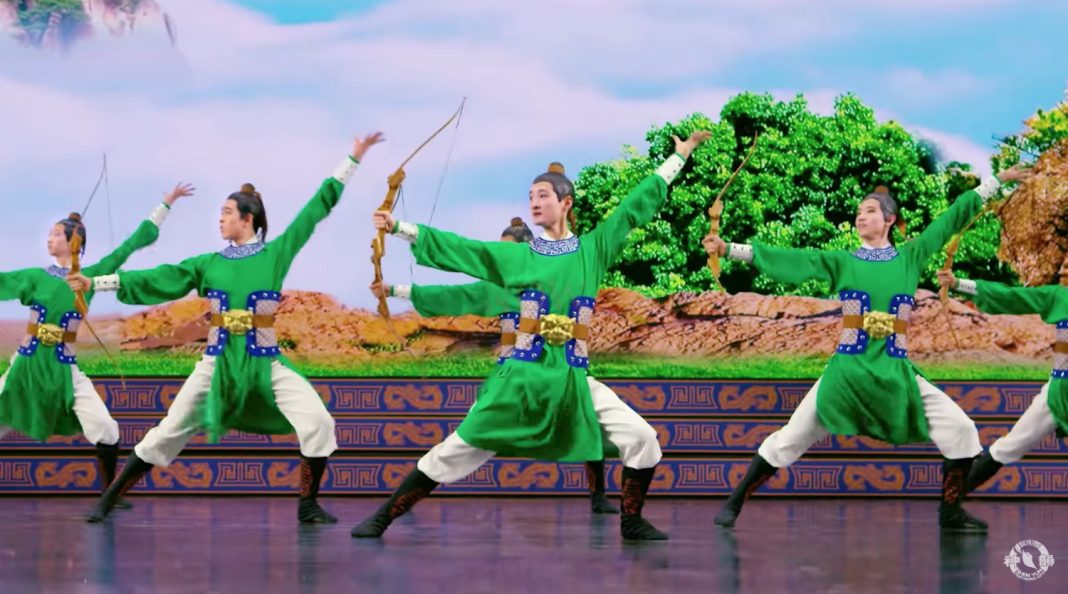 Every 17 years, a biblical swarm of cicadas emerges from underneath North American deciduous trees for four to six weeks of near-deafening mating. Then, nearly as abruptly as the insects arrived, they vanish, returning to their subterranean homes for another 17 years. In a similar fashion, each year, cities and small towns across the world are flooded by a visual cicada storm of marketing, from technicolor billboards to glossy mailers, all heralding the imminent arrival of Shen Yun, a touring dance troupe connected to an exiled Chinese religious group.

The show has traveled everywhere from Bogatá to Broadway, and in each location, its arrival is preceded by a glut of campy advertising touting “5,000 Years of Civilization Reborn.” (The show will be all over Southern California from March through May.) While the sheer volume of Shen Yun’s advertising blitz has even inspired a wave of memes, the group has remained tight-lipped about the details of its marketing budget. Shen Yun did not respond to a request for comment, so we reached out to marketing experts to understand a business model that looks at Roma’s Oscars campaign and says, Hold my beer.

“I think that they’re probably spending more money on advertising than they really should,” says Ira Kalb, professor of clinical marketing at USC. “It’s almost like if there’s a show that’s going to be in the area, you see the ad almost every day on TV, and I don’t watch that much TV.”

Whereas “Procter & Gamble spends 10 percent of their projected sales on promotion”—already a very high amount—he estimates that Shen Yun spends even more.

Another marketing professional, Nicole Finkbeiner, also found the deluge of ads in her own city surprising. The New Orleans resident did some back-of-the-napkin estimates using her experience selling billboard and radio advertisements, assuming full ticket sales and factoring in “event rental hall prices, and costs of travel and such for the dance troupe,” she writes on her blog.

The results: “I couldn’t make the math work where they would turn a profit.”

But unlike Procter & Gamble, Shen Yun is a nonprofit organization. Shen Yun serves as the public emissary of Falun Gong, a spiritual group banned from China by the Chinese Communist Party in 1999. According to the Chinese government, Falun Gong is a subversive “anti-society cult.”

“[I]n addition to their tacky taste and low artistic standards, the performances were filled with cult messages and implied attacks against the Chinese Government,” the Chinese Embassy in Washington wrote in a 2012 statement (and really harsh review).

But according to Falun Gong, they just want to meditate, do Tai Chi in the park, and make the world a better place. In truth, even while the group gives off some cult of personality vibes around its founder, Li Hongzhi, “it’s a diffuse group without strong hierarchies, and there is no evidence of the kind of coercive control that the label suggests,” the Guardian reports.

Shen Yun has nonetheless thrived, despite any misgivings audiences might have over its background. According to public filings, the group generated a revenue of $22.5 million in 2016, the most recent year for which records are available—an increase of more than $2 million from the previous year.

While similar cultural exhibitions like Riverdance commodify culture for the purpose of generating a profit, Shen Yun functions as anti-Communist China propaganda. For this mission, the members of Falun Gong willingly give their money and time to promote the spectacle.

This is the secret to Shen Yun’s marketing strategy. Instead of a centralized team of marketers, Shen Yun relies on a network of volunteers in each city that the show visits who raise the money and buy the ad space publicizing Shen Yun, according to the Guardian. Falun Gong’s founder Li serves as the overseer of these efforts, offering general guidance on messaging and scolding volunteers when they’ve erred. “If you decide to bring Shen Yun, then really ensure that you do it well. And since it is Master who is personally guiding Shen Yun, if your area doesn’t do well it will very quickly get back to me,” he says to his followers in one speech.

For the many theater-goers who are surprised by Shen Yun’s religious and political connections, that’s by design. In that same speech, Li cautioned against emphasizing the relationship between Shen Yun and Falun Gong. “You needn’t insist on telling people that Shen Yun has ties to Falun Gong and make a big fanfare out of it,” he explains.

But there is a third factor to explain Shen Yun’s ubiquity: Us.

“They obviously have a healthy budget, but we probably don’t see the ads as often as we feel like we see them,” says Tim Leake, chief marketing officer of RPA, a prominent L.A.-based ad firm. “They stand out, because we don’t often see such a large media buy around an Asian cultural event.”

Leake notes that Shen Yun has done for its own brand of Chinese culture what Riverdance did for Celtic dancing. “The advertising campaign legitimizes the dance company,” he says, “which might have felt fringe otherwise because of the Falun Gong connection.”

“The power of a brand is that people have heard of it, and therefore feel more comfortable purchasing.”

RELATED: The L.A. Meme Community Speaks Out Against FuckJerry

10 Ways to Have a Blast in L.A. This Weekend