Home Uncategorized She Walks in Poetry: Caroline Kennedy at ALOUD 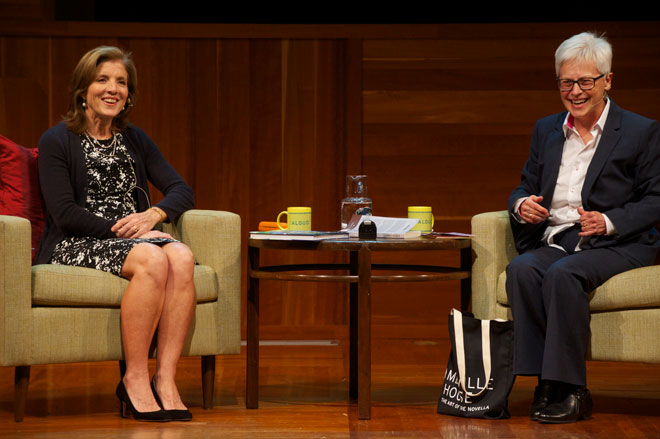 Whoever claims that poetry is dead (or dying or doomed to extinction) has never witnessed the power of celebrity for an underappreciated art form. Last night, the Library Foundation of Los Angeles’ ALOUD series welcomed an overflowing crowd to hear lawyer and author (and political royalty) Caroline Kennedy speak with L.A. poet laureate Eloise Klein Healy about her collection for children, Poems to Learn by Heart.

On her mother’s love of poetry
“Her love of literature and ideas and words was something that was part of her. It was really integrated into our family life. She grew up in a time when people had to memorize Bible verses and Shakespeare sonnets in school. She used to go on Wednesday afternoon and have tea with her grandfather and they read poems together. It was something that was important to her in terms of passing that on… The media just focused on her style and her sunglasses, and it really wasn’t what made her the person that she was. That was something she shared with my father. For both of them, it really set them on their life’s path.”

On information overload
“Poetry really has an ability to allow us to distinguish the authentic voice and authentic information. With so much information coming at kids, that’s one of the reasons it is so powerful, because it does cut through all that kind of sound bytes and allow emotion and truth to escape. That’s one of the reasons I’ve kept going with these anthologies, to expose kids to words and language in these ways.”

On poetry and politics
Healy noted, “With the exception of Lyndon Johnson, every Democrat since JFK—and no Republican—has had an inaugural poet. Can you speculate on why that would be so?”

Kennedy deadpanned, “Maybe there aren’t any Republican poets.” Over laughs, she continued: “Poetry is about freedom of thought, freedom to dissent, and following your conscience. Perhaps some people don’t want someone to get up at the inauguration and say what they really think.”

On a recent LA Times editorial criticizing her possible nomination as American ambassador to Japan
“Well, I don’t really have anything to say about it at all, so we’ll just have to wait and see what happens.” (You can read the original Times editorial as well as the irked letters it prompted.)

Asked to read aloud one of her favorite poems, Kennedy chose Auden’s “Leap Before You Look,” which begins:

The sense of danger must not disappear:
The way is certainly both short and steep,
However gradual it looks from here;
Look if you like, but you will have to leap.

You can read the full text of Auden’s poem here and listen to a complete podcast of the event here.