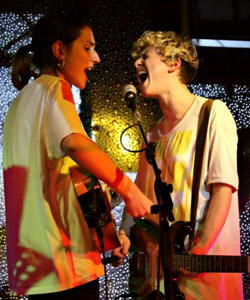 It was a perfectly mild Los Angeles evening up in the hills at the sprawling Getty Center, where British band Micachu and the Shapes put on an awesome show for a full house last weekend. The concert was the last in this year’s free “Saturday Nights at the Getty” performance series. The comfortably modern Harold M. Williams auditorium housed an intellectual crowd, and on stage was the most modern aspect of the scene: the band.

In a word, they’re experimental. Mica Levi, aka Micachu, and her band, the Shapes—Marc Pell on drums and Raisa Khan on keyboards (wearing T-Shirts silkscreened with a triangle and circles, respectively) are young and sweet, even when Micachu, who wore a wrinkled white T-shirt, Dr. Martens boots and unkempt hair, has a tendency to snarl while singing, performing somewhere in between Elvis’ famous lip curl and Pete Doherty’s British bad boy rocker standoffishness. Micachu is classically trained and alters instruments herself. On Saturday she played a guitar with a small hammer. The band’s songs like “Debris” and “Golden Phone,” which is about the crisis phones that line the Golden Gate Bridge, speak to frustrated youths and older generations alike. Some song rhythms are fun (“Vulture”), and some are quirky (“Eat Your Heart”), and the band’s lyrics are poppy but never silly.

Between songs, Micachu seemed unsure how to receive the quiet crowd, who politely kept their iPhones and BlackBerrys out of sight and sound. She kept everyone’s attention just tuning her guitar. Perhaps the auditorium was too formal a venue for an East London pop band, but I think it worked—they were performance artists at work, appropriately at the Getty.

After about fifty minutes, Micachau announced the band’s last song, but the audience called out for more and got a one-song encore. With Indio’s annual Coachella Festival—and most indie music fans from Los Angeles—raging in the desert, I felt like I was witnessing something very special, something up and coming right at home.

The proof: Micachu and the Shapes’ first album, Jewellery (Rough Trade Records), sold like hotcakes in the lobby after the show.