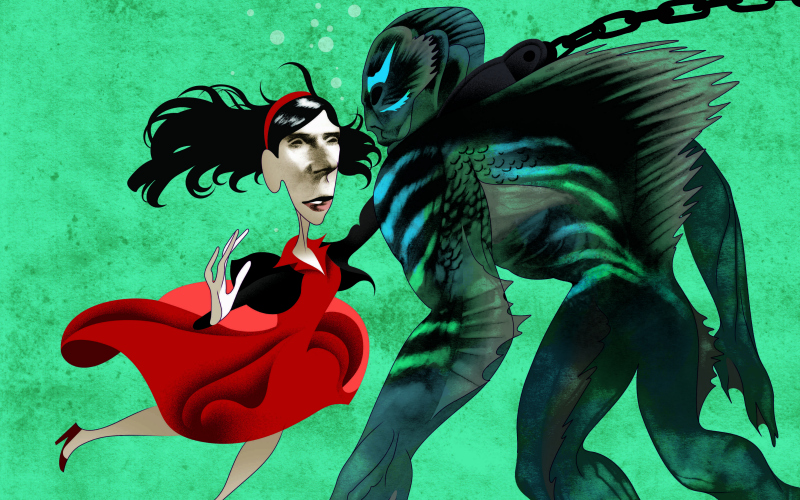 THE LATEST TURN in the art and career of Guillermo del Toro poses the question of what happens when an outlaw fantasist is embraced by the mainstream. Poised even before its recent release to gather critics’ awards and Oscar nominations, The Shape of Water is another of the filmmaker’s beauty and the beast stories, emphasizing the beauty over the beast, when earlier Del Toro films had it the other way around.

Not unlike New Zealander Peter Jackson, who originally wanted him to direct The Hobbit, Del Toro has all along really wanted nothing other than to make King Kong. The Mexican writer-director is part of a cinematic tradition that goes back to Germany’s Murnau and includes, over the course of the century since, France’s Cocteau, Spain’s Erice, America’s Harryhausen. This internationalism attests to the universality of the vein in which Del Toro works: fairy tales for grown-ups in harrowing times.

In The Shape of Water, Elisa, a mute cleaning lady for a top secret U.S. government lab, falls in love with an imprisoned creature, half man and half fish, that does watery pirouettes to Glenn Miller and snatches the hard-boiled eggs Elisa brings him as offerings. When she sets free her strange lover, she releases as well the dreams for which she’s never had words.

Del Toro has been a cult-movie director in the making since he began watching movies as a kid. His biography itself is the stuff of a particularly austere fairy tale: Against a backdrop riven by the various oppressions of state, church, and organized crime—under the tyranny of a sadistic grandmother who taught him to be mortified by his own being—the young Del Toro fled inward, into private fantasies fueled by classic monster pictures like The Bride of Frankenstein and Creature from the Black Lagoon. Once childhood wonder exhausts the fantasies handed down by others, it creates its own. For a quarter of a century and half a lifetime, Del Toro has had offbeat successes both foreign and domestic, like Cronos, The Devil’s Backbone, and Hellboy, and if he’s a kindred spirit of other contemporary filmmakers whose projects are inspired less by life than by other movies (which represent a retreat from life’s boredoms and barbarities), Del Toro’s pictures are more informed by sociopolitical subtexts, such as early 1960s nuclear terror in The Shape of Water. His movie madness reaches critical mass with Water, which is a horror film, spy film, paranoid thriller, poetic fantasy, and erotic romance—and did I mention that every now and then it’s a musical? Back in 2011 when Del Toro started scheming and writing The Shape of Water, did someone tell him he had only a year to live and every movie in his head had to be squeezed into one?

SOONER OR LATER most artists of whatever medium come to accept the lessons of restraint and refinement that aestheticians, be they academics or magazine critics, try to impose as doctrine. Artists come to refine the existing topography of their established maps rather than keep making the maps bigger. Del Toro isn’t your doctrinaire director, however, and sees no reason to make a movie about something when it can be about everything.

Along with this fervor, what establishes him at once among the most exciting and the most subjective of filmmakers is the primal radiance of imagery that appears as if mainlined from our collective subconscious; he seems to have created a whole new vocabulary of color—the eruptive reds of the Hellboy movies, the pitiless blues of Pan’s Labyrinth—and an ever-changing crew of cinematographers and production designers only proves that the look of Del Toro’s movies is Del Toro’s. From the interiors of the laboratory to the exteriors of the rain, The Shape of Water is aquatic green. Even the brown walls have a tinge of moss, and the rare burgundies of cinemas and streetlights, not to mention the scarlets of blood, are warnings.

Del Toro will see your boring rigor and raise you a hundred berserk passions, and if The Shape of Water is a beauty and beast story that’s been told before, it’s done with a gusto that would out-gusto any others, in a grand style that swallows up comparably pitiful styles in its path. Fetishizing his cinematic obsessions, Del Toro renders indistinct any distinctions between madness and method. He is to early 21st-century horror films what Sergio Leone was to 1960s westerns.

That he’s gotten better at adjusting the proportions of elements otherwise at odds with one another is why this may be his moment. In the past Del Toro’s more exalted emotions, having to do with an indisputable empathy and compassion for the powerless, were rooted in a child’s perception of human cruelty at its most ruthless, something from which 2006’s highly praised Pan’s Labyrinth couldn’t recover; rife with torture, mutilation, fatal pregnancies, and the sacrifice of children, it was one of those movies you might see and admire and then choose never to see again. Even Del Toro seemed devastated enough by the psychic shell shock of that post-Spanish Civil War parable (based on a recurrent nightmare he had as a kid) to retreat to the comic-book gigantism of Pacific Rim. But not only is Cold War parable The Shape of Water peopled by the exiles of everyday ’60s American life—the black coworker who becomes Elisa’s interpreter, the aging gay artist whose every small gesture of longing places him at risk, even the foreign agent whose ultimate loyalties defy ideology—but Del Toro also offsets the malevolence of subversive politics with the lyricism of subversive sex. As the lonely Elisa who masturbates in her morning bath until the alarm clock goes off, with the tub of water a daily sanctuary from sadistic bosses and a loveless world constantly reminding her she’s incomplete, Sally Hawkins has found a role into which she can channel and shade the oddball adorability that’s been getting on your nerves since her role in 2008’s Happy-Go-Lucky. She embodies Del Toro’s ambition to at once terrify and turn us on, to make us flinch before we swoon.

Del Toro had the same ambition, if not as sweeping, in his previous picture, Crimson Peak, an often gorgeous haunted-house movie that seemed to throb before our eyes. But he lost his nerve as Crimson Peak lost its way in the third act, prompted by late-hour realizations that haunted-house audiences have traditional haunted-house expectations. For all his reputation as a gothic wild man, Del Toro is a traditionalist, too: haunted houses, clashes of titans, beauties and their beasts, and innocents coming of age by way of befriended monsters in a modern era when men are more monstrous. These are archetypal fables in which even banal emotional encounters are fabulist. Del Toro doesn’t lose his nerve in The Shape of Water. With his cinema of misfits and monsters, the outlaw fantasist embraces the mainstream on his own terms, our harrowing times having caught up with him rather than the other way around.

RELATED: What Percentage of Major Movies Are Filmed in L.A.?