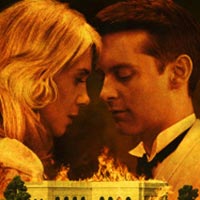 When the nominations for the 2014 Emmys are announced early (way too early) tomorrow morning, look for Breaking Bad, True Detective, House of Cards, Orange is the New Black, and Game of Thrones to rake in a bunch of nods. And the nominations will be well deserved. But what about the just-under-the-radar shows that don’t seem to generate enough heat to earn kudos from the awards show? Just because Emmy voters manage to ignore some of the best shows on television doesn’t mean you have to.

Longmire
Now in its third season, the A&E drama stars Robert Taylor as Walt, a Wyoming sheriff who tracks down criminals while being investigated for murdering his cancer-stricken wife although he may, in fact, have murdered her killer (try to keep up). Lou Diamond Phillips is terrific as Henry Standing Bear, Walt’s best friend. Despite a positive critical reception, a compelling plot, and a sense of place that puts it several notches above the typical cop show, Longmire has never gotten love from the Emmys. This is the year that drought should end.

Key & Peele
Is this Comedy Central sketch show starring former MADtv castmates Keegan-Michael Key and Jordan Peele the funniest thing on television? It just might be. The series, which addresses race, social mores, and screen clichés in hilarious fashion, has won a Peabody Award and was nominated for a Writers Guild Award, but it has been mostly ignored by the Emmys.

Derek
The British series, which airs on Netflix in the United States, finds acerbic comedian Ricky Gervais playing against type. He’s the show’s titular character: dorky, slow, and naive but profoundly kind. Despite criticism that the plots and themes are mawkish, Derek’s genuine innocence makes him and the show surprisingly moving. “I cry every single time I watch an episode,” says our style editor, Linda Immediato.

The Spoils of Babylon
Pretty much everyone—Will Ferrell, Tim Robbins, Tobey Maguire, Kristen Wiig, Val Kilmer, Jessica Alba—turns up in this miniseries that simultaneously spoofs and pays homage to grand dramas of the ’70s and ’80s. (Remember The Thorn Birds?) The six-episode IFC program follows the Morehouse family from the rags-to-riches success of its oil baron patriarch Jonas (Robbins) to the illicit affair between his daughter (Wiig) and adopted son (Maguire).

Hannibal
The interior monologues and turgid pacing can grow wearying, but the visuals never do. This is hands-down the most gorgeous show on a traditional Network television. Filled with expressionistic lighting, a moody, muted color palette, and fluid tracking shots that don’t distract from the story, it’s also the most cinematic. Props to cinematographer James Hawkinson who has shot nearly every episode of the NBC drama.

Clarence
For something completely different, there’s the Cartoon Network series about a boy who wants to try everything because everything is awesome. “It doesn’t have a downer side to it the way a lot of the Adult Swim stuff does,” says associate editor Chris Nichols. Unfortunately, Clarence‘s future is in doubt with the recent announcement that Skyler Page, the creator and voice of the main character, has left the network after allegations he groped a fellow artist.

And… Michiel Huisman
The smoking hot Dutchman, who we first noticed in Treme, has been the go-to guy whenever a TV show needs to up its sexiness quotient. This year he has turned up as a sleazy producer on Nashville, a rugged nomadic dad on Orphan Black (another criminally under-rewarded show despite its devoted cadre of fans), and the second (and much more memorable) Daario Naharis on Game of Thrones. Think of him as the male version of Heather Locklear or a thinking gal’s Matthew McConaughey. Like the Big Mac, he should be contractually obligated to perform at least 40% of his scenes shirtless. We know the Emmys don’t give out a multi-series performance award, but the show should invent a category for that.

For next year…
We’re already putting our money on Last Week Tonight with John Oliver to rake in the noms at next year’s awards show.