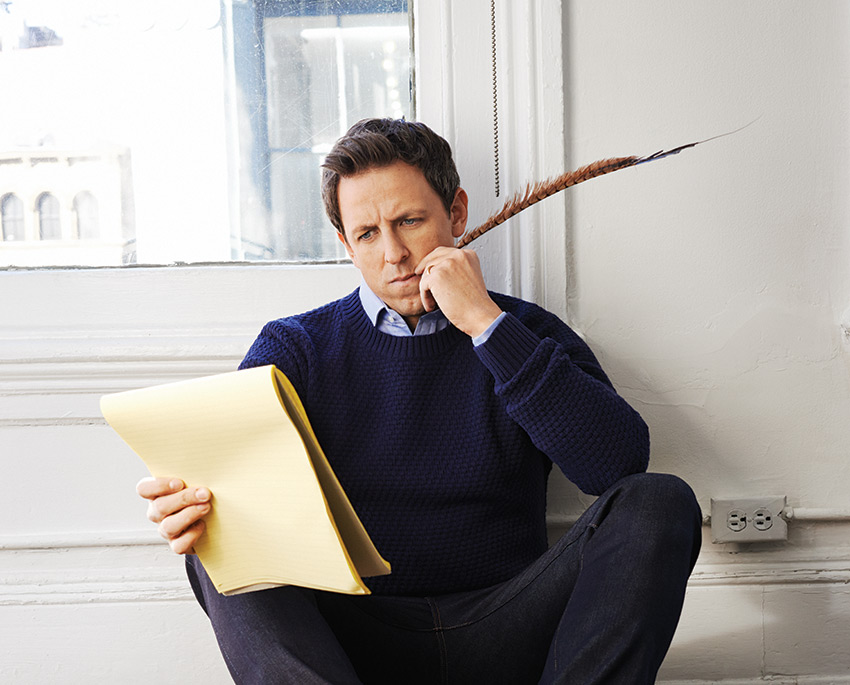 Before Seth Meyers landed a career-launching gig on Saturday Night Live—and way before he inherited the Late Night throne from a long line of talk-show royalty—he did what any comedian on the rise might do: He moved from Chicago to Koreatown in 2000, rented a wreck from a company aptly named Rent-a-Wreck, and gave pilot season a shot. “I auditioned for something with Kelsey Grammer and something else with Jason Alexander,” he says. “I saw James Spader at a Tower Records. For your first year in L.A., that’s plenty.” In 2001, Meyers moved to New York, where a 12-year stint on SNL—8 years of which were spent as an anchor on the popular “Weekend Update” segment— primed him to rule his own broadcast empire. He took over Late Night in 2014 and has been hailed as a nouveau Jon Stewart, using the top half of the show to deliver wry, observant political commentary before pivoting to celebrity interviews. And despite taping on the East Coast, he hasn’t abandoned the West. “The great lie in my life,” he says, “is that everybody who left SNL would stay in New York. The reality is that so many of them moved to L.A., so to see my old friends, I have to get on a plane. But I look forward to it.” Here he talks Donald Trump’s film career and his better half (Bill Hader, not his wife).

L.A. celebrity you’d FaceSwap with your baby?
Seacrest. He seems pretty ageless—he could be anywhere between 25 and 85 years old. I have no idea. He has a baby’s skin.

Pick a hype man: Bill Hader or Bill de Blasio.
You’d be crazy not to pick Bill Hader. But the only thing I’ll say is, Bill Hader would be hard to follow.  Like, I should be hyping Bill Hader. To this day when I do stand-up, near the end of my act, people will scream out, “Where’s Stefon?!” Even though they paid to see me, they’re still holding out hope that Bill will come out. They think that he just travels with me to be my closer.

Because he doesn’t have anything better to do.
No, he doesn’t.

You and Stefon were “married” on SNL. Place in L.A. where you’d renew your vows?
We’d probably Malibu it up. Here’s what I’m thinking: Stefon ran into someone with beachfront property at a club that person shouldn’t have been at. Now, to buy Stefon’s silence, they’re going to let us use that private beach to renew our vows. And I believe Stefon has a list of people like that in almost every city he’s been to.

You love comics. Superhero who should relocate to L.A.?
Batman. It would chill him out and make him a more interesting guy. He needs to admit it’s not going to work out in Gotham—he’s got too much history there. It’s like living in a city where, everywhere you turn, you run into an ex where it ended badly. That’s what Gotham is for Batman now. He needs to get out to L.A., start green juicing. He’s left enough Robins behind to handle Gotham for him.

Superhero you’d dress up as on the Walk of Fame?
If I had to dress up like one, I wouldn’t go right down the middle with an Iron Man or a Superman. I would try to be, like, third tier. So I’d play Blue Beetle, a little known DC superhero. I’m not saying he’s the most interesting, I’m not saying he’s the best, but I think the world needs to be paying more attention to him.

What’s Blue Beetle’s super power?
He doesn’t really have one. He’s like gadgets and grappling hooks.

Maybe that aesthetic would go over well on the Walk of Fame.
Eh—or not. But remember, none of them really do “well,” which is the best you can do out there.

Three Angelenos—dead or alive—who’d be in your dream Late Night writers’ room?
Robert Evans, F. Scott Fitzgerald, and James Ellroy. Ellroy would bring the most colorful language. Fitzgerald would be so depressed that I’d feel better about my life. And when we’re trying to decide on lunch, Evans would know the best place.

Which is false 90 percent of the time.
Correct.

Shake Shack or In-N-Out?
Shake Shack. But I can tell you something: I don’t think  I’ve ever eaten  at In-N-Out. You know what? Fuck it. In-N-Out. I don’t want to stand in line for 45 minutes. I can’t believe people at Shake Shack have that much time for burgers.

Bill Hader Is Killing the Game On Barry

After Trying Literally Everything Else, DC Has Accepted That Women Are Its Only Hope