Home Art Seth Bogart’s New Ceramics Shop Wiggles Is an Installation as Much as... 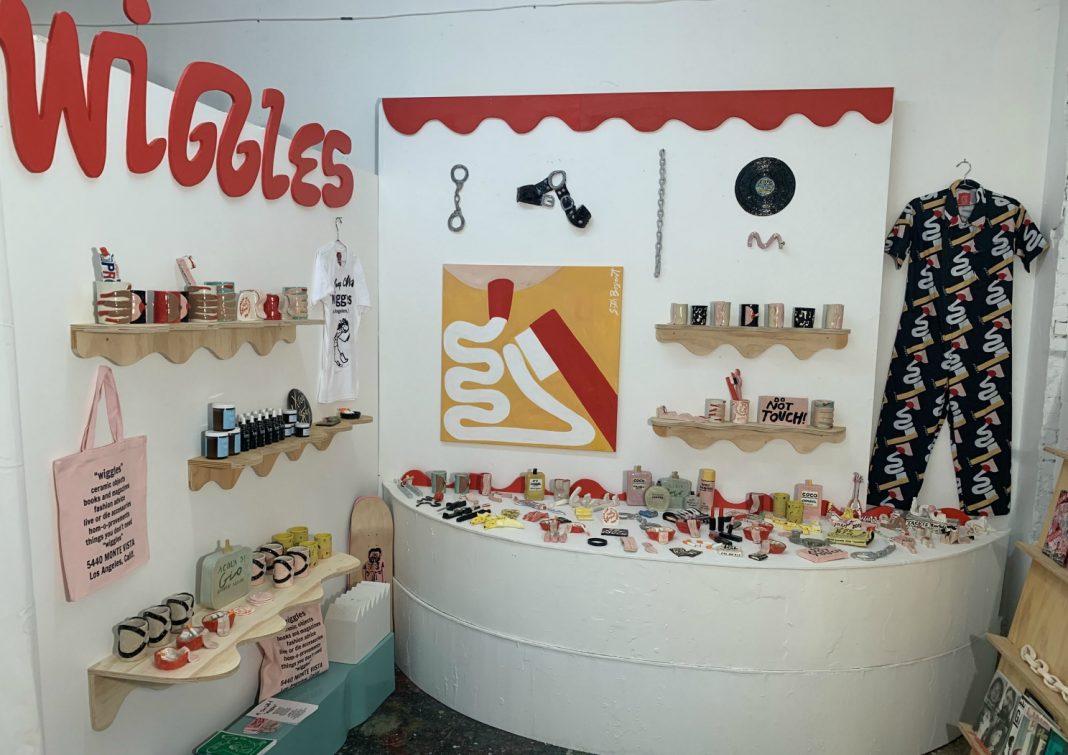 Over the past decade, Tucson-born, L.A.-based musician and visual artist Seth Bogart has done everything from run a salon in Oakland to rock a leopard-print banana hammock as the frontman of cult queercore band Hunx and His Punx. As host of the World of Wonder’s Feelin’ Fruity, he featured guests like Kate Berlant, Manila Luzon, and the Future Ladies of Wrestling in a Pee-wee’s Playhouse-meets-Ru Paul’s Drag Race variety show. And as the fashion designer behind Wacky Wacko, he’s created a growing collection of clothing and accessories featuring his signature campy graphics: jumpsuits with “wiggles” of toothpaste, ceramic cups featuring milk-squirting breasts, and pipes masquerading as Maybelline eyeliner.

Along the way, Bogart has also built up a body of abstract and figurative paintings, and a growing series gay pop ceramic sculptures: crude sendups of bondage gear, matchbooks from iconic gay clubs like the Toolbox and the Big Banana, a ceramic version of the Larry Kramer novel Faggots. That work has earned him solo shows at Chicago’s Soccer Club Club and, in L.A., Nino Mier Gallery and 356 Mission. Meanwhile his performances have garnered spots at the Skirball Center, LACMA, and MOCA.

But his latest project, a ceramics store called Wiggles, is an opportunity to sell and exhibit outside the constraints of the gallery world. “I was kind of sick of working with galleries,” Bogart says. “I just wanted to have my own thing.”

At a soft opening that drew a steady stream of friends and fans last weekend, Bogart debuted Wiggles in the front half of his Highland Park studio. (Going forward it will be open by appointment and every Saturday from noon to 5 p.m.)

“I’m inspired by people like Peter Shire and Bari Ziperstein who have these successful commercial lines and art practices,” Bogart says. “I’m also just into stores, too, as installations.” Despite the detour from traditional exhibition, he has a solo show coming up next year at New York’s Fierman Gallery and is co-curating a group show with Jess Scott at the Tom of Finland Foundation in January.

The display of ceramic objects at Wiggles ranges from Kool cigarettes for $39 to a piece to a Rawhide tissue box holder for $1,000 to a set of five perfume bottles for $2,499. The merchandise echoes his bookstore installation at Nino Mier Gallery, which he filled with gay erotica, sex mags, queer literature, and ephemera all rendered in painted, fired clay. At Soccer Club Club, his 100 Toothbrushes exhibition, featured a Kodachromic cornucopia of fruit and fetish objects sprouting from every imaginable ceramic iteration of the titular dental tool.

“Wiggles is also just going to be a way for me to collaborate with different artists that I like,” Bogart says, pointing to a group of pillows and a collaborative Halloween jewelry collection (with witch finger pipes and eyeball necklaces) from 69 Worldwide. In addition to his clothing line there will be a selection of adult-only reading materials, a curation of art books from Ooga Booga, and a selection of “weird” children’s books—think Niki de Saint Phalle’s AIDS: You Can’t Catch It Holding Hands and the Sesame Street title I’m My Daddy—selected by Emily Ryan. Meanwhile, he’ll do painting shows or collaborations with artist friends like Tini, Misa Chhan, and rising talent Alake Shilling.

As for the shop’s name? “I was making these toothpaste prints and I was calling it Wiggle Wear and I was just thinking I really don’t want to call my store Seth Bogart Ceramics,” Bogart says with a laugh. “Also, I just love wiggle things.” If Saturday’s opening was any indication, so do many other Angelenos.