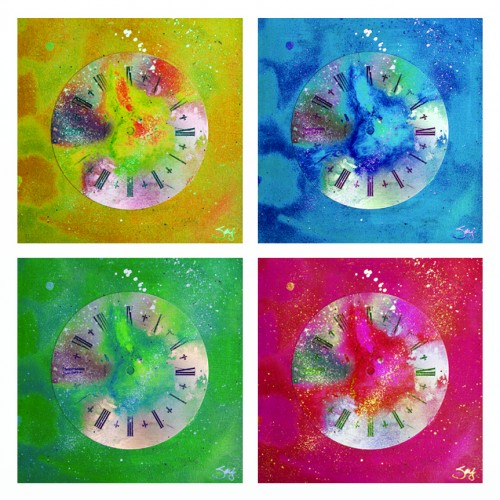 To some, Serj Tankian is the frenetic frontman for hard rock outfit System of a Down, the genre-smashing band that wove insane breakdowns into symphonic interludes and shored up Middle Eastern rhythms with snarling bombasticism. For others, Tankian is a voice for the Armenian diaspora and an outspoken anti-war advocate whose band carried the torch for socially conscious rock in the wake of Rage Against the Machine’s demise. It’s all very late ‘90s.

A decade later, Tankian has embarked on a new endeavor: art. This Friday (November 15) the exhibition Disarming Time: Musical Paintings by Serj Tankian opens at PROJECT Gallery in Hollywood. The exhibition features 22 of the rocker’s original paintings and sculptures, each of which comes with an original audio composition. The aural portion of the experience can only be heard through headphones via a smartphone app that will activate when it scans each work. Along with Invisible Cities, an avant-garde opera where attendees listen to the music through headphones as they wander around Union Station, Tankian’s exhibition seems to mark a trend of personal soundtracks making inroads in public settings. Perhaps it’s a way to drown out the noise of the everyday or an opportunity to experience a private moment in an increasingly social world. Either way, the show is an extension of Tankian’s expansive imagination, which seems to constantly generate intriguing works that transcend discrete categories and are instead linked by his desire to innovate, inspire, and reinvent.