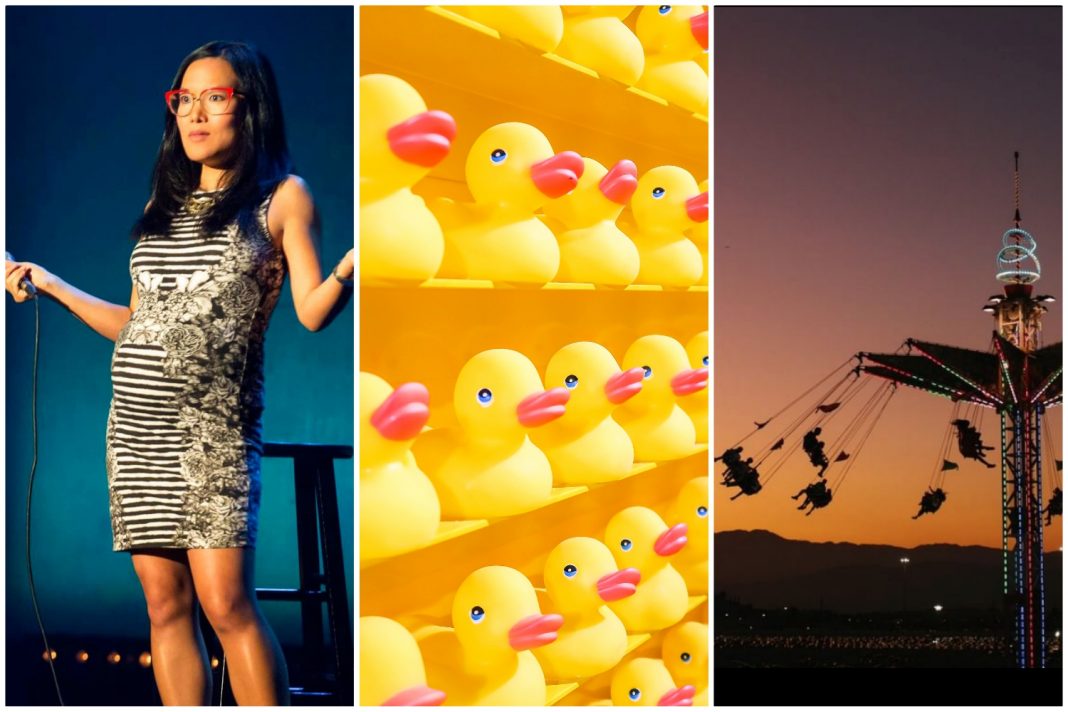 From a ceramics showcase at the Craft Contemporary to standup by comedy queen Ali Wong, here are the best things to do in L.A. in September.

The theme for this year’s run is “POP.” Alongside the usual livestock and greasy food, there will be vibrant pop art installations, an ABBA tribute concert, and an exhibition hall dedicated to technology and pop culture. Pro tip: Angelenos can nab $8 discount tickets for September  1, aka L.A. County Day, if they buy tickets online with the password “LACOUNTY” the night before.

The sequel to the 2017 Stephen King adaptation picks up 27 years after evil clown Pennywise’s last attack. Jessica Chastain, Bill Hader, and James McAvoy play grown-up versions of the kids tormented in the first film. Like that flick, this one is rated R, and early buzz says it’s even more disturbing. Looking for something lighter—with fewer scary clowns? The Downton Abbey movie bows September 20.

Shopping, workshops, and beer are on the menu at the Craft Contemporary’s ceramics showcase. Tickets to the $20 VIP brunch on September 7 give attendees first dibs on the marketplace’s functional wares—plus treats from Porto’s Bakery.

Fresh off the success of Netflix’s Always Be My Maybe, Ali Wong dons her stand-up cap at the Wiltern. Expect jokes about motherhood, gender roles, and, if you’re lucky, the dread that is “fan dick.”

A Play Is a Poem

Ethan Coen premieres five one-acts at the Mark Taper Forum. Each play takes place in a distinctly American locale—the hillbilly valleys of Appalachia, a gazebo in Mississippi, a tiny apartment in New York, an exec suite in Hollywood, and a seedy private eye’s office in L.A.—and features the writer-director’s dark wit.

Your chance to finally dance to a live performance of “September” in September is here. The 50-year-old group of genre-bending titans (above) joins the Hollywood Bowl Orchestra and conductor Thomas Wilkins to close the season with a doubleheader, fireworks included.

L.A. Opera opens its season with Puccini’s seminal tragedy at the Dorothy Chandler Pavilion. Those preferring to milk the nice weather while it lasts can opt for a free alfresco broadcast of the show September 28 at Santa Monica Pier or Torrance’s Columbia Regional Park.

Hit the beach—to pick up trash and quell your “our planet is screwed” anxieties. Last year 13,464 volunteers removed 29.8 tons of litter from more than 70 sites across the county. This year’s efforts run from 9 a.m. to noon; go to healthebay.org/ccd to find a cleanup site near you.

When the emcee yells “Go!” a flock of toy fowl will float down the Pasadena museum’s model of the Arroyo Seco for a chance at a medal. Families wanting in on the fun will have to pay the $14-a-person admission, plus $5 for a race-approved bird from the onsite Busy Bee Learning Store. No souped-up duckies allowed.

Condense your high-culture pursuits into one visit to LACMA, where three big shows open on the same day. “Every Living Thing” celebrates animals in Japanese art; “Betye Saar: Call and Response” examines the assemblage artist’s never-before-shown sketchbooks (above); and “Thomas Joshua Cooper: The World’s Edge” presents photographs of the Atlantic basin.

RELATED: After a Decade, Will Gustavo Dudamel Stay at the L.A. Phil or Leave on a High Note?