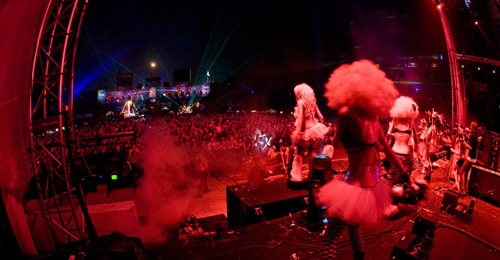 Walking to the Coliseum for the 13th annual Electric Daisy Carnival, I imagined I was marching toward a battlefield. Hundreds—no thousands—of people whose synchronized steps mirrored the slow, loud thud of a bass beat heard from miles away marched alongside police cars and ambulances with sirens blaring and aglow on their way to Exposition Park, the pulsing beat growing louder with each step. We made a motley troop. Most couldn’t decide if we were attending a highlighter party, a lingerie party, or an 80s-themed party and decided to dress for all three (better to be prepared, right?).

Inside the Coliseum, the nearly-100,000 capacity field looked as if it had never heard of a little thing called the USC Trojan football team (though the marching band made a brief appearance in the concessions area, sporting festive neon sunglasses that didn’t quite compliment their usual cardinal and gold). In place of students chanting “fight on,” there were thousands of spandex-clad partygoers wearing more beaded bracelets than clothes and weaving colored glow sticks through the air at an almost-dizzying pace. Even the laser-projected daisies that covered the Coliseum walls pulsed to the beats of acclaimed DJs Benny Bennasi, Paul Van Dyk, and David Guetta.

Outside the Coliseum—dubbed “Kinetic Field” for the night—dozens of musical artists occupied the five other stages scattered across Exposition Park, with just enough distance between each that one’s continuous thumping downbeat didn’t blend with another’s loud high-pitched vocals. Booths with everything from flashing light jewelry to urban street wear lined the walkways outside, and clown-like figures on stilts cast shadows on the crowd with large daisy umbrellas. Thrill-seeking patrons hit the Ferris wheels and a House of Mirrors, among the more nausea-inducing attractions such as the ‘Super Shot’ that catapulted revelers high above their gyrating peers.

Aside from a few mishaps (a strung-out looking guy puking dangerously close to my foot, to name one), the 12-hour festival was a feast for the senses, or a bizarre 4-D episode of Project Runway: a teen in neon American Apparel spandex followed a rainbow-haired man in a floor-length sequined coat who followed a girl clad in lacy lingerie. In my conservative jeans and tank top, I felt at times like an outsider amidst the colorful ravers dangerously crowding the Coliseum field. But when David Guetta’s addictive “Now that the Love is Gone” came blaring through the speakers (accompanied, of course, by pulsating laser beams and flashing lights) I couldn’t help but join in dancing and singing with the technicolor crowd. Maybe I fit in just fine after all, because a wide-eyed girl next to me gave me a crooked smiled and handed me a hot pink beaded bracelet.