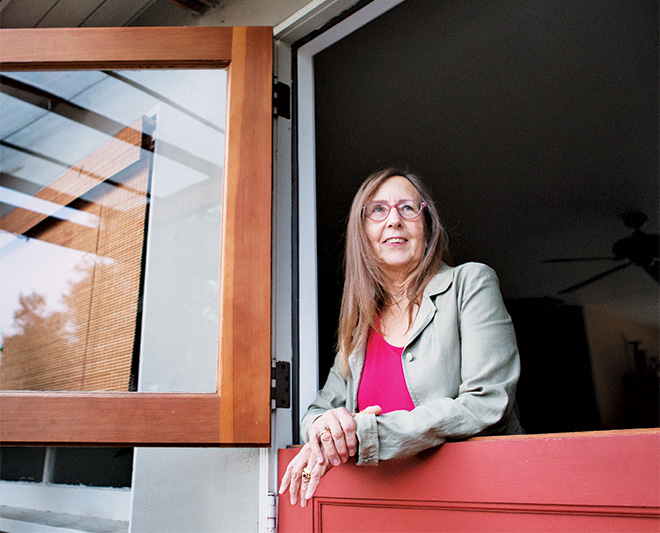 Michelle Huneven writes about California like a native, not rhapsodically but with genuine affection. Her prose exudes such a rumpled, sensuous vibe, it practically gives you bedhead. Off Course—her newest novel, from Farrar, Straus and Giroux—unfolds during the Reagan era, up a “cloud-scarved” highway north of the Tehachapis. Its aimless heroine, Cressida, borrows her parents’ vacation home and another woman’s husband as she navigates the cliffside road to adulthood. Huneven wishes she’d had a book like Off Course at Cressida’s age: “It would’ve been a big help. I got lost in a couple of obsessive relationships in my twenties…It just would’ve been nice to see that other people were in the same position.”

An erstwhile reporter and food writer for L.A. Weekly, Huneven has based all her novels in California, including 2009’s National Book Critics Circle-nominated Blame. Could she ever set a book anywhere but here? “I could,” she says, “but I don’t think I’m particularly interested in it.” Huneven grew up in Altadena, where she and her husband live in a modest, light-filled house with a big squirrel-besieged garden. These days, at 60, Huneven’s digging into a new form: a wild-sounding historical novel set in her backyard, about a notorious family that once owned the land where she lives. Lots of midcareer novelists eventually frack their own terroir for material, but Huneven is aiming high, with an illustrious Victorian antecedent. “Trollope inspired me to think about a series of Altadena novels,” she says. “So we’ll see.”

Everyone needs inspiration. Here’s where Huneven found some of hers while writing Off Course:

Marcel Proust
Swann’s Way
“It gave me nerve to write about misplaced love: Nobody else writes romantic obsession with such focus and compassion.”

John Muir
My First Summer in the Sierra
“Muir’s classic is still the most evocative, closely observed, and entertaining prose written about these California mountains.”