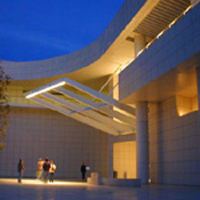 The Getty Villa (in the ‘Bu) has a fantastic new exhibition entitled In Search of Biblical Lands: From Jerusalem to Jordan in 19th-Century Photography. It runs from March 2nd—September 12th, but get there soon for some inspiration and because they are rotating the exhibit in three months to showcase different shots (the photography is pretty delicate). I found myself at a preview the other night being swept away by early, early prints on paper and metal of Bethlehem, Damascus Gate, the River Jordan, the serene face of a Bedouin man or a group of Jewish folk along the Western Wall. Time stops looking at these desolate lands from the view of the earliest photography, and it’s wonderful to be able to look at the people and landscapes through the eyes of the leading photogs of their time—Felica Beato, Louise Vignes, and Frederic Goupil-Fesquet, among others. My fav bit was the stereoscopes that digitally replicate a journey around Jerusalem and Palestine. I flicked through the images more than once. It’s amazing that these moments in time are preserved like a pressed flower from along the River Jordan (from an early trek, its colors still brilliant).

Running concurrently down the hall is Apollo from Pompeii: Investigating an Ancient Bronze. This is a remarkable look at a bronze of Apollo found in 1817-18. It was blown to bits and buried by the eruption of Mount Vesuvius in AD 79, then painstakingly pieced back together by the Museo Archeologico Nazionale in Naples. The statue has been studied at the Getty since 2009 and this is the first time the former resident of the Temple of Apollo in Pomeii has been on display in the U.S. with the results of this study (x-rays, ultra-violet and endoscopic looksees). For more info (there are interesting talks involved with each exhibition) check out dates, times and parking info at www.getty.edu.