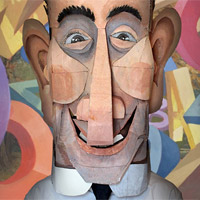 If you’ve consumed a modicum of pop culture in the last three decades, you’ve probably seen the work of Wayne White — whether or not you know it. White’s intense creativity filters through so many mediums, it’s hard to describe all the things he does. To older fans, he’s revered for the puppets he created (and voiced) on the not-just-for-kids kids’ show Pee-wee’s Playhouse. In the art world, he’s best known for his “word paintings,” in which he adds irreverent jokes and phrases to already painted thrift store canvases. A (slightly) younger generation of fans might know him from the figurines and paintings he created for the Smashing Pumpkins’ award-winning “Tonight, Tonight” video (directed by Jonathan Dayton and Valerie Faris). White proves it: Art can be fun.

Born and raised in Tennessee, White lives in Los Feliz with his wife, Mimi Pond (also an artist) and their two children. Over his three-decade career, the zany multi-hyphenate artist has experienced success, rejection, indifference, adoration, and a near breakdown, all of which is chronicled in a terrific documentary, Beauty is Embarrassing. Directed by Neil Berkely, the movie is every bit as clever, playful, and inspiring as White himself. At the end, when White explains the film’s title, it’s also surprisingly emotional. This movie ought to be required viewing, not just for Oscar voters but for every aspiring artist wondering how to build a life doing what they love. Beauty is Embarrassing isn’t simply a testament to the talents of Wayne White; it’s a snapshot of the ways in which creativity and the business of daily living can be inseparably fused.

The film opens tonight, Sep. 7, at Sundance Cinemas and moves to Laemmle’s in Pasadena on Sep 14.