Home Science How to See the Super-Blue-Blood-Moon Total Lunar Eclipse in L.A. 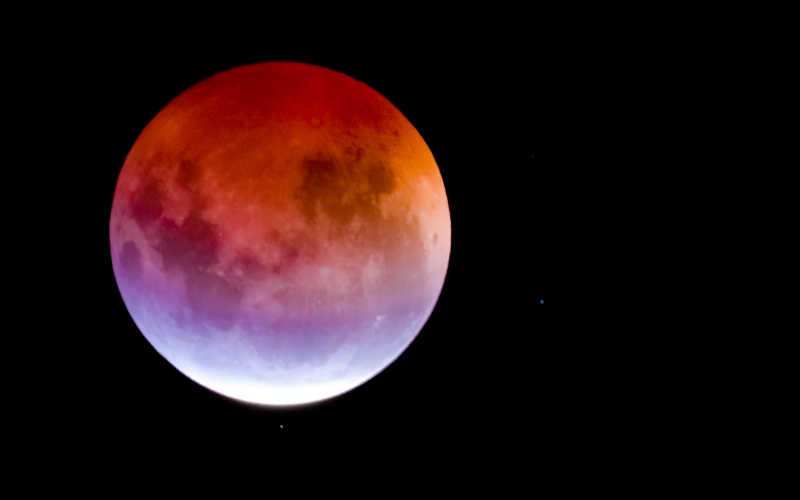 Unless you work the third shift or have a teething infant, chances are that you are not awake at 3:45 on weekday mornings. Well, the solar system, in all its majesty, is giving Earthlings a reason to set an early alarm on Wednesday, January 31 (aka, the middle of the night tonight): a super-blue-blood-moon total lunar eclipse.

Allow this under-qualified layperson to break that down, with the help of more qualified sources…

It’s a supermoon because the moon is closer to earth than it usually is, so it will appear 6 percent larger than normal. It’s a blue moon because it’s the second full moon this month. It’s a blood moon because the moon will appear red when it’s in the earth’s shadow during the eclipse because of something called Rayleigh scattering, which PBS Newshour explains thusly: “The gas molecules of Earth’s atmosphere scatter bluer wavelengths of light from the sun, while redder wavelengths pass straight through.” It’s also the first lunar eclipse since September 2015, and it’s apparently unique that all of these things are happening at once.

The eclipse is viewable (no eye protection needed, Donald Trump!) from anywhere in Southern California, but for ambitious astrophiles, the Griffith Observatory is hosting a free viewing event from 3:45-7 a.m. during Wednesday’s wee hours. According to the Observatory, totality begins at 4:51 a.m. and the maximum eclipse will occur at 5:29 a.m.; totality ends at 6:07 a.m.

Willing to crack an eyelid but not willing to get out of bed? The Observatory is also live streaming the eclipse starting at 2:45 a.m.

RELATED: This Griffith Park Night Hike Is, Surprisingly, Not Terrifying