Home Entertaining Sideshow Acts and Aerialists Hone Their Crafts at This Secret Circus in... 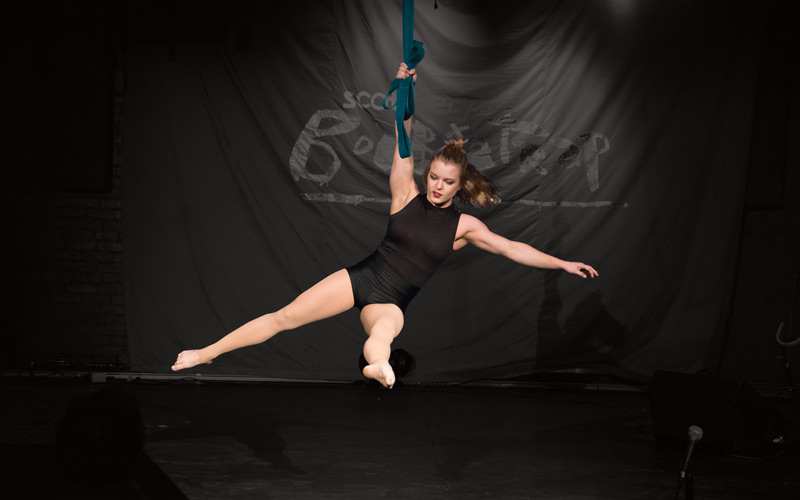 On a recent Wednesday night at Club Fais Do-Do in West Adams, a man in a neon green tracksuit straddled my lap, guzzled the remaining whiskey in my glass, and belted out the final verse of an improvised song about rhododendrons. This was my reward (punishment?) for sitting in the front row at Boobie Trap. The 90-minute weekly variety show, which now calls King King in Hollywood home, is curated by L.A.-based contortionist and performance artist Scot Nery;  15 performers—magicians, jugglers, sword swallowers, comedians, contortionists, burlesque dancers, and others less easily categorized—have four minutes each to impress before they get the hook. Think of it as an open mic for wildly talented oddballs and a refreshing alternative to your average hole-in-the-wall stand-up show. The unsolicited lap dance caught me off guard, but apparently that’s the point. “My favorite experiences in life are surprising and uncomfortable,” says Nery, who’s genuinely enthralled by the band of crazies he’s collected. “Sometimes we have to be dragged out of comfort to find fun.” That “fun” often materializes in the form of nail-biting stunts (like the time Jack Dagger—aka the best knife thrower in the world—hurled flaming blades into a wood chestplate worn by his assistant) and R-rated merriment (Jackass’s Steve-O has been known to get onstage naked). At less than 18 months old, Boobie Trap has attracted not only famous performers but celebrity attendees, from Emma Thompson to Mark Wahlberg. Nery juggles the whole evening with masterful precision, putting some of his talents on display between acts.

Most weeks the bill is stacked with vaudevillian vets, but Nery mixes in rookies whose vulnerable energy adds an unexpected dimension. Any misfires—like a man in a homemade superhero costume who, on the night of my visit, spent his four minutes promoting an obscure environmental organization—still have their own offbeat charm; even if the talent bombs, they’re quickly supplanted due to the show’s lickety-split pace. By the time tracksuit guy waded into the audience and sat on top of me, I was caught up enough in the spirit of the evening to tuck a couple of bucks into his waistband.