Home TV Secrecy, Subversion, and Sweet Tea: How to Throw a House of Cards... 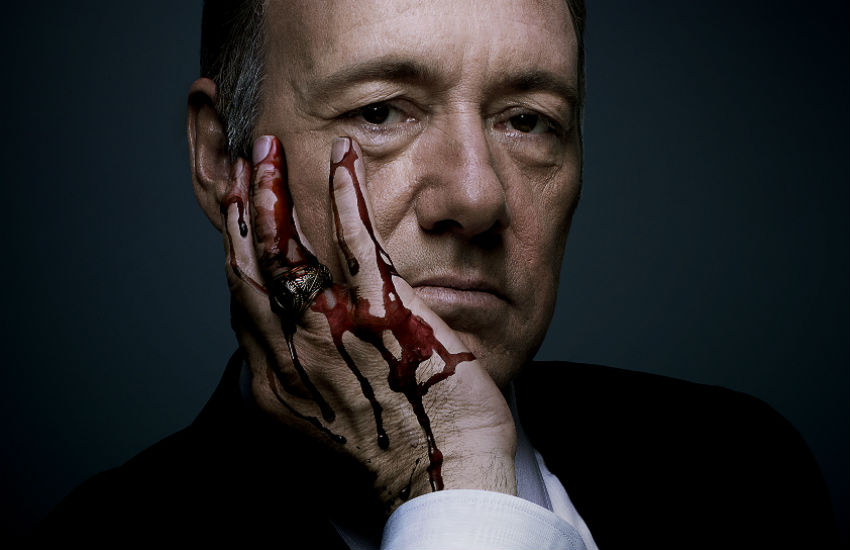 It’s been a year since Frank Underwood rapped his knuckles twice on his new desk in the Oval Office and the screen went dark. We won’t find out what he’s been up to since then until Netflix releases Season 3 on Feb. 27, but if we know Mr. Underwood at all, he’s been planning. In fact, all logic tells us he’s spent the year planning the most sophisticated, manipulative premiere party possible. Grab all your patriotic decorations and shed your moral scruples: Here are our tips for throwing your own bash inspired by Washington D.C.’s favorite Machiavellian party host.

Choose your friends wisely
Frank Underwood’s relationships are nothing if not utilitarian, so you should approach your guest list the same way. Only invite people who can bring something to the table—literally. If your best friend shows up empty-handed, show her the door. If your co-worker who sings Train songs in his cubicle turns up with a killer batch of homemade guacamole, whisk him inside like a VIP. (Bonus points if the guac actually kills someone; that’s a very Underwood move.)

Speaking of food, Frank Underwood wouldn’t throw a party without Freddy’s BBQ, so try The Hungry Pig (Westlake), Boneyard Bistro (Sherman Oaks), or Spring Street Smokehouse (Downtown) for your L.A. soiree. Serve the sweet tea in crystal glasses and the swine on fine china. The barbecue will be deliciously messy, so wear a paper bib to stop any sauce from getting on your perfectly pressed white shirt. (You can act like the bib is just a playful way to make the meal more authentic.) Have a clever anecdote ready for when you disingenuously propose a toast to your guests’ good health.

Then vent about them
Instead of hate-tweeting or WhatsApp-ing whatever peeves you during the party, launch into a soliloquy or Shakespearean aside in any direction. Alternatively, turn to no one in particular and roll your eyes. Watch out, though. This might betray your disdain for everyone you’ve invited and your delusions of dominance over them.

Convince them of your benevolence
Smile generously and don your friendliest South Carolina accent. Greet everyone by name and with a reference to the last time you saw them. Prominently display the logo of your significant other’s favorite charity, preferably one with vague international goodwill but sexy, ineffective leadership, and give a quick appeal for donations.

When your partygoers are thoroughly fooled about your character and you’re tired of their mediocrity filling up your living room, steal away to thumb through a well-worn copy of Richard III, or fire up your PlayStation 3 and ignore your guests completely.

Go all or nothing
Frank doesn’t do anything halfway. Your guests will be watching all 13 chapters of Season 3 (streamed on your TV through that PlayStation, of course), so start early. Those who nod off are weak. Note who they are and discuss their weakness with your closest confidante. Anxiously share a cigarette with her while staring out a frosty window, mulling your machinations.

The only acceptable break in the binge-watching is a game of House of Cards Against Humanity, which you can download and print.

Final dos and don’ts:
Do: Have a hushed-tones conversation with someone in a hallway, stopping whenever someone else passes by.
Don’t: Go near Metro platforms.
Do: Add a rowing machine to the room.
Don’t: Send any incriminating texts.
Do: Knock twice on the nearest wooden table when you want everyone to leave.
Don’t: Heed most of these tips.

Happy binge-watching, America. We are one nation Underwood.

This piece was written in collaboration with Nathan Stringer.