Home Books Season’s Readings: The It Books of Summer 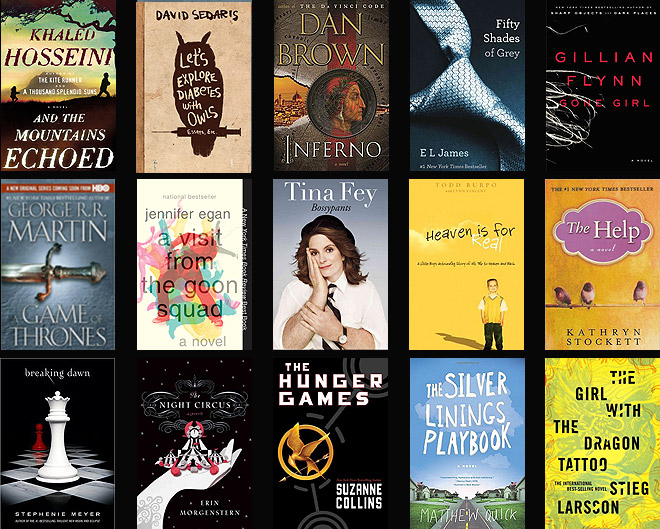 Summer is the only season that can claim its own genre of literature. Whether it’s an easy breezy beach read or a thought provoking Pynchonian tome, there will always be novels, memoirs, and mindless page-turners associated with the lazy days of the season.

With temperatures on the rise, we’ve compiled a list of the hottest reads from summers past, which should provide you with plenty of reading material in the coming months.

And The Mountains Echoed
By Khaled Hosseini
If you want to sound like the well-read type at a dinner soiree, consider picking up the third novel from #1 New York Times-bestselling author Hosseini (The Kite Runner, A Thousand Splendid Suns). In this multi-generational tale that spans six decades, Hosseini examines the way we love, how we care for one another, and how the choices we make today can transcend generations.

Let’s Explore Diabetes With Owls
By David Sedaris
If you’re unfamiliar with essayist and radio personality David Sedaris, there’s no better time than now to get acquainted with his work. With his eighth collection of essays, which is every bit as good as his masterwork Me Talk Pretty One Day, prepare for an exploration of colonoscopies, murdered Pygmies, and French dentistry.

Inferno
By Dan Brown
The author of international bestsellers The DaVinci Code, Angels and Demons, and The Lost Symbol has a new mystery filled with labyrinthine plot twists and ambigrams. This time, though, our good friend Robert Langdon (hero of the aforementioned bestsellers) is it’s solving a riddle involving Dante’s Inferno.

Fifty Shades of Grey Series
By E.L. James
They’re no one’s idea of great literature, but you can’t deny the success of these record smashing bestsellers – even though they originated as Twilight fan fiction. The steamy page-turners are short on substance but long on S&M-tinged romance (if that’s your kind of thing). We dare you to read it in public without feeling a bit embarrassed.

Gone Girl
By Gillian Flynn
Last summer’s breakout thriller examines the marriage of a narcissist and a sociopath. Get ready for the movie adaptation, which is rumored to star Reese Witherspoon.

A Song of Fire And Ice Series
By George R. R. Martin
Fans of HBO’s Game Of Thrones should be familiar with the fantasy-laden series on which it was based, but Martin’s novels will please pretty much anyone who picks them up. Beware: Once you begin these novels, you’ll find it nearly impossible to put them down.

A Visit From The Goon Squad
By Jennifer Egan
It’s hard to describe this novel without sounding like we’re writing Jennifer Egan’s PR: It’s fantastic. Brilliant. Impactful. If our opinion isn’t enough to sway you, take it from the pros: A Visit From The Goon Squad won the 2011 Pulitzer Prize and the National Book Critics Circle Award, both for fiction.

Bossypants
By Tina Fey
Is Tina Fey funny? Yes. Is she a brilliant author? Not so much. But the pros outweigh the cons in this, her first foray into the world of memoir. Bossypants covers most of Fey’s professional life, from her early years on the Chicago improv scene to her tenure on NBC’s 30 Rock. This is an easy read that will make you laugh out loud, which makes it a winner.

Heaven Is For Real
By Todd Burpo
For those who are unfamiliar, Heaven Is For Real is the tale of a four-year-old Colton Burpo who, during an emergency appendix surgery, died on the table and went to heaven (a detail he matter-of-factly stated to his parents months after the ordeal). This 163-page account, told by his father, became the sleeper hit of 2011 before sitting atop the New York Times bestseller list for over a year. It’s a quick, meaningful read that’s not only fascinating but extremely touching.

The Help
By Kathryn Stockett
If at first you don’t succeed, try, try again. Now wildly successful, The Help was actually turned down by publishers 60 times before literary agent Susan Ramer agreed to represent Stockett. Not only was the tale of African-American maids working in white households in 1960s Mississippi a New York Times bestseller, it spawned an award-winning feature film.

Breaking Dawn
By Stephenie Meyer
In this, the final installment of the Twilight series, you’ll find sex, murder, lies, and unexpected pregnancies. You won’t confuse Stephenie Meyer with Norman Mailer but no one can accuse her of writing boring stories.

The Night Circus
By Erin Morgenstern
If Water For Elephants and The Prestige had a baby, it would be The Night Circus. Two young magicians tumble head first into romance though each of them has been unknowingly prepped since childhood to try and do away with the other. The novel’s Le Cirque des Rêves, or Night Circus, is the platform from which they strive to outdo each other, in both imagination and skill.

The Hunger Games
By Suzanne Collins
This hugely popular trilogy is surprisingly smart considering it’s geared towards teens. In case you haven’t heard of the novels or seen the film starring Jennifer Lawrence, the story take place in dystopian Panem, where 12 different districts are ruled over by the iron-fisted Capitol. Each year, The Capitol requires 24 children—a boy and a girl from each district—to fight to the death in “The Hunger Games.” The story is unique and engrossing, and the writing is riveting.

The Girl With The Dragon Tattoo
By Stieg Larsson
The first novel in Larsson’s Millenium trilogy (which was conceived as a ten-part series but remains incomplete due to Larsson’s death in 2004), jumped to the top of Swedish bestseller lists and made its way to America soon after. In these novels about sharp-witted yet socially awkward Lisbeth Salander and investigative journalist Michael Blomkvist, Larsson weaves an intricate tale of murder and mystery that will have you on the edge of your lounger all summer long.