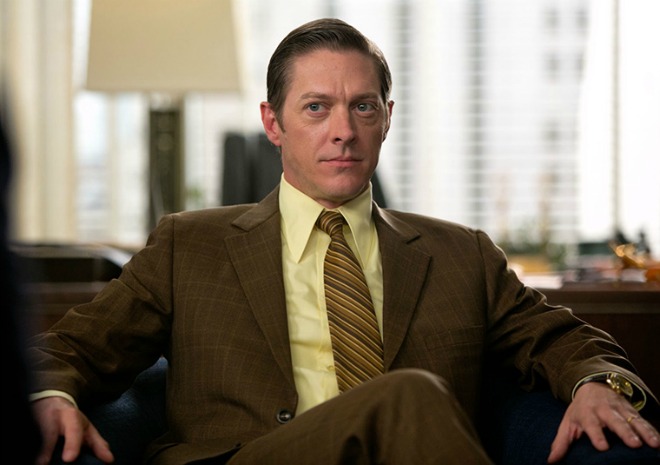 If you thought we were going to make it through a season without Matt Weiner slipping in some topical gun control commentary (or self-referential jokes about the Writers Guild strike), think again.

And to everyone who remained plagued by niggling doubts after Bob Benson’s beaming, knee-nudging declaration of love last week and thought, “Nah, that guy’s still not right” (we weren’t among them) — the NSA needs your help.

This week’s episode title was lifted from a problematic Shakespearean play, another nod to classic lit in a season that started with the Inferno. In The Merchant of Venice Portia reprimands the Jewish shyster Shylock over his effort to extract a pound of flesh from a man who has defaulted on his loan, per the terms of their agreement. “The quality of mercy is not strain’d,” she counsels while pressing him to reconsider. “It droppeth as the gentle rain from heaven upon the place beneath…it blesseth him that gives and him that takes.” Characters try to be magnanimous but, like Portia, they fail to observe their own faults. Those sweet showers of mercy fall more like acid rain.

Ken, who previously cheated death during his stint as a blindfolded Chevy racecar driver, finds his number up again. The “fat yahoos in cheap suits” pull the trigger during an ill-advised hunting expedition, bagging the greatest prey of all. (Miraculously, Ken doesn’t lose his eye though it’s interesting to note that one of the show’s most perceptive characters, and a writer to boot, has twice endured ailments related to vision. Is there a pun in here about Ken having to turn a blind eye to survive at Sterling Cooper?) The prototypical liberal (he hates cars, hates guns, and can’t even look at steak) resigns in fury from the Chevy account, forcing Pete back into knee bumping proximity with the one ad man he’d like very much to forget.

We’ll come back to Pete. At the beginning of the episode, Don is still sweating through the fallout of Sally’s rapidly accelerating sexual education. When Betty calls Don to discuss their daughter, he’s so relieved it’s not about him and Sylvia he throws money at her. Boarding school? Sure. Jacqueline Kennedy Onassis? Sign her up. Sally’s ploy, escapist though it may be, lets Don off the hook, catapulting her into a Gossip Girl world of shiny-haired vixens that’s probably far more destructive in the long run.

While Don’s indiscretions should make him sympathetic to the missteps of others, he proves anything but. The on-again, off-again (and so far as we know, chaste) romance between Peggy and married man Ted warms, with the whole office abuzz over their mutual admiration routine. After a discomfiting movie theater encounter Don seems content to let them be, until their collaboration on an ad for St. Joseph’s Hospital, modeled after an iconic, claustrophobic shot from Rosemary’s Baby, sends it over budget… by thirty-five thousand dollars. Well-versed in the subtleties of psychological warfare since the merger with Ted, Don defers the direct approach for the sadist’s playbook. During the client meeting he lets Ted dangle, letting him panic that Don will expose his emotional affair with Peggy. Don doesn’t, ginning up some of the old magic with a sentimental appeal to Frank Gleason’s memory, but the point is made. Don cloaks himself in the mantle of the agency, Ted goes home early (to avoid Peggy, consider resignation, and/or make love to his wife?) and Peggy calls Don a monster. It’s worth noting that Peggy still knows nothing of the Dick Whitman switcheroo; that secret is for Pete to keep. But her comment still makes Don curl into a fetal position, because he fears it’s true.

Of all the gin joints… If we could have picked one character to extend sweet, benevolent mercy, is there any doubt Pete wouldn’t have made the list? Pete’s solution for reconciling his sudden Chevy promotion with his distaste for Bob (give the guy a leg up while tearing him down) leads to a headhunting mission for professional laughingstock Duck Phillips. Duck’s unwitting discovery—that “Bob Benson” is an inbred Appalachian who fabricated his educational records and professional references and professionalized his cheerful servility, perhaps a wink at 30 Rock’s Kenneth—hands Pete explosive leverage. He doesn’t need Bob to show him where the landmines are. Bob is one all by himself.

Pete, who faced a similar conundrum in season one when he went snooping in Don’s desk during his oiliest upstart phase, opts instead for restraint. “I would like to think I’ve learned not to tangle with your kind of animal,” he tells Bob. Pathological self-reinventors have him beat. “Who you are and where you are is not my concern.” He needs Bob to smooth the way with Chevy. In any case, his own failures and Don’s accumulated demons have taught him the limits of judgment and the impossibility of knowing another person fully. He calls a truce, so long as Bob avoids footsie in the future.

Who knows what the finale holds, but the Chekhov principle dictates that if you put a gun onstage in act one, it’s got to go off by act three. Pete polished his after Ken got shot. Don’s already secretly, subconsciously suicidal. And he’s sleeping with another man’s wife. Will Weiner detonate the Arnie Rosen bomb this season or sit on it till 1969? We’ve got to get Nixon elected.

Assorted best moments:
Harry’s call from California. Don: “You finally found a hooker that takes traveler’s checks?” Harry: ‘Why did I tell you that?”
Joan’s “give me a break” face throughout Peggy and Ted’s nauseating routine. She doesn’t always have much to do but she’s so present.
Don’s advice on running a TV show and avoiding 18 month-long breaks between seasons: “Residuals. You can’t let them sneak up on you.”