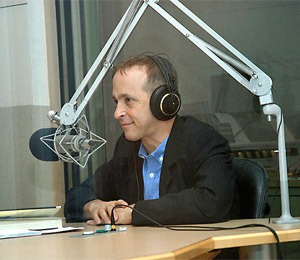 Thousands of NPR tote bag-toting fans of David Sedaris converged on Tuesday for an appearance by the humorist (tonight’s Royce Hall show is sold out) at the Terrace Theater in Long Beach. He delightfully whined on about peeing his pants and how not to care for pets before introducing us to the shorn unicorn, crying snake and serial killer rabbit featured in his upcoming book Squirrel Seeks Chipmunk: A Modest Bestiary, set for release in October. At the end of the show, the house lights came up and Sedaris hosted a short Q&A where he introduced us to some of his current favorites: Irish Girl by Tim Johnston, anything by playwright Alan Bennett and filmmaker Kyle Alvarez, who has optioned one of Sedaris’ stories for a film.