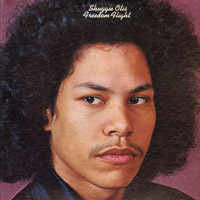 The crowds that lined up for last Wednesday night’s sold-out homecoming of soul singer/guitarist Shuggie Otis could barely contain their excitement. “Shuggie is so SoCal!” one woman gushed. An aging hippie-dude told his friends: “I saw this film once. It was, I think, a home movie shot at Leon Russell’s house in Laurel Canyon. It’s little Shuggie cutting heads with T-Bone Walker. He couldn’t have been more than 15 or 16 at the time, and he was amazing even then.” Everyone seemed confident that their long wait to get into the Echoplex would be rewarded by seeing an omni-talented member of L.A. musical royalty (Shuggie is the son of R&B pioneer Johnny Otis and the son-in-law of jazz bandleader/composer Gerald Wilson). Signed to a record deal at age 14, he has been described as the lost link between Jimi Hendrix, Sly Stone, and Prince as well as the harbinger of Maxwell, Frank Ocean, and Lil Wayne. It should have been a transcendent night.

It wasn’t. After the 59-year-old Otis – dressed like a badass toreador in black boots, tight black pants, white blouse, and black satin vest – and his seven piece band took the stage more than a half hour late, it took another 15 minutes to fix problems with the AC chord and guitar amp (he blew up two of them) before the music lurched to a wobbly start. When Otis finally stepped up to the mic to sing the first lines of “Inspiration Information” from his 1972 cult classic of the same name, there was no sound on the vocal mic.

The crowd was deferential and endlessly forgiving, shouting out encouragement to a performer who looked increasingly befuddled and embarrassed. “I’m just Shuggie’s brother, okay?” he joked. “He’ll be out in a few minutes and then we can finish that tune.” A blast of errant feedback from his shiny new Gibson guitar brought hopeful applause, and things settled a bit for “Aht Uh Mi Hed.” The song showcased (briefly, tantalizingly) Otis’s supple, almost jazzy guitar lines as they contrasted with the aggressive, horn-heavy groove of the band. Then, everything fell apart with woodwind player Michael Turre marking time with a flute solo not heard since the hanging-terrarium ‘70s. Otis kept flashing stone-faced glares at the sound peeps while the cheers of the crowd, which steadily thinned over the ragged 90 minute set to only the hardcore faithful and looky-loos, made him crack a tight smile.

Outside, the talk was nasty. Many patrons blamed the Echoplex, but this wasn’t the only show on Otis’ international mini-tour that was marred by such difficulties. “I just can’t believe the game face the musicians are putting on,” said one blonde girl. “All because a roadie can’t set up a mike!” Her shaggy companion disagreed: “No, that was like a high school pickup band in there. They looked like they had never played together before.” (In fact, the band was comprised of vets like trumpeter Jerry Douglas and drummer Marvin “Smitty’ Smith.) “There are people waiting in line to leave,” said a dude in a fedora as he swiped at his iPhone.

Back inside, the band was lurching through “All Night Long,” the kind of boilerplate blues jam that Otis’s father used to oversee back in the days of Central Avenue and the Club Alabam. The only problem was, it looked like one of the roadies had jumped on stage to showcase some Hendrix-meets-Van Halen fretboard wanking while Otis stood off to the side in a secondary role, trying to salvage the unsalvageable.

Read the full review at StompBeast.