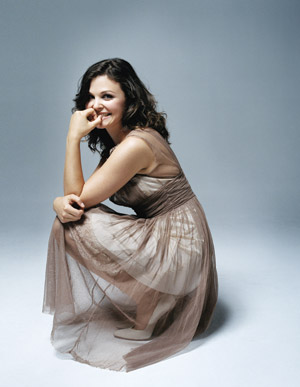 On Chung King Road, a gallery-strewn alley in Chinatown, there is not a garbage can or spot of trash in sight, but one Chung King address has refuse on the wall. At Peres Projects, a large canvas is dotted with what looks like pigment squirted straight from the tube. Ginnifer Goodwin leans toward the composition, sniffs once, then twice, and announces: “It’s bubble gum.”

Goodwin is gallery hopping with her buddy Dori Howard, a Paramount executive she bonded with after they met  years ago in New York. They are continuing a conversation about art that has long engaged them. Goodwin, who plays Margene Henrickson, the youngest of three wives in the polygamous family on the HBO series Big Love, has a special reason for taking this walk. She will star in the upcoming film He’s Just Not That Into You and has recently bought a house, vintage 1923, so she is on the lookout for paintings to purchase. She eyes the work in front of her. “I wonder,” she says finally, “if this person had to study the masters. I mean—that’s chewed gum.”

Next she comes upon a black-on-black nightmare, stormy, writhing, and the color of burnt wood. She shakes her head no. “This to me is all emotion,” she says. The angsty painting makes her think of acting, and she mentions someone she saw recently in a play who spent most of the performance crying. “In real life,” she says, “people don’t cry when they are sad. What makes them cry is when whatever makes them happy gets taken away.” She pauses, then whispers, “I think it’s kind of masturbatory.”

Goodwin is 30 years old and stands five feet six. Cinnamon hair frames her alabaster face, which is traced with blue veins at the temples. She lets you know what she doesn’t know about art while freely expressing what she does—“we’re in Rothko-land here”—in a way that makes her an excellent art-shopping partner. She turns to follow Howard into a storefront farther down the alley, then into a curio shop that looks as if it hasn’t been dusted since the Reagan administration. She pulls a poster from a stack of pictures. “Let’s discuss what true art is,” says Howard, clearly used to playing the role of docent. “It’s a statement of the time in which it was created.”

Goodwin holds up the poster—a shot of Ricky Schroder in his ’80s Silver Spoons glory. She hardly needs to say it, but she does. “Now that’s art.”

Ginnifer Goodwin  seems to know her own mind. Even when she was growing up in Memphis, she always wanted to act. “There was no backup plan,” she says over lunch at a Little Tokyo restaurant. Her father was Roy Orbison’s orchestra leader, and her mother encouraged their children’s creativity. One day when Goodwin’s sister brought home a toilet she’d found on the street, their mother’s reaction was “I can’t wait to see what she will make with that.” Goodwin’s Elvis haircut and interest in theater put her at odds with some of her schoolmates. Before there was HBO or her role as Gigi in He’s Just Not That Into You—which makes her a poster child for plunging headfirst into the now—there was clown school. She flunked. “I was hoping to learn how to cram into a Volkswagen Beetle, or at least how to do pratfalls,” she says, laughing. “But we were studying classical clowning technique. I did have to get a nose.”

On the rebound, she studied classical theater at the Shakespeare Institute in Stratford-upon-Avon and earned a bachelor’s degree in fine arts at Boston University. Then came TV work and a move to the West Coast. She recently ended a two-year relationship with actor Chris Klein, whom she met on the set of the film Day Zero.

How has living in L.A. changed her?

Without warning, the conversation dissolves into a giggle at a private memory about a “fashion intervention” staged a few years back at a Four Seasons soiree to which Goodwin wore a Salvation Army outfit. A stylist, says Howard, pulled Goodwin aside and told her, “ ‘You look really cute, but you’re sabotaging your career by being seen like that.’ ” As Goodwin listens to Howard tell the story, she nods enthusiastically. Today Goodwin is a regular at fashion events. She has modeled for Gap, and she will star alongside Julianne Moore and Colin Firth in clothing designer Tom Ford’s directorial debut, A Single Man.

In Walk the Line, while playing the small role of Johnny Cash’s first wife, Goodwin rendered the most complicated portrayal in the movie; in Big Love, week by week her needy and seemingly naive Margene grows in maturity and domestic clout. It is a tribute to Goodwin’s skills as an actor that she can keep an audience off balance and deliver surprise so efficiently. Of this season, Big Love’s third, she says, “If it can go wrong, it goes wrong. We find out Margene is incapable of dealing with trauma.” There is plenty of controversy in the show, which is about a member of a breakaway Mormon fundamentalist sect and his three wives, as well as on the set, where there have been lively discussions about efforts by religious groups, especially Mormons, to outlaw gay marriage. “We definitely talked about that,” Goodwin says. “Who are we to say that certain couplings—or in our case triplings—are legally inappropriate? What happens in the bedroom is everyone’s personal decision.”

Goodwin sees to it that what happens on the set stays on the set. She has a carefully worded contract that spells out almost second by second what can be photographed in her bedroom scenes. To keep slipups from finding their way onto the screen, she takes an additional step. “I write things in Magic Marker all over my body—‘No way, Jose,’ ‘Bill, stop looking at my boobs.’ ’’