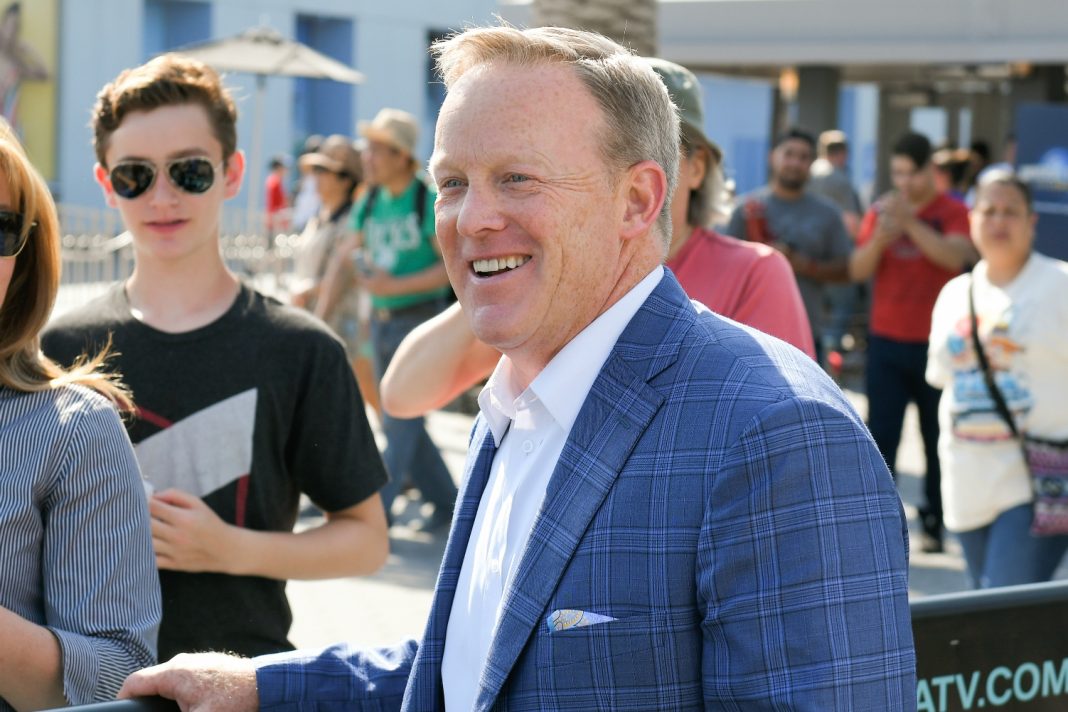 Sean Spicer’s tenure as White House Press Secretary was historically short, but the marble-mouthed espouser of “alternative facts” sure made a big impression. His awe-inspiring willingness to tell untruths to a room full of journalists and (poorly) argue that facts were things that could be “disagreed” with made him into a meme and, famously, a Saturday Night Live character, a court jester to laugh at through the tears after Trump’s inauguration.

But ABC may have mistaken America’s bewilderment with affection when the network cast Spicer on season 28 of Dancing with the Stars. The backlash—even against Spicer’s fellow contestants—has been swift, and at least one big-name Hollywood showrunner is calling on Disney boss Bob Iger to give Spicer the boot.

Thursday evening, Grey’s Anatomy and Station 19 showrunner Krista Vernoff took to Twitter with her displeasure, suggesting that the decision to cast Spicer be reversed. “I deeply abhor this decision by the company I work for and truly love,” she tweeted. “This man lied daily, to our faces, and made a mockery of our country. This is not cause for celebration or celebrity. It’s not too late to change this plan. Please @DancingABC @abc @RobertIger.”

I deeply abhor this decision by the company I work for and truly love.

This man lied daily, to our faces, and made a mockery of our country. This is not cause for celebration or celebrity.

It’s not too late to change this plan. Please @DancingABC @abc @RobertIger https://t.co/OAlvpgSpJg

The previous day, host Tom Bergeron released a statement on Twitter measuredly expressing his displeasure with the decision to cast Spicer. “A few months ago, during lunch with DWTS’ new Executive Producer, I offered suggestions for Season 28,” he writes. “Chief among them was my hope that DWTS…would be a joyful respite from our exhausting political climate and free of inevitably divisive bookings from ANY party affiliations…subsequently (and rather obviously), a decision was made, as we so often say in Hollywood, to ‘go in a different direction.'”

Some thoughts about today pic.twitter.com/aCQ4SHrGCI

For his part, Spicer has responded to the backlash by saying he hopes DWTS will be a “politics-free zone,” but his buddy Donald Trump has already eliminated the possibility by tweeting his support of Spicer. And while he’s on the show, Spicer will actively be on the payroll at the pro-Trump super PAC America First Action.

Spicer’s DWTS co-contestant Karamo Brown had to delete his Twitter profile after he defended Spicer, calling him a “really good, really sweet guy” in an interview with Access Hollywood. “People would look at us and think that we’re polar opposites,” Brown said. “But I’m a big believer that if you can talk to someone and meet in the middle, you can learn about each other and help each other both grow.” Brown is one of the five hosts of the Netflix reboot of Queer Eye; Trump’s administration is widely seen as anti-LGBTQ. Before deleting his account, Brown reportedly began block LGBTQ critics.

RELATED: Karamo Brown’s About to Get You in Your Feelings