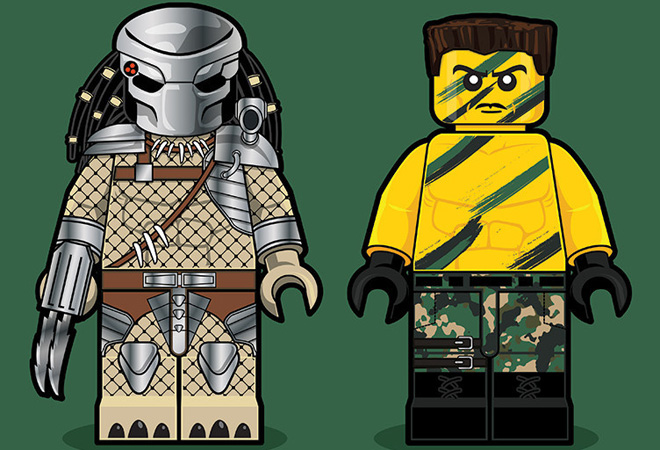 The 1980s are back (as our July issue attests), and no one appreciates the decade more than Dan Shearn. The U.K.-based artist is known for his mini Lego figures, and this week he marries his two passions in Lego Memories: (Or a Man-Child’s Recollection of the 80’s Through Lego), an exhibition at the Hero Complex Gallery.

The show, which opened June 10 and runs through Sunday, features 70 pieces made from the iconic children’s toys. The figures Shearn depicts include Scarface, the Predator, Akira, and Beetlejuice.

Shearn says his five-year-old son inspired his works. Building Lego sets with his child reminded him of his youth and his favorite ’80s icons.

“I chose the ’80s because it was a very exciting time. Great films before the advent of computer generated special effects. Music was starting to diversify; so much of it still has relevance now. In the early ’80s, I spent time travelling across the United States with my family, so I discovered comic books and Saturday morning cartoons, all the cool stuff you couldn’t get in the U.K.”

Last August he began work on the ’80s-themed Lego figures and in December, Adam Smasher, the director of the Hero Complex Gallery, suggested a show. Shearn spent the next two months drawing about 100 individual illustrations, which he separated into 65 categories.

With the ’80s exhibition off his plate, Shearn might have to consider other decades, but for now, he’s happy to bask in the retro glory. “I never thought I would ever do something like this,” he says. “I’m glad this is making so many people happy.”