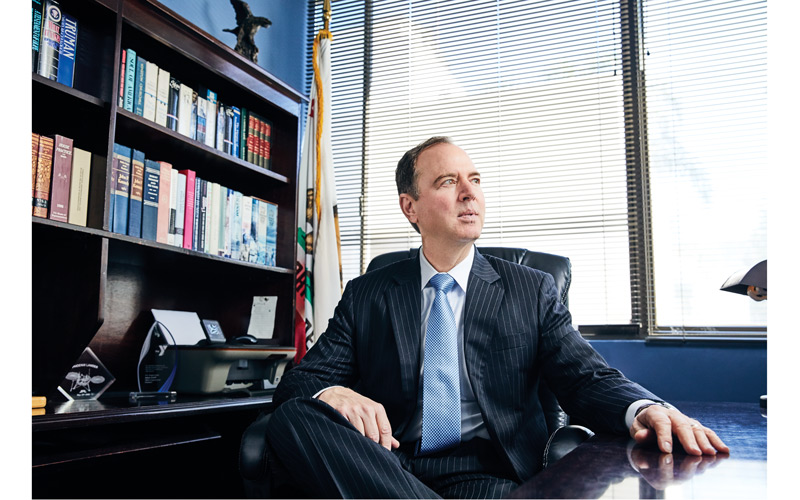 If anyone can take being on an even keel to an extreme, it’s Adam Schiff. The 57-year-old congressman from Burbank is able to sit for more than an hour with a reporter in a crowded diner on a hot Saturday afternoon, discussing the Russian plot to subvert the American electoral process and the extension of the 710 freeway without raising his voice an octave or taking more than two sips from his tall glass of iced tea, which rests perilously close to the edge of a Formica table.

Not that being mild-mannered is necessarily a bad thing, considering that he is the ranking Democrat on the committee investigating whether the Trump campaign may have colluded with Vladimir Putin to tip the election.

Schiff isn’t easily distracted (he didn’t check his phone once during the interview), and throughout his career he has taken setbacks and even downright defeat in stride. After all, this is a man who relieves stress by competing in triathlons. Schiff scored his highest-parole conviction as a federal prosecutor—a case involving an FBI agent trading secrets for sex to a Soviet operative named Svetlana—after two previous trials and an appeal had failed to make a conviction stick. He lost two races for the state legislature before winning a state senate seat in 1996. Home is now Washington, D.C., but we caught up with him during one of his biweekly trips back to his district.

In L.A. there’s a tendency to regard the part of the country that went overwhelmingly for Trump as if it were another planet. You sit across the aisle from people who represent these areas. What’s it like to work with folks who view the world through such a different lens?
I can understand my colleagues who feel very differently on issues, whether it’s guns or health care. I can accept different conclusions, but I can’t accept people who operate on a fundamentally different set of facts. For our investigation [into allegations of Russian meddling in the election], the goal is not to presume any conclusion but to do our oversight and follow the facts wherever they lead.

Are facts enough? I mean, we have people marching for science, as if that were suddenly a controversial issue or something.
I try to emphasize in the Russia investigation why people should care about it. The key point is that the intelligence community has concluded that the Russians are going to do it again. I think they’re doing it right now in Europe. There’s no way to perfect our cyber defenses. The Russians are too capable; it’s probably the most asymmetrical of all battlefields because on defense you have to protect everything, and on offense you need to just find one vulnerability. The only way we can protect ourselves is if we inoculate ourselves—if we have a well-informed public that understands what we do and how we do it and we form a consensus on what our response should be. Both parties ought to reject foreign interference in our elections no matter who it helps or who it hurts. That’s the best defense, and we can’t get there without a real captain.

California, or at least the coast, is starting to feel like a cocoon. Are we drifting farther away from the rest of the nation?
One of the things I keep coming back to is, when you look at the map from 30,000 feet and you see this red area in the middle and the blue areas on the coast, you’re tempted to think that the West Coast should secede or the East Coast should secede. But when you look within that map, there are a lot of other common denominators. For example, communities that were growing supported Hillary, and communities that were shrinking supported Trump. The challenge for my party is to fashion an agenda that resonates as well in the communities that are shrinking as it does in the communities that are growing. It may not be these coal jobs, but that doesn’t mean we can’t bring new and better jobs. I think our party spends too much time talking about messages when our more important challenge is, What is the agenda that we can offer to all 50 states?

And how do you go about communicating that?
When I ran for the state legislature in 1994 and lost, I did a campaign stop at a Burbank senior center. Everything was going swimmingly until the last question about Prop. 187—

The ballot measure that sought to deny state services to undocumented immigrants.
It was very popular. I knew my answer was not going to be the right one because I was against it, and I’m sure I sounded defensive. By the time I was done, they were ready to ride me out on a rail. Two years later I ran for the state senate. I went back to the senior center, and in what looked like a replay, the last question was on Prop. 209, the anti-affirmative action measure, which I was also against. So I decided to respond differently. I said, “I’m going to tell you exactly why I’m against it. If you just want to send someone who is going to tell you what you want to hear, I am not your guy.” They applauded me for disagreeing with them. People don’t always need to agree with you, but they do want to respect you.

All politics is local, particularly infrastructure. You’ve opposed the effort to connect the 710 freeway to the 210 with a subterranean tunnel. Why?
The tunnel turns out to be far more expensive and disruptive than people thought. We could reach resolution of a different kind. It’s time to stop putting all of our eggs either in a freeway-upgrade basket or a tunnel basket because neither of those is going to happen. The longer we fight this fight, the longer the region suffers the effects of congestion.

But the tunnel has been proposed as a way to reduce congestion.
What I think is changing is some of the core assumptions that we operate under in viewing transportation 50 years ago versus today. One of the big quality of life/transportation/open space issues in my district is the Hollywood Central Park. You have the 101 freeway dividing Hollywood decades ago, and along comes a group that says, “Let’s cap the freeway. Let’s build a park over the freeway. Let’s improve air quality, bring housing and jobs.” That is much more of the kind of transportation/quality of life vision than simply paving more of the area around us.

It seems that people resist just about any major infrastructure change. How do you deal with that?
There are still enormous planning challenges, and we went through that with the Gold Line light-rail, which I was involved in. A group in Pasadena came to me as a state senator and said the MTA was killing the project. We brainstormed and came up with legislation that would take the project away from the MTA and establish a new joint-powers agency. We fought tooth and nail, and the state legislature got it passed and took that project away from the MTA and built it on time and under budget. It was a streamlined authority, and the fact that it could operate under budget says a lot about how that model can work. It can be done. It can also be terribly mismanaged. California is geographically structured for a high-speed rail, and it’s galling that other countries can build high-speed rail and we have so much trouble in this country.

And where does California stand vis-à-vis the federal government?
Years ago, when George W. Bush was president and we had the energy crisis in the state with rolling blackouts, we had a bipartisan California delegation meeting. We were with Vice President Cheney, and I remember just how disdainful he was with what seemed like our entire state. It was clear they were not going to give our state the time of day. I’m not sure the president views California that way, but he has demonstrated a certain vindictiveness, opposing our agenda on climate, on DACA, on everything.

So is this a train wreck in the making?
California is also not without its political heft. Some of the most senior leaders from both parties are from this state, and we’re going to need that leadership to make sure the administration doesn’t retaliate against us.

Considering the dysfunctional culture of Washington, should we remain confident that your committee can still do the work?
It’s going to be enormously challenging, obviously, because it’s so politically fraught. Even beyond that, we’re a small committee with a small number of staff resources with a huge investigation to do. So I have deep concerns about our capacity to do something of this magnitude. I’d been urging without any success that we work jointly with the Senate, the way we did after 9/11. That was the right model then, and what happened with the presidential election in 2016, with foreign intervention, justifies the kind of investment an independent commission can make.

With high-handed actions like the James Comey firing, there’s worry about the resiliency of our democratic institutions. Is there reason for optimism?
The firing of James Comey was yet more proof, if any was needed, that this president has little regard for the independence of the Justice Department or any other institution in our system of checks and balances. Whether we are resilient enough to push back will depend a lot on whether Congress rises to the task and whether enough of my GOP colleagues are willing to put country over party. If they don’t, I have every confidence the voters will, and the midterms will provide a far more potent check on the president’s imperial conduct.

Before joining Congress 16 years ago, you were a federal prosecutor for six. What lessons did you take with you?
Probably the most important one is that when you’d go into a courtroom, you’d fight it out with the defense counsel, and when the case was over, you’d leave the courtroom and have a beer with the opposing counsel and tell war stories about the case, and years later you’d tell the same stories, but exaggerated. It wasn’t personal, it was professional, and you learned to leave those differences in the courtroom. I get to Congress, and a lot of people are fine, but some make it very personal. “If you disagree with me on this bill, then you’re corrupt or you’re the enemy.” What I tried to do with Congress was draw on that experience and not make policy differences personal.

And you also compete in endurance sports, so what should we conclude about you?
I’m a glutton for punishment.

You’re Jewish and your wife is Catholic. How does that work?
It gives your kids this hyperpowerful strain of guilt—Jewish and Catholic guilt.