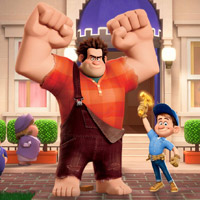 One of the humanitarian highlights of the Santa Barbara International Film Festival (besides the earnest documentaries) is a philanthropic program called AppleBox Family Films. The target audience for the free weekend morning screenings is supposed to be Santa Barbara’s low-income families, and if you think that’s an oxymoron in this privileged enclave, then you don’t know the blue-collar communities that have historically resided along Milpas Street and in the tracts of Carpinteria.

Judging from the crowd that filled the Arlington Theater for a 3D screening of Paranorman, that’s exactly where many came from. But I’m also pretty sure there were a few Montecito and Hope Ranch folks mixed in too–how else do you stay rich if you don’t watch your pennies? Part of the joy (besides saving big bucks—the popcorn and Cokes were free too) is spending any time at all in the Arlington. This quintessential example of art deco atmospheric theater design transports you out of the modern world just as effectively as the films being shown inside. As is characteristic with that style of moviehouse architecture, several versions of which once dotted the state, the ceiling inside is alive with star constellations, and at one time clouds would skid across its surface as well. The Arlington fosters the additional illusion of sitting outside in a Spanish courtyard, complete with balconies and lamps (it’s all trompe l’oeil; the shadows cast by the lamps, for one, have been painted on the walls).

As I sat waiting for the film to begin, wondering how many kids were unconsciously making memories of this place, I listened in as the couple behind me reminisced about sneaking into the theater (one would buy a ticket and then open the door leading to the alley for the others to come in). I grew up in Santa Barbara as well, but being good Catholic kids, we always paid full fare. As an adult, I’ll take any excuse to roam this theater, to gaze on the Moorish painted ceilings in the anterooms and extraordinary Spanish tiled stairway and fountains. Luckily, the movies that tend to make it into this theater—the latest Harry Potter and Hobbit iterations most recently—are well-suited to the romantic nature of the place.

For its upcoming Applebox offerings, the SBIFF will screen Wreck-It Ralph in 3D this Saturday and Franknweenie on Sunday. Start times are 10 a.m. but expect long lines well ahead of time and a half hour lag before the movie actually begins as the theater slowly fills. It’s worth it.