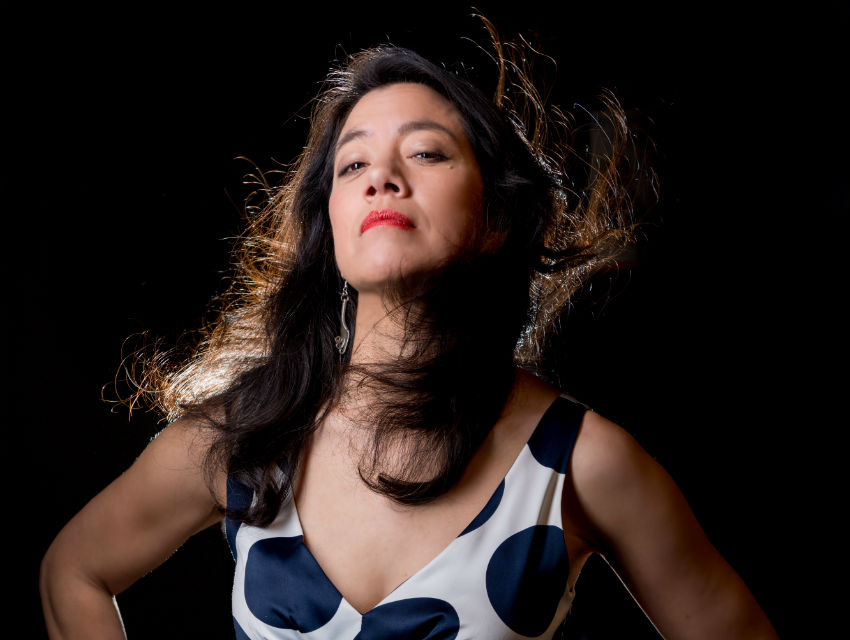 Sandra Tsing Loh is a writer, performance artist, and radio commentator whose memoir Madwoman in A Volvo: My Year of Raging Hormones was selected as one of The New York Times’ 100 most notable books of 2014. Loh takes her hilarious observations on the female midlife experience to the Edye Theater at the Broad Stage in Santa Monica from July 9 to August 2. We sat down with the multi-talented entertainer to get the scoop on her process, the new era of menopause, and the inspiration behind her upcoming show The B**** is Back: An All-Too Intimate Conversation with Sandra Tsing Loh.

Tell us a little bit about your show.
I’ve never developed a show this way. I was on book tour and where you pretty much just go to a venue, do a 15-minute Q&A, read for 15 minutes and then take questions from the audience, it’s a pretty easy kind of role. But at my UC Santa Barbara appearance, somehow I had missed the memo that there were a couple hundred people in the audience, they had paid money to be there, and I was supposed to speak for 60 minutes. I had no material! So I took some notes to the podium, and I walked off the podium to give them an intro and explain the journey, and I never went back to the podium because these stories and these riffs just started connecting into this journey.

So that’s what this show is. It’ll be in a cabaret space with tables and food and special adult beverages, and we’re just gonna have a ball.

When I spoke at UC Santa Barbara, there was a big age range of women, pre-twenty to eighty, and it was really fun having this cross-cultural conversation. I think for me, it’s not just about menopause; it’s reevaluating all this material we’ve been given about what it means to be a woman, and what we’re supposed to do at different parts of our lives. So, I just want to say everybody’s welcome even if they’re not of menopausal age. We just have a really fun time.

That’s kind of how my mind works. Books become a show, which becomes radio commentary, then a show. All the things play into one another.

You often take a scientific approach to these topics.
In this menopause journey, it’s been interesting to look at the science of menopause. You can do all of these tests on women, and you will have no idea what’s actually going on with them because I think the mind and body and spirit are connected in some pretty interesting ways, for women, particularly. During perimenopause, people will very dismissively say “ah, it’s just hormones,” but hormones are a huge factor in the chemical composition of our body: Do we feel energy? Do we feel drive? Do we feel depressed? So I think that people are still trying to learn more about the relationship between chemical balances and how we feel; we don’t really understand it at all yet.

That mind-body-spirit connection is often trivialized in our culture, as are women’s experiences in menopause. In writing this book, were you on some level looking to bring those experiences to the forefront?
I’m 53 now and I had that sort of trajectory of “in my twenties, I’ll be smarter than my teens, in my thirties, better than my twenties.” I just thought each decade would escalate upwards in terms of maturity and money and career: “I’ll be Maya Angelou by the time I’m 50! And my face will be on a coin from the Smithsonian!”

And so when I got to the middle of my life where I was like 46, and had this huge breakdown where my marriage exploded, and I didn’t know who I was, and I fell in love with my business partner of ten years, that was just really unheard of.

And there’s still somewhat of a taboo surrounding menopause, even though it’s a totally normal biological process that all women eventually experience.
I am guessing, because we’re in the Cheryl Sanberg Lean In era, and women still make 71 cents on the dollar, we don’t want to give up the gains we’ve made in the workplace. And somehow, part of that is not admitting that mood swings or hormones exist, I mean there’s sort of the latent thing where we want to be like men—everyday is the same, no mood swings, no fluctuations, etc.

But I think men also have a full spectrum of emotions that they experience in midlife, but don’t talk about. I know that in the last few years, David Foster Wallace, Robin Williams, Phillip Seymour Hoffman—these talented, amazing artists really had some difficulty either with their mood or depression in their 40’s and 50’s. So maybe we can just all admit we all feel a whole range of things and that’s ok.

Do you have any words of wisdom for women who are in the midst of menopausal chaos?
I think it’s really a matter of just letting all your standards drop. I think that women have so many “shoulds”—we work, we are in relationships, we parent, we take care of our older parents, we email, we try to keep up on our tweeting, oh, and don’t forget to exercise and be a perfect size 3—there’s a lot that we’re all trying to do at once, and we push forward as if that’s normal. And when menopause or perimenopause comes on you, there are days when you just can’t get out of bed.

And that’s sort of the beginning of wisdom to go “why can’t I get out of bed? Maybe I can take a morning off, or an afternoon, or a day or a weekend.” I think it’s an opportunity to look at your priorities and question how much stuff you’re actually supposed to balance.

10 Awesome and Interesting Things to Do This Weekend, 6/17