Home Awards Watch How the SAGs and the Globes Differ—and What It Tells Us About... 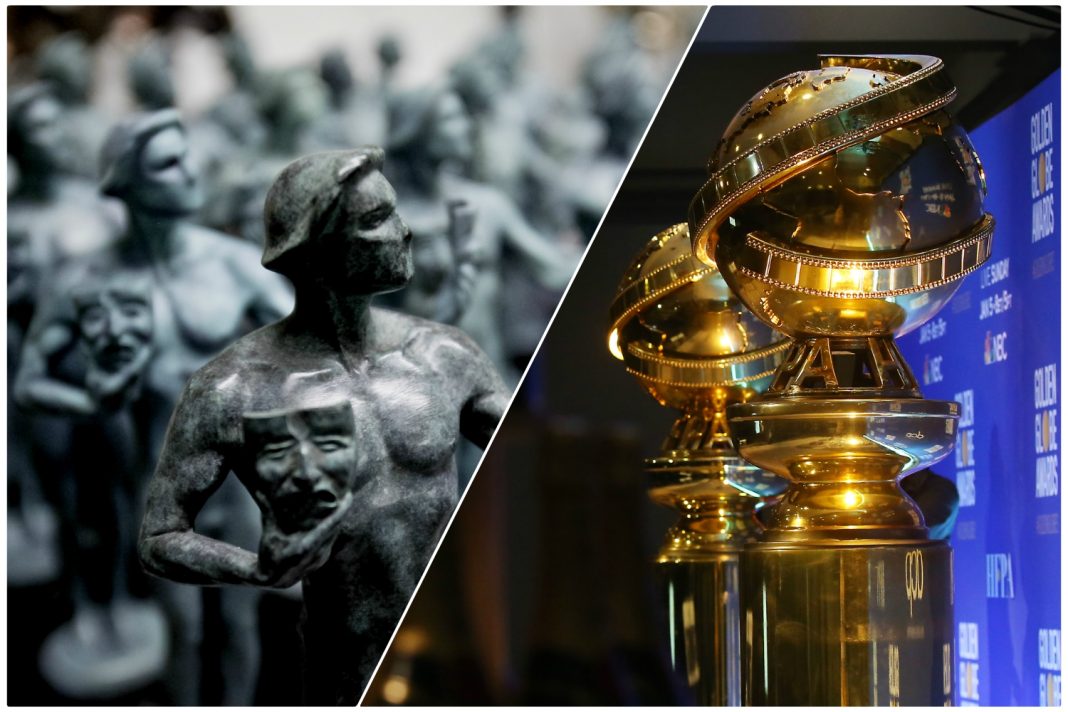 We’ve been pummeled by awards announcements roughly every day for ten days, but now two of the pre-Oscars biggies are out: first the Golden Globe noms and, yesterday, the Screen Actors Guild Award nominations.

The SAG awards tend to differ from both the Globes and the Oscars, largely because of the size of its voting body, which comprises the approximately 160,000 performers represented by the Screen Actors Guild. Still, they’re a good bellwether for what will go down at the Oscars since the very actors voting for the SAGs will vote in the Academy Awards’ acting categories. As GoldDerby.com reports, “In each of the last two years, the SAG Awards foresaw 15 of the eventual 20 Oscar nominees for acting. In 2017 and 2015, it went 17 for 20 while in 2016 it previewed a lucky 13. In both 2014 and 2013, the guild nominated 14 of the performers who went on to contend at the Academy Awards.”

Naturally, there was a lot of Globe-SAG nomination overlap: In the battle of the studios, Netflix was the most-nominated entity at both awards (34 nods from the Globes, and 20 from SAG in both film and TV). But there were some notable differences in what was favored by the Hollywood Foreign Press, the organization that doles out the Golden Globes, and the Screen Actors Guild.

For one thing, the since SAG doesn’t hand out separate awards for dramas and musicals/comedies, movies like Dolemite Is My Name, Knives Out, and Rocketman didn’t score Best Picture nods. But Bombshell had a much better showing in the SAGs, which means its Oscar chances just improved a hell of a lot. Charlize Theron is in the Best Actress SAGs category, while co-stars Nicole Kidman and Margot Robbie are competing for Best Supporting Actress.

In the very intense Best Actor category, both the Globes and SAGs named Christian Bale, Adam Driver, and Joaquin Phoenix, so it seems their changes of being Oscar nominated are solid. In the drama category, the Globes added Jonathon Pryce for The Two Popes and Antonio Banderas for Pain and Glory. The SAGs, on the other hand, cut those two out, adding Taron Egerton (Rocketman) and Leo DiCaprio (Once Upon a Time in Hollywood). And neither the Hollywood Foreign Press nor the Screen Actors Guild acknowledged Robert DeNiro (The Irishman), which doesn’t bode well for his Oscar chances. DeNiro is, however, getting the SAG Lifetime Achievement Award, so he can’t feel too badly. Adam Sandler, whose performance in Uncut Gems is being hailed as Oscar worthy, didn’t get a nomination from either group.

Interestingly, both the Globes and the SAGs have the same Best Supporting Actor list, except for one slot: SAGS have Jamie Foxx for Just Mercy, and the Globes, Anthony Hopkins for The Two Popes. Otherwise, both lists have Tom Hanks, Al Pacino, Joe Pesci, and Brad Pitt—each of whom has at least one Oscar already on his mantle. Brad Pitt’s isn’t for acting, though—it’s for Best Pictures 12 Years a Slave and Moonlight, both of which he produced.

The way the SAG Awards handle “Best Picture” is by calling it “Best Ensemble Cast.” That’s because, once again, the SAGs are all about actors. Parasite is one of the five films on that list, and it’s the very rare foreign film that SAG has put in this category—not even Roma made the cut last year. Parasite’s shot at Best Picture Oscar noms for both foreign film and best picture—like Roma—seems all but guaranteed.

At both the SAGs and the Globes, two end of the year “awards season” films—Little Women and Cats—got almost entirely shut out. Saoirse Ronan got a Globe nom in the drama category, but no love from the SAGs. Nor did co-star Timothée Chalamet, Mr. Oscar-bait himself, get a SAG or Globes nod. Director Greta Gerwig probably isn’t thrilled.

In television, The Marvelous Mrs. Maisel and Fleabag walked away with the most SAG nominations. The Golden Globes has zero network stars among its TV actor nominations, while SAG has one: Sterling K. Brown for This is Us.

The SAGs had some wild snubs too. Julia Louis-Dreyfus and the Veep ensemble got no SAG love at all. Neither did Meryl Streep for her major role in Big Little Lies, nor big Emmy winner Billy Porter from Pose. And neither of HBO’s current prestige dramas, Succession or the newer Watchmen, got a SAG nom. However, Jharrel Jerome, who got an acting Emmy for Netflix’s When They See Us, didn’t get a nom from the Globes, butrecovered with a SAG nom.

RELATED: Snubs and Surprises from the 2020 Golden Globe Nominations

Responding to Backlash, the Group Behind the Golden Globes Admits Six Black Members