Home Entertainment Industry Netflix Made a $300 Million Deal with Ryan Murphy. Maybe It Should... 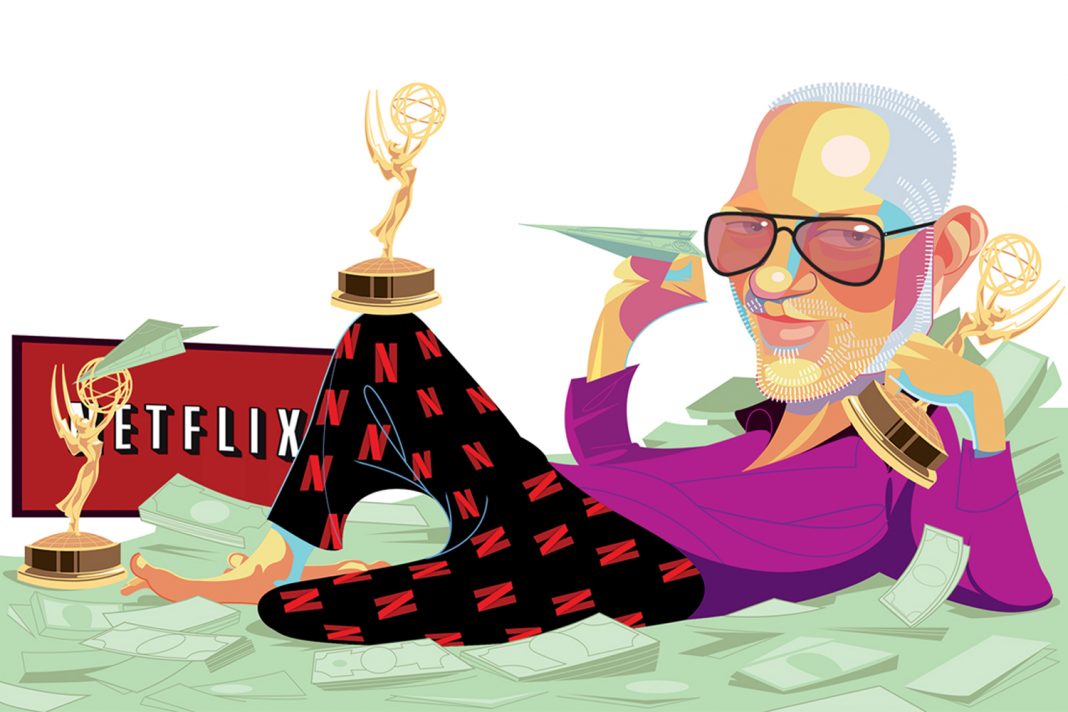 The widely panned recent Netflix series Hollywood says many things about the state of television these days. Set in postwar Los Angeles and following an assortment of young aspiring stars as they navigate the caprices of the movie business, the show is good-looking and glossy—like most big-budget TV these days—photographed in an amber glow and production designed to the last resplendent digital bit. There is solid acting from veterans like Joe Mantello, Patti LuPone, Dylan McDermott, Holland Taylor, Mira Sorvino, Rob Reiner, Michelle Krusiec, and Jim Parsons, who steals scenes effortlessly as a ruthless agent wielding power when he’s not Salome dancing his way through each of the seven veils. Too bad the writing careens between the barely acceptable and the defiantly awful—startling given that the show’s creator is Ryan Murphy, two years into a widely publicized $300 million deal with the streamer.

Despite his big payday and half dozen Emmy awards, Murphy has been overrated for decades. Go all the way back to his network breakthrough, Glee, and he already was penning lines like, “Music sets my soul on fire.” Watching earlier successes like Nip/Tuck and American Horror Story, it was already evident that he can’t write original stories or real characters, by which I mean the sort defined by the depths and contradictions that distinguish all of us from stereotypes. As a result, almost all the people in his shows tend to be jerks or fools or bullies who are engaged in shallow quests for fame or power or beauty. His first big-budget Netflix bonanza, The Politician, was greeted with a collective shrug when it premiered last fall—despite being heavily promoted and having a big-name cast that includes Ben Platt, Gwyneth Paltrow, and Lucy Boynton. Picking up on themes better explored in Alexander Payne’s Election 20 years ago, the show fails to grasp what drives someone like Platt’s presidency-fixated lead, maybe because so many of Murphy’s characters are narcissists that their creator doesn’t seem to know the difference between Platt’s kind of self-obsession and all the other types.

Murphy’s writing has shown an inclination to get not better but lazier, and Hollywood is a perfect example.

Increasingly Murphy’s writing has shown an inclination to get not better but lazier, and Hollywood is a perfect example: a first-draft mishmash where people in the 1940s say things like “I’m livin’ the dream” 60 years before people said that; where handsome young men become rent boys to buy houses because apparently no GI Bill exists; where racial sensibilities feel straight out of 1997 rather than 1947—not because Hollywood doesn’t know racism existed but because it’s oblivious about just how deep it went.

But Murphy has succeeded because he’s a zeitgeist writer. Whether it’s the lure of celebrity, politics, cosmetic perfection, or the ultimate kink, Murphy—a journalist before he got into TV—possesses a knack as keen as anyone’s for reading the hive mind. He personally finds irresistible the same things the rest of us find irresistible, and he’s been canny enough to populate his concepts with first-rate performers who carry the writer’s load for him: Jane Lynch, who deservedly became a star in Glee; Jessica Lange, who jump-started her career with American Horror Story; Angels in America’s Mantello plumbing depths as Hollywood’s not-so-clandestinely gay studio boss, the walls of his closet closing in on him. It’s on matters of gender and sexuality that the new Netflix show is most persuasive and on which the series progressively anchors itself to better effect, though it’s no revelation by now that a secret gay history of the movies was written by directors like George Cukor and composers like Cole Porter and stars like Rock Hudson. Hollywood plays as farce early on—Glee as a 1940s period piece with grownups—but gradually becomes more serious as it explores that history.

Since the outset of his career, Murphy has gone where few have before when it comes to material regarding sexual identity. The barriers he’s broken are no small things, and for that alone he’s earned at least one of those six Emmys. Nonetheless, Murphy is also emblematic of everything that’s going wrong with the medium. Twenty years ago, as movies began to fade into overblown comic-book adaptations, we entered a fabled “golden age of TV” based on the notion that TV had become a writer’s medium in a way film hasn’t been for nearly a half century. This was proved most consistently by The Wire, Breaking Bad, and Battlestar Galactica, more sporadically by The Sopranos, Mad Men, and Game of Thrones, and more recently by Atlanta, The Handmaid’s Tale, and Killing Eve.

To be fair, if Murphy represents the ultimate in concept TV, all those other shows had their concepts, too. In those cases, however, the concept was a premise not a pursuit, a place where narratives were born rather than where they went to die. “Big-budget TV” was an oxymoron before Game of Thrones became a phenomenon; its production values and flat-screen TVs grew in tandem. Now TV—albeit on a smaller scale but also a more accessible one—risks becoming the medium of spectacle that movies have become, especially in an era that will remain socially distanced to some degree for as long as we can foresee. The result is the glossy mediocrity of shows like Westworld, The Mandalorian, and, yes, Hollywood; all the money is for the eyes to see and occasionally the ears to hear and almost never the brain to think about.

I don’t begrudge any writer getting wealthy. I begrudge the shoddy writing Murphy has done with his fortune that further corporatizes creativity. Networks, studios, record companies, and publishing houses make these doomed deals because they don’t understand creativity and have for it the contempt that comes with incomprehension; creativity remains some dark alchemy they resent all the more for how much it can’t be bought. Studios never pay for the next great idea. They pay for the last good idea that they hope to God will be as much like the next idea as possible. Ryan Murphy earned his $300 million not by virtue of his writing but by virtue of convincing Netflix to give it to him, which might have been the most creative endeavor of his life.