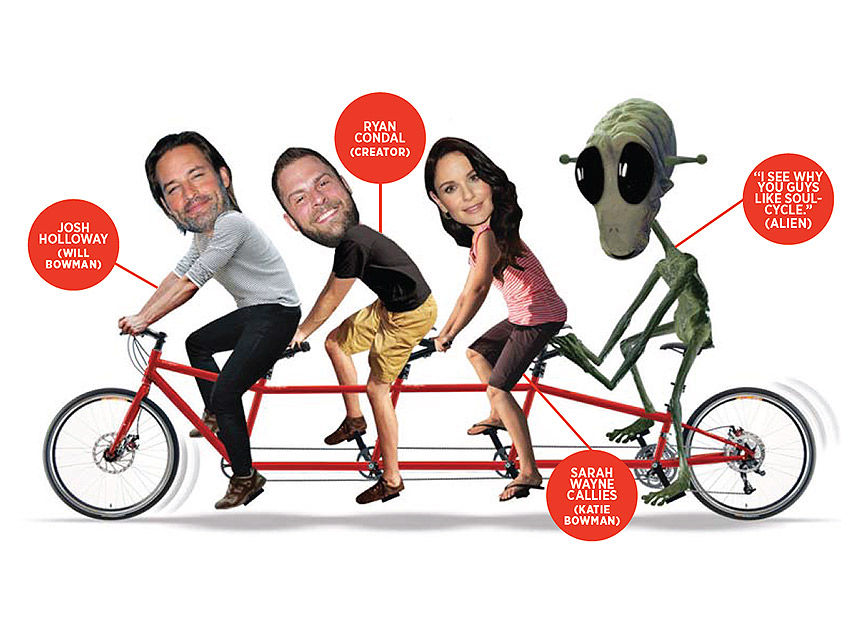 A new year calls for a new and emotionally fraught television sojourn. Set your DVR for Colony (premieres January 14), a slow-burning thriller from Ryan Condal and Lost producer Carlton Cuse about aliens who have occupied L.A. Even more improbable: The regime demands Angelenos travel by bicycle. Condal and stars Josh Holloway (Lost) and Sarah Wayne Callies (The Walking Dead) weigh in on three of the show’s more intriguing choices.

Condal: L.A.’s geography is interesting for this. New York is more segmented; here neighborhoods butt up against each other, so you get different looks without having to leave. Plus because production has left L.A. in a big way, seeing the city as a character is a novelty.
Holloway: Also, L.A. is a melting pot. Someone from Korea might deal with occupation differently than someone from Armenia.
Callies: And let’s be honest: L.A. is an alien landscape anyway. I feel like I’m being occupied every time I come here.

Callies: What do you think of when you think of L.A.? Traffic. It’s a quick way to tell the audience we may be in Kansas, but this isn’t the Kansas you’re thinking of.
Condal: The car is the very emblem of freedom. To take that away is injurious to the American spirit, specifically in L.A. It’s a psychological strike.
Holloway: People drive to the bathroom here. Take everybody’s car and you pretty much cut their legs off.

Condal: I wanted to do a true Orwellian show. The more you remove the audience from feeling like this could happen tomorrow, the more willing they are to eat their vegetables and enjoy it.
Callies: Science fiction allows us to ask dangerous questions. Is it really better to die standing than to live on your knees? James and Lily Potter stood up to Voldemort. Just saying.
Condal: Is that a Faulkner book I missed?
Callies: Yes, The Very Old Man and the Wand.

In Search of “Lost” Time: Fans Still Have Burning Questions at PaleyFest Panel